You Really Want to Get Local? Look to the Salt Shaker

Intrigued by an article in our Fall 2014 Issue, the writer visits Kim Dyla and learns to make salt. • Photograph by Gianna Volpe 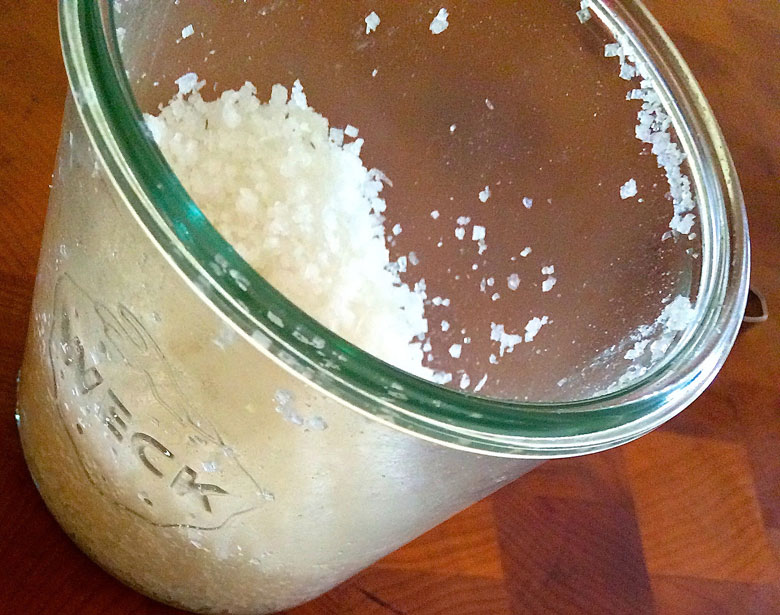 Kim Dyla’s journey toward sustainability, which began in 2008 when she and husband, Bill, moved to Southold, has been one of foodie knowledge growth so exponential that we featured the couple in our fall edition of Edible East End. Then I met Dyla at last month’s first annual farm dinner at Browder’s Birds Mattituck homestead, and it became obvious a how-to companion piece for the print article had become entirely necessary.

At the farm dinner, Dyla was telling folks how she makes her own North Fork sea salt and, my friends, it really couldn’t be easier to do.

“You just gather a gallon of water from the Sound — or wherever — and place it in a shallow pan in the sun,” Dyla said. “I put mine behind my couch. I collected the water from both Soundview and out at Orient Point.”

The fact that I hadn’t thought to do this before considering my elementary understanding of the water cycle made me feel foolish, but not enough to keep me from wanting to try it out myself.

On Monday, I met up with Kim Dyla to learn more, but it really is as simple as placing water in a shallow pan and scraping up the salt after the water evaporates.

“Two gallons will only yield about a cup, or 8 ounces, of salt,” she said we walked into her kitchen after inspecting her newest home-grown honey bee venture and nearby garden in all it’s cornucopial glory. “I really only use it as finishing salt on top; it’s just for the fun of it — like acorn flour.”

She then excitedly passed me a plastic bag of exactly that – acorn flour. I was astounded. Who the heck was this woman and how could I ever hope to become as cool as she?

She told me “No” so matter-of-factly and added she’d only been growing food outside a small herb garden in Chicago since 2008; I realized in that instant that Kim Dyla is my hero. And I’d known her for — oh, I don’t know — three minutes, maybe. “Hero sounds much better than obsessed with ingredients,” Dyla later said. “Which I am.”

“Have you ever had an experiment just horribly fail,” I asked as I took a deep whiff of acorn flour. “Yes,” she told me with the same honesty and forthcomingness that made me realize she wasn’t just my hero, she was also my favorite person to interview. “I actually just tried making pasta with the acorn flour,” she said. “It turned into cement.”

I still had the plastic bag of dark powder in my hand and after taking another sweet and spicy inhalation, I recommended she try using the acorn powder to bread turkey or chicken. I was pleased to find (thanks to Facebook) that by the next day, she had.

The Southold resident’s salt making is already evolving. Most recently, she smoked bacon next to an open jar of the stuff to yield “bacon smoked sea salt.”

In solidarity, I plan to evaporate my own batch of Long Island Sound into North Fork sea salt shortly after I move back to Mattituck this week, because I think I’ve caught the Dyla bug, an obsession with home-grown ingredients that nestles quite nicely into our East End agricultural mecca. In addition I’ll be waiting for Dyla’s milk jam to hit local farmers markets, because she gave me a tiny jar of that sweet stuff, and I’ve already identified it as the perfect thing in which to dip sliced apples. But that’s another story altogether.