Learn to make classic dishes in your own kitchen. 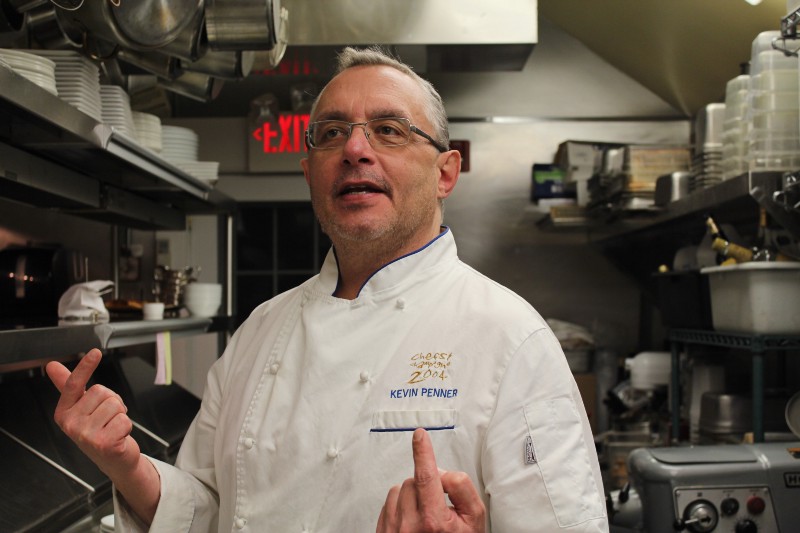 Aside from wine tasting and beer tasting and tapas tasting and burger specials, one good winter activity stands out: cooking lessons. And as the restaurant scene on both forks continues to grow and mature, we’ve got a lot of chefs who are willing to share their expertise while the demand for reservations slows. Chef Kevin Penner, longtime master behind stoves in East Hampton, who recently retired and then came out of retirement to help chef Gerry Hayden as he lives with ALS at North Fork Table in Southold, has decided to spread some knowledge, and he will do it in your own kitchen.

Edible: I understand you are offering cooking classes this fall and winter?

Penner: I am. Over the last several years while working in restaurants I have had a lot of customers request cooking instruction. I am at a point now where I have time, and it works for me because I like teaching.

Edible: So, where are the classes being offered?

Penner: I am offering them in the students’ homes. I think this makes the most sense because when people cook that is where they do it. Not in a professional kitchen with equipment that they have never used before.

Edible: What is your motivation for offering cooking classes?

Penner: There are a lot of reasons to do it. From the perspective of a chef working in restaurants, it is always nice to have educated and adventurous diners in the dining room. It allows me to flex a little creativity with menus and specials and know that I can sell these items. Some of the items are really old school but as people have become distant from their food and its sources, the demands of the diner have become a little mundane.

Edible: Can you elaborate on that statement?

Penner: Sure. Let’s think about where we live and think back to some of the pioneers of cooking who came before us. People like Pierre Franey, Craig Claiborne and John Ross, for example. In the 1970s and 1980s, these folks were cooking sweetbreads, veal kidneys, skate and much more and they had an enormous following. If I put those items on a menu on the East End now, I might be able to sell a little skate. Forget about the rest of it.

Edible: OK, so you want to teach people to cook esoteric things?

Penner: No. I want them to think about using the whole animal and that with the proper instruction almost any part of an animal can be a delicious revelation. I also want to teach them about seasonality because it is so incredibly important. If you go to your favorite burger place, do you really need a tomato to be part of the equation in February? If you really love the local bay scallops, do you want to have them during the summer? Is a Caprese salad in March really something that someone needs to eat? Unless people are actively engaged in gardening and cooking, they might not know about the limitations seasonality entails.

In the 1970s and 1980s, these folks were cooking sweetbreads, veal kidneys, skate and much more and they had an enormous following. If I put those items on a menu on the East End now, I might be able to sell a little skate.

Edible: Alright, I get it. So, you will offer cooking classes in people’s homes and you will teach them about cooking and eating seasonally, and probably sustainably. These topics are pretty popular right now. What makes what you are offering unique?

Penner: After 30-plus years of cooking, I can reach back to the past and reintroduce people to a way of cooking sustainably. I think these things have only been forgotten. They are certainly not lost, because there are enough of us old folks around. Since I am still cooking, we can connect the past with the present by introducing new technologies to resolve old cooking issues. I can also bring a lot of food science information to people who want to learn about it, and I will teach them how to handle food safely.

Edible: All right, let’s move on to specifics. The classes will be offered in the homes of the students. How much are you charging?

Penner: The classes are $80 dollars per hour for a one-on-one session. If students want to invite friends, I will teach additional students for $20 dollars per hour. The minimum amount of time for a class is two hours, because less time is not productive. So two people for two hours will cost them $100 each. Two hours is most productive because the students will be buying the products for the course, which means that I will be going with them to source the food. This is one of the most important things when someone wants to cook well. Sourcing it a very important part of the process.

More information about Chef Penner’s cooking classes is on his website.