My Experience With Lyme

Lyme expert Gerald Simons will speak on November 12 in Bridgehampton. 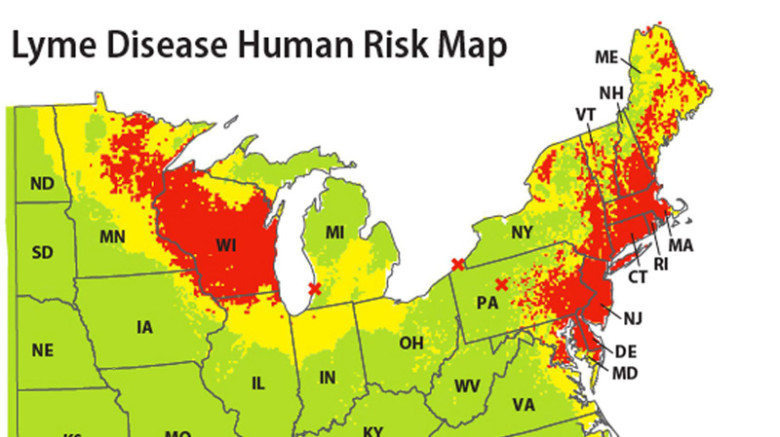 Lyme disease is often on our minds at Edible East End, because many of our staff and readers have suffered from it. And because of the larger issues surrounding it: an exploding deer population, ecosystem disruption, the risks to gardeners, farmers and others who work outside. Here Geraldine Pluenneke shares her personal experience with the illness.

Perhaps you were bitten by a tick as you raked the lawn in September but, thank god, tested negative for Lyme disease a few weeks later. Or maybe you don’t even remember a tick bite. But now it’s November and you have migrating aches and a slight fever or ongoing fatigue and depression that came out of nowhere. You have good days and bad days. This couldn’t possibly be Lyme, could it? Your Lyme tests were negative — twice!

Unfortunately, it could be. And if it turns out it is, East End practitioners experienced with Lyme say immediate treatment is urgent. You may be one of the cases of hidden Lyme and its co-infections who falsely test negative. The cost of waiting can run high. A negative ELISA (enzyme-linked immunosorbent assay) test is meaningless in diagnosing Lyme disease according to Lyme expert Gerald Simons. Use of the western blot test also falls short.

Simons will address such issues during a talk on “What You Need to Know about Tick-Borne Diseases” at 7:30 p.m. Wednesday, November 12, at the Bridgehampton Community Center. Simons, a PA-C at Manhattan’s Morrison Center, at East Hampton Family Medicine and at East Hampton’s Urgent Care Center, who often draws standing room only crowds at talks, speaks from experience. In 2012, he was honored as the outstanding Lyme practitioner in North America by the Turn The Corner Lyme Foundation which has evolved into TBDA, the Tick-Borne Disease Alliance. Simons calls the Center for Disease Control’s recent estimate of 300,000 new American cases of Lyme disease annually (adjusted upward from 30,000 reported by the CDC a year ago) still much lower than reality. “It’s probably at least 900,000 new cases, with an equal number of new undiagnosed cases of Lyme,” says Simons.

Because current tests often lack the sensitivity to detect slow-growing spirochetes and there are so many yet-to-be identified strains of Lyme disease and because tick-borne co-infections can confuse the picture, physical examination by a doctor experienced in dealing with Lyme is the only way to accurately diagnose Lyme. Concern by East End doctors about the lack of awareness by both the public and  by many in the medical communities about the dramatic increase in tick-borne diseases and how to treat them led to last summer’s launch of Southampton Hospitals’ Tick-Borne Disease Research Center. Simon’s talk will be the third in a series of informational seminars.  This blog post summaries some of the concerns of doctors affiliated with Southampton Hospital.

“The spirochete is actually exquisitely sensitive and can be killed with antibiotics,” says Montauk MD Anthony Knott who has been dealing with a growing avalanche of bites for 11 years. Antibiotics are 97 percent successful when Lyme is treated in the first days after a bite. But let two or three or five or six months go by and the story is different, though many more months may pass while the Lyme lies hidden and dormant. It is also ancient. It’s been around some reachers estimate for 15 million years. Its spiral, corkscrew shape is kin to syphilis and malaria. So, too, is its ability to evade its host’s immune system and bide its time.

“[Entrenched] Lyme hides deep in the body [in tissues and muscles] after it leaves the blood and later invades the immune system,” says Simons. The spirochetes, which encrust themselves in a plastic-like coating which make them impervious to antibiotics, may lie dormant for years, then emerge and suddenly strike. On Nov. 12, Simons will talk about: multiple tick borne infections, of some of the reasons why Lyme disease can escape detection as it undermines your nervous system, your mind, your stamina, and finally your immune system; how treatment may require extensive antibiotics and herbal alternative drugs and ways to protect yourself in the first place. The evening is sponsored by the Noyac Civic Council under the auspices of the Tick-Borne Disease Resource Center of Southampton Hospital. The Tick-Borne Disease Alliance, whose Turn the Corner arm honored Simons, is currently merging with the Lyme Research Alliance.

The Lyme community abounds with stories of patients diagnosed with multiple sclerosis, mental illness, chronic fatigue syndrome, fibromyalgia, rheumatoid arthritis and lupus who began to get better after they were treated adequately for tick-borne diseases. “Syphillis used to be the great imitator. Now it’s Lyme disease,” says Knott.  It can mimic central nervous system diseases like MS or meningitis. It can mimic dementia or mental illness. “One example of a fooler was a patient whose family and I became convinced she was in the late stages of Alzheimer’s dementia,” he says. The patient entered a nursing home that shortly received a positive reading for a Lyme test Knott had taken just before her entry, and she was treated. “She walked into my office three months later and all symptoms were gone.” He pauses, shakes his head, “Lyme is now the great imitator. I’ve had a couple of cases of carpal tunnel (syndrome) that turned out to be Lyme disease.” Meanwhile a controversy rages in medical circles — essentially between infectious disease quarters and the “Lyme literate” over the quantity and kind of antibiotics necessary to kill tick-borne disease and its diagnosis. I have interviewed more than a dozen people — including a former publisher of a national magazine who at one point was confined to a wheelchair — who went from doctor to doctor only to be told they didn’t have Lyme, that what they were experiencing was all in their minds, before they found doctors willing to treat them aggressively enough to cure them. I also have an artist friend, a patient of Simons who was diagnosed by two neurologists as having MS before she recovered when treated for Lyme. I discovered after I was diagnosed with an unsuspected, hidden case of Lyme.

Why Lyme Tests Can Be Inaccurate

In 2003, when Tony Knott, the new doc in Montauk, began treating suspected Lyme patients he followed the CDC guide, a couple of capsules of doxycycline for a newly attached tick — an apparent safe bet especially for patients who tested negative — and a maximum of 28 days of antibiotics for those with a rash or bull-eye. “Then a few weeks later [the negative testers] often would come back ill,” he says. Then he watched case after case where patients had tested negative for Lyme get better on antibiotics. He learned to distrust negative tests and that diagnosis must depend upon clinical examination.

“One of the problems with respect to lyme is that it’s in its infancy in terms of basic science research. That includes the accuracy of our testing and and what we are, in fact, testing for,” says Knott. “If you do have a positive blood test that’s helpful, but you have to question an ELISA that’s negative. Is the test not recognizing species that go under the radar? Is it not recognizing a microorganism or a species of Borrelia that it’s not equipped to measure? We don’t have such a great handle on how our immune system [acts] in both its inflammatory reaction and in creating auto immune disease which in turn creates these symptoms after the lyme spirochete has been treated and killed,” he adds.

I never dreamed as I watched the riveting documentary film, Under Our Skin, that it might apply to me. My periodic Lyme tests during physicals were negative. I had no apparent symptoms. Like 50 percent of people bitten by Lyme-carrying ticks, I was unaware of any bites. Like 70 percent, I had no tell-tale red bull’s eye rash. Researchers estimate that between 30 to 70 percent of ELISA negative results are false negatives. Then I was being rushed by ambulance from Southampton to Manhattan’s New York Presbyterian Medical center. I spent nearly two weeks in the cardiac ward of New York Presbyterian Milstein Hospital under the care of one of its top cardiologists receiving the start of a month’s treatment with two high-powered intravenous antibiotics to kill some form of Lyme that had attached itself to my mitral heart valve. Later one of the country’s top infectious disease specialists, who helped supervise my extensive hospital tests, diagnosed me as having late Lyme.

According to CDC estimates, this makes me one of 300,000 Americans of newly reported U.S. Lyme cases annually in which Lyme spirochetes attack the heart. By Simons’ estimate it makes me one of 9,000 Americans. Forebodingly, the CDC recently reported that since late 2012, three apparently healthy young adults aged 28 to 36 with no symptoms of Lyme had sudden deaths that were subsequently attributed (during tests for using their hearts as transplants) to hearts damaged by undiagnosed Lyme carditis. I am lucky, incredibly lucky. I’ve spent the last year and a half on and off antibiotics and taking a battery of supplements that are slowly repairing my battered immune system. My only symptom had been weakness in my legs and resulting falls that I blamed on a severed ACL ligament. I’d tested negative.

Experts like Richard I. Horowitz, MD, author of Why Can’t I Get Better: Solving the Mystery of Lyme and Chronic Disease, published in Nov. 2013 by St. Martin’s Press, who treated more than 12,000 patients with chronic Lyme, tells of seeing patients who have gone to up to 20 specialists before finding successful diagnosis and treatment. Horowitz practices in Hyde Park in Dutchess county in the Hudson Valley, a hot bed of Lyme and and co-infecting babesios, but has patients world-wide. Anyone who has experienced any of the strange, migrating symptoms of some tick-borne disease may find this Poughkeepsie Journal video interview with Horowitz a gripping three-quarters of an hour of viewing.

One obstacle in treating Lyme aggressively has been fear among many New York State doctors of an investigation by the state’s Office of Professional Medical Conduct for overprescribing antibiotics for tick borne diseases. New legislation, which passed both the New York State Assembly and Senate by last June and now awaits the signature of the governor, will protect physicians from disciplinary action in treating cases of long term Lyme and authorizing treatment of these patients. If you suspect Lyme or are wrestling with strange symptoms and your doctor says your Lyme tests were negative,

“Empower yourself,” says Simons. Learn about Lyme. Read and print out the published, peer reviewed studies from sites like the TBDA which is merging with the Lyme Research Alliance;  Lyme Net; The International Lyme and Associated Diseases Society; Lyme Disease. Org  which publishes the Lyme Times; the CDC’s list of Lyme symptoms; The Lyme Disease Association.Inc;  The Tick Borne Research Center of Southampton Hospital  and social networks like the Long Island Lyme Association. Phone Southampton Hospital Tick Research Center for guidance in finding a doctor well-versed in tick treatment, 631-726-8425.

Most link to a list of Lyme literate doctors — shorthand for practitioners experienced in treating Lyme aggressively with pharmaceutical or herbal drugs or both with an awareness of the inflammatory and toxin load Lyme can trigger. Hand your findings to your doctor. If he brushes your concerns aside?