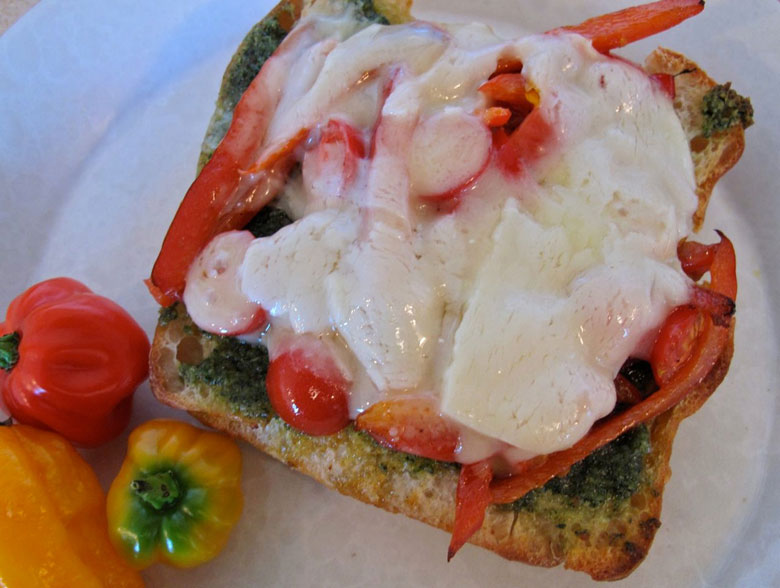 I think there is nothing better, on a chilly autumn day, than a hot sandwich. Better yet, is one made with home-grown ingredients. In fall, there is still kale in the garden and hardy herbs and peppers. These can be bought—if you don’t grow them yourself—at local farm stands, many of which are open until Thanksgiving, or later.

Peppers don’t have to be roasted to be the perfect sandwich ingredient. They can be sliced thinly and “roasted” in a cast iron pan. Sprinkle a little granulated dried garlic and sea salt, as you stir (yes, you read that right: dried garlic), and you’ll get a full, sweet, browned effect similar to roasting on a grill or in an oven, except in less than half the time.

I’m a picky sandwich eater. I hate anything dried out, have a personal pet peeve against a low cheese-to-other stuff ratio and have been known to take apart a sandwich and put it back together “properly” (OK, I might actually do that with every store bought or deli sandwich). My best friend is fond of telling me, “You eat like a cat.” Take what you will from that description, but it feels right to me. If, like a cat, I can’t hunt for my own lunch, then I’m always happy to make it.

My favorite spread—for sandwiches or anything else—is kale pesto, and no one makes it better than the kids at Hayground School. In summer, it’s the first thing at their stand at the Bridgehampton Farmers Market that sells out. The recipe for it is here.

For this sandwich, you’ll want all your ingredients to be warm before you toast the cheese on top, because there is nothing more terrible than a top-hot sandwich whose insides are cold—we’ve all had one of those. I usually lightly toast my ciabatta or baguette or other crusty bread first, then spread the pesto, layer the peppers and tomatoes, and then top with cheese and throw back into the toaster until melted. This is a hearty sandwich that needs nothing except maybe a simple spinach salad on the side and a mug of ginger tea with raw honey. 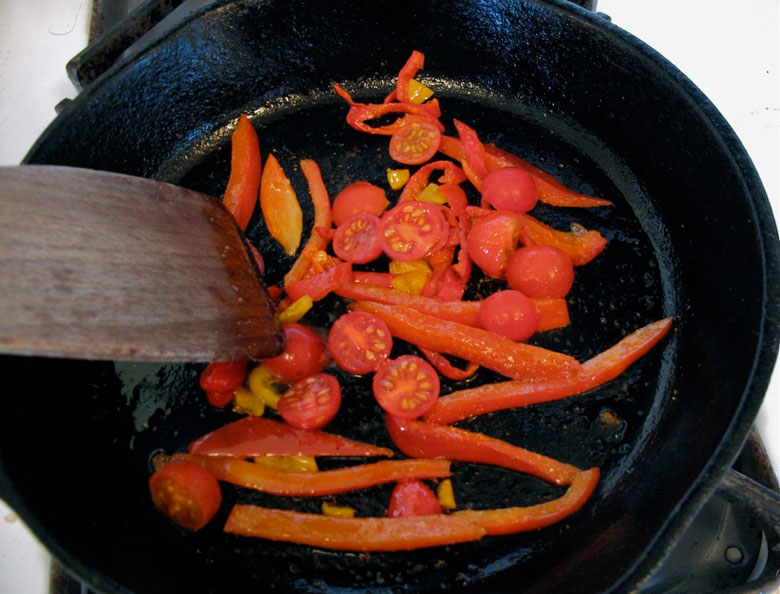 Roast peppers with olive oil, garlic and pinch of sea salt over medium-high heat in cast iron pan. When peppers soften and brown, add tomatoes and stir again, then turn off heat. Toast bread lightly. Spread pesto on bread generously, arrange warm pepper/tomato mixture, and top with cheddar. Put back in toaster for a minute or two, until cheese is melted. Serve with simple spinach salad.