How They Roast a Pig at Topping Rose House

A chef’s love affair with a pig roaster. 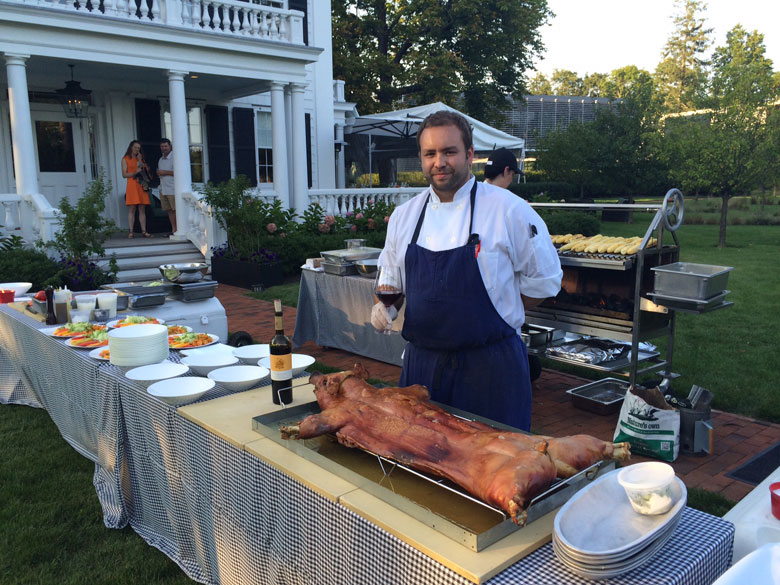 Chef Kyle Koenig shows off the results of his roast. • Courtesy photo

Everything about the Topping Rose House is perfection but their pig roast is out of this world.

Texas-born chef de cuisine Kyle Koenig gets to play with his new toy, La Caja China, and you, my friend, can benefit from his obsession. This fall, the chef, brought that bad boy out of the barn to roast pigs and will continue to do so once a month on Sundays from January through March. A lamb roast will be on Sundays in November and December. The meal is served family style. UPDATED schedule below.

One Sunday, Koenig and his assistant adjusted the top grill, piled with dying embers, over a 60-pound porcine. “We want the back legs to crisp up a little more,” he says.

While the cooking process was on its last legs and visitors sat comfortably in Adirondack chairs sipping Wölffer wine, the chef snuck off to show guests the edible garden, grown by Jeff Negron.

The “farm,” on the other side of the parking lot, is breathtakingly beautiful and from whence all the vegetables and herbs for the family-style spread come from: summer beans, purslane, watermelon, basil, radishes, zucchini, eggplant, corn, heirloom tomatoes, cucumber, mint and dill.

Back at the barbecue, the pork, brined with salt, water, fennel seed, mustard seed, cinnamon, orange, thyme, bay leaf and a little honey was placed in the oven box of la Caja China, which was copied from a portable barbecue found in Cuba’s Chinatown. It’s made from plywood, lined with aluminium and topped with a grill.

The charcoals were started at 1 p.m. and by 5 p.m. the pig was cooked through and ready to flip, so the skin could get crispy. Once the crispy skin, or chicharrón, hit the table, it was the topic of conversation. “It’s pure fat,” said a woman, smiling, “I should know, I’m from Spain.”

“Fat is good for you,” said another guest as he reached across the table, “On a night like tonight, you gotta go for it.” It hasn’t been easy getting to the pig roast. “They were booked a month in advance,” the Spanish woman said.

In addition to whole pigs, the chef cooked a lobster bake in la Caja China. Lobsters were grilled on top while clams, mussels, corn, chorizo and purple potatoes steamed with seaweed in the box below. “It’s almost like digging a hole,” the chef said. Albeit a lot easier and a lot less sand in your food.

The southern boy is dying to get his hands on some fresh crawfish — not easy to do up north. “Crawfish boil is where it’s at,” he said.

We’ll have to wait until next summer for more shellfish. In the meantime, Topping Rose House is cooking up new ways to keep you happy all winter long. Hello lamb roast.

After individual peach pies for dessert, doggie bags were not given out, unfortunately. But what to do with all that luscious leftover meat? “We have Cuban sandwiches on Monday,” said chef Koenig.