Regulations and Using Spent Grain from Breweries for Cattle Feed

“Grain Elevator” — a piece I wrote for the Fall Issue of Edible East End — delves into the world of how spent brewer’s grain is downcycled into feed for many of our area’s farm animals. • Photographs by Randee Daddona 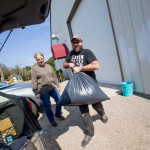 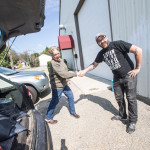 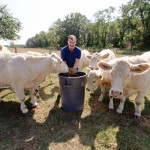 “Grain Elevator” — a piece I wrote for the Fall Issue of Edible East End — delves into the world of how spent brewer’s grain is downcycled into feed for many of our area’s farm animals.

Sources called it a symbiotic relationship symbolic of our fringe region’s tight-knit community attitude. But Hal Goodale of Goodale Farms in Riverhead said, he’s loved being able to keep feed costs down by giving spent grain to his farm animals but worries the days of free feed are nearing an end due to looming federal regulations.
Joseph Gergela III, who will soon retire as the executive director of the Long Island Farm Bureau after 26 years on the job, said he doesn’t believe is in any immediate danger of federal over-regulation based on a political climate sympathetic to the agricultural agenda.

Though tenets of an extensive FDA food safety reformation — known as Food Safety Modernization Act — initially threatened the hyper-local practice after President Obama signed it into law in 2011, Gergela said things are not likely to dramatically change on the East End any time soon.

“Using spent grain as feed is something that’s been practiced for years and years and something that I don’t think is an issue whatsoever,” he said. “I’m certain that Ag and Markets — if anybody — has nutritional and sanitary regulations regarding feed and grain to feed animals, but I haven’t heard of anything new as far as the regulation of that specific practice. It’s just about being able to handle it properly and the amount that’s being used. The farmers on Long Island that grow animals are not big farms, so it’s not going to present problems. If you’re a 3,000 cow dairy farmer, that’s a different situation.”

“[Governor Andrew Cuomo] is very, very committed to helping craft breweries, distilleries, wineries, cideries, etc.,” he said. “It’s about jobs and taxes, so the state wants them to flourish and be prosperous; and I believe that Steve Bellone, [the Suffolk County Executive] is of the same state of mind. He has been very, very supportive of the agricultural industries and he actually comes out and visits and does tours with us, so I think the support is there.”