The lowly sea robin gets the citrus treatment in this easy and elegant dish. • Photograph by Lindsay Morris

Yes, trash fish is on fire right now, and we got a big beautiful shot of a sea robin on the cover of our fall issue. But the fish is not just pretty, it tastes really good too. As Jerry Pluenneke found out when writing her story about sea robin, it can be made into anything, from bouillabaisse to ceviche. And she tried it all over a course of dinners. Here’s the ceviche recipe and a few pointers about how to clean the things. 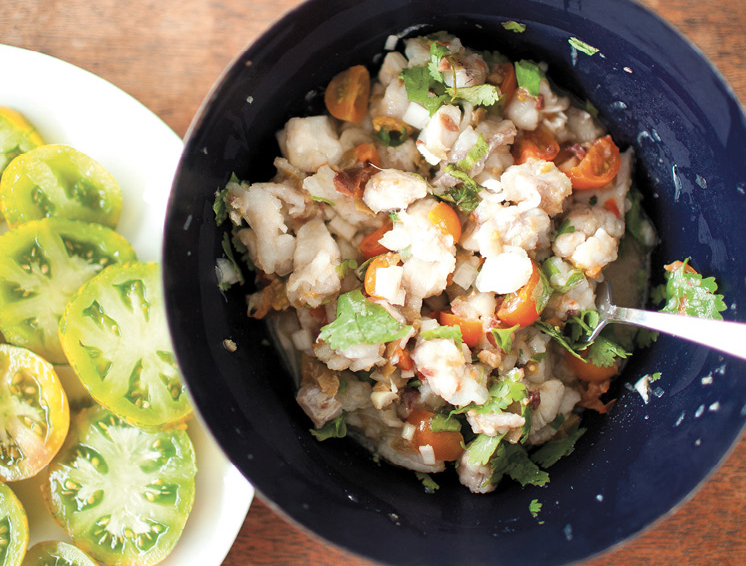 Sea Robin Ceviche
Adapted from Rick Bayless’s Season 7—Mexico—One Plate At A Time and a favorite at Bayless’s Frontera Grill in Chicago for more than 20 years.

This got a thumb’s up from every one at every sea robin dinner, a great starter to serve with tortilla chips. (If you are pregnant, the CDC now gives a go-ahead for eating ceviche, if you freeze the fish for several days before thawing and preparing the ceviche.)

Instructions:
“Cook” the fish in the lime juice. In a large stainless steel or glass bowl, combine the fish, lime juice and onion. The fish should float freely in the juice; if not, add a little more. Cover and refrigerate until the fish is as “done” as you like: An hour or so for medium-rare, 3 to 4 hours for “cooked” all the way through, which was my choice. Tip off the now fishy-tasting lime juice and discard.

Meanwhile, you can prepare the flavorings. Process the green chile and olives until finely chopped in a mini food processor (or finely chop by hand).  No longer than two hours before serving, combine the fish along with the tomato, cilantro, chili and olive mix and olive oil. Stir well, then season with salt and sugar and refrigerate until the last minute before serving. Serve with tortilla chips.