Lucky 13 Oysters brings together childhood friends with a love of the bay. 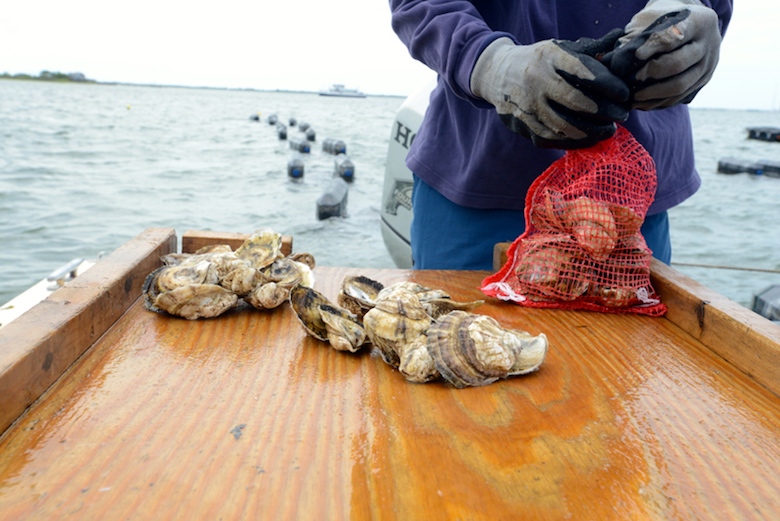 There was a considerable chop in the Great South Bay as Matt Welling drove his workboat out to the two-acre plot of floating black boxes that make up his and partner Max Haspel’s oyster farm. The work had to be done early because, as Welling predicted, a record 13-plus inches of rain would dump on Islip later that day.

The overcast sky felt eerie and the boat hit hard after each chop with a jarring slap.

“If it’s low tide, you have to be on your line because the bay gets pretty shallow around here,” Welling says. If there were anyone to travel with on a boat in this weather, it would be Welling. He is a professional yachtsman and was part of the Swiss team that won the 2007 America’s Cup. Shortly after arriving at the plot off Sexton Island, Haspel pulls up in his own boat, boards the work vessel, and the two men begin to work their floating farm.

According to suffolkcountyny.gov, over the past 25 years 93 percent of the shellfish have died off in the Great South Bay due to brown tides and algal blooms, killing 6,000 jobs as well. This also affects the bays on the East End.

To try and restore bay health, the town of Islip created an initiative to lease by lottery 13 parcels of bay area between two and five acres each for oyster farming. One oyster can filter 50 gallons of seawater a day, eating algae and removing dirt and nitrogen, according to the Chesapeake Bay Foundation’s website.

Haspel and Welling entered the lottery and were awarded the 13th plot, hence the name, Lucky 13 Oysters. “It’s only been a year and we are just figuring it out as we go along,” Welling says.

Welling is a sailor and Haspel owns a boutique finance firm. Both men grew up on Long Island as “bay rats,” but neither had ever farmed shellfish before. They asked oyster farmers in Maine, who had been at it for decades, what the best systems were for quality oysters and were surprised at the friendly and helpful responses. 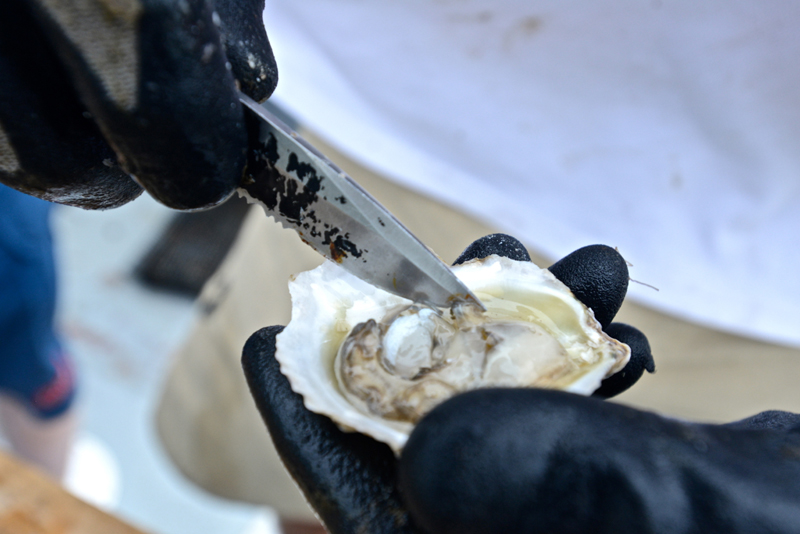 After doing their research they decided to go with the OysterGro system. Mesh bags filled with oysters are suspended from the floating black boxes. If bad weather comes, the plugs on the box can be pulled and the bags sink to the bottom out of harm’s way.

This method is more expensive than most, but Haspel says it comes with two benefits. The first is that the cages can be flipped over so the oysters can be periodically left in the sun. The sunlight and wind kill biofouling—barnacles, worms and other harmful microorganisms— keeping the oysters healthy. The second benefit occurs when the cages are flipped. The oysters tumble and rub against each other chipping the newer and frailer edges of the shell. The shell then grows thicker and with a deeper cup creating a plumper oyster with a very hard shell.

At this point you may be wondering, “What do Blue Point oysters grown in the Great South Bay have to do with the East End?” That’s a great question.

Haspel is the son of Southold’s rock star, biodynamic farmer KK Haspel. He grew up understanding the importance of sustainable farming, and although he and Welling are only in their second year, they have also won a Suffolk County lease for a 10-acre site off Jessup’s Neck in Peconic Bay, which they hope to have running sometime next year. The bays of the East End face the same brown tide afflictions as the Great South Bay. If oyster farming can clean up the water there, it can clean up the water here. And the oysters happen to be delicious.

Back on the workboat, Welling and Haspel are pulling up bags and dumping oysters from the size of a pinky nail to market size on a sorting table.

Welling shucks an oyster and slurps it down while Haspel explains what made Blue Points world famous. “They have a very minerally taste because of the proximity to the ocean,” he says. Welling pops another then nods his head in agreement.

“They’re salty and sweet, have a great briny taste, and the meat is sweet and plump,” he adds. “They taste like the water they come out of. These oysters taste different than the ones from Peconic Bay.”

A few local restaurants have featured Lucky 13 so far, and consistent distribution should be ready by spring. For samples and more information, Welling and Haspel can be reached by e-mail here.

WATCH a video of Capt. Dave Berson demonstrating his method of opening a oyster.