The Long Island Merlot Alliance has hired Robin Epperson-McCarthy as a research fellow to look into the scientific side of merlot. • Photograph by Randee Daddona 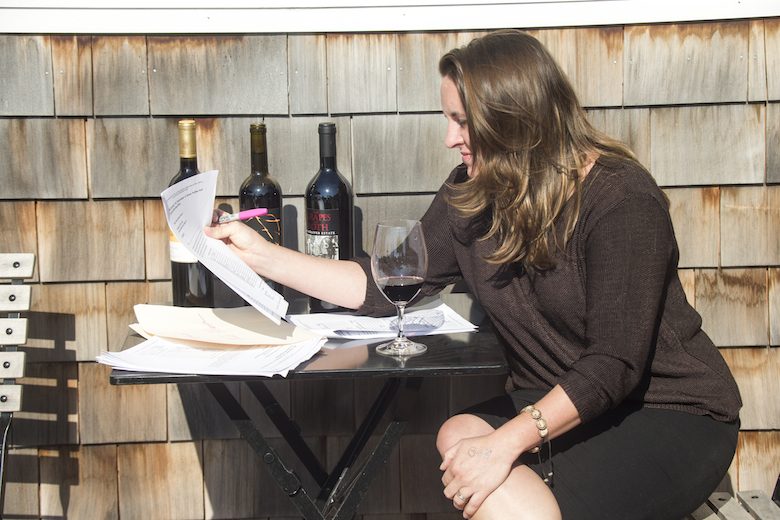 What is Long Island merlot? That, as it happens, is a question so complex it’s almost rhetorical.

But to understand any enigma, a little science can help. The Long Island Merlot Alliance (LIMA) believes passionately in its celebrity grape, and now, it’s doing the dispassionate data crunching to demonstrate why.

“We’re making world-class merlot here on Long Island,” says Robin Epperson-McCarthy, “but it’s so important to quantify and analyze the data in order for us to continue to advance as one of the top growing regions of merlot in the world.”

After a change in executive directors—from Donnell Brown to Deborah Brenner—Epperson-McCarthy was appointed as research fellow at LIMA, a trade organization of seven wineries that promotes merlot, merlot blends and the Long Island appellation in general. It makes its signature wine, Merliance, from merlot vinified at the member wineries and blended together; the sale of Merliance funds the organization.

She will work with members to conduct research that, broadly defined, will help the public and wine media, as well as wine producers and growers, understand more about how merlot performs on Long Island and what makes it unique. The Merlot Alliance’s central tenet is that merlot makes the finest wines in this region. Not every-one in the half-a-million-cases-a-year industry adheres to that philosophy, so LIMA’s goal includes promoting the region as a whole. As the world takes special notice of Long Island merlot, so it will pay more attention to all Long Island wines, LIMA asserts.

“Merlot has proven itself on Long Island,” says Epperson-McCarthy, “but we are always looking for ways to improve and be recognized as a top wine-growing region. Merlot gives us a standard for which future varieties and blends can be measured against.”

So, what exactly does that translate to, in terms of research?

“At the moment, we’re working on building a sensory profile of Long Island merlot,” she says. “By doing blind tastings of merlot wines from around the world, we’re homing in on what makes Long Island merlot distinctive based on its unique qualities.”

The past decades have already yielded much information about Long Island merlot. As a red that ripens earlier than, say, cabernet sauvignon, and regularly produces healthy fruit and decent yields, merlot generally performs well. The East End climate is relatively mild, with moderate sunshine, so merlot is in little danger of over-ripening. Long Island merlots tend to be medium-bodied, and while, stylistically, they are often fruit-forward, they are still more restrained than hot-climate merlots. When merlot first emerged as a regional forerunner in the ’90s, merlot-based wines from Bordeaux were frequently cited comparisons. The industry has distanced itself from that, preferring to promote its distinct regional identity, so it’s fair to say that climate constraints dictate that Long Island merlot follows the cooler-climate model, but on its own terms.

As to what precisely about its flavor profile, effect of terroir and so forth makes Long Island merlot special, as many people believe it is, it will be interesting if LIMA’s comparison tastings yield some specific language on that. As a marketing device, it would help fine-tune the merlot message and guide critics and reviewers toward their conclusions. However, due to stylistic variations even just within the Long Island wine industry, consensus may be elusive.

In other words, “What is Long Island merlot?” is a question that science can help LIMA to answer, but personal taste, opinion and the overarching goal of promotion will necessarily play a part. Wine is, ultimately, a very subjective experience, as anyone who has ever poured in a tasting room knows. This is part of the process, Epperson-McCarthy says.

“People want the story,” she says.” They want to understand the region and how it is similar to other popular grape-growing regions, as well as what is unique to this time and place. They want to learn about the winemakers, about the history of Long Island wine, and they want to have fun at the same time.”

Another way LIMA hopes to be of use is by compiling historical data from the past 20 years so that growers can better recognize trends influencing the growing conditions in the vineyards.

“Not only is LIMA an opportunity to work with each other, but it’s designed to create a network of knowledgeable and experienced industry professionals who can assist each other in all facets of the business,” Epperson-McCarthy says, “from viticulture to production, marketing and sales.”

As a wine consultant and certified sommelier, Epperson-McCarthy’s experience ranges from the press pad to the pouring station. She first joined the wine industry when, with a BS in biology and chemistry in hand, she joined Premium Wine Group in Mattituck as lab director. She has also worked many harvests in New Zealand, Australia and California. “I always pack Long Island merlot when I go overseas,” she says. She went on to Shinn Vineyards, became assistant winemaker at Martha Clara and is currently senior sommelier and director of education at Roanoke Vineyards in Riverhead.

As for personal philosophy, she’s a bit of a “calculated rebel,” she says, and has plans to make her own wine.

“Drink what you like, make what you drink,” she says. “Do it with zeal, and others will join you.”

READ about a 2005 blind tasting of Long Island merlot from one of our earliest issues. See who came out ahead.