An Aussie pulls from his roots yet blooms on Long Island soil. • Photographs by Randee Daddona 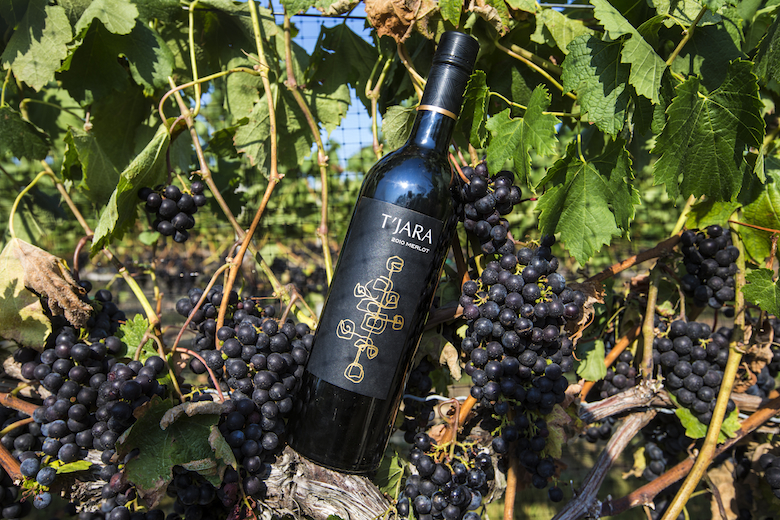 “Cab franc is a grower’s variety,” says winemaker Russell Hearn. “It’s very fiddly in the vineyard; you really have to be on top of it. Too hot, or too heavy a crop load, and it just tanks. It becomes this weedy, orange thing.”

It’s a clear, warm evening on a deck overlooking Long Island Sound. Fishing boats bob just offshore, and a band of resident cormorants sun themselves on the rocks. We’re chilling with some prosecco, Manchego cheese and crusty bread, chatting about wine and gearing up for some serious reds. Hearn pours the T’Jara 2010 Cabernet Franc. It’s an estate-grown wine from the 20-acre Mattituck vineyard he and his wife, Sue, own with business partners/longtime friends Jed and Lori Beitler. 2010 was a fantastic year for Long Island reds, and this wine is showing well. The color is reddish purple, clear-edged, as one would expect from a wine just two years in the bottle. We taste; it’s true to cab franc character: soft, plump and medium-bodied with bright raspberry fruit up front and approachable tannins. 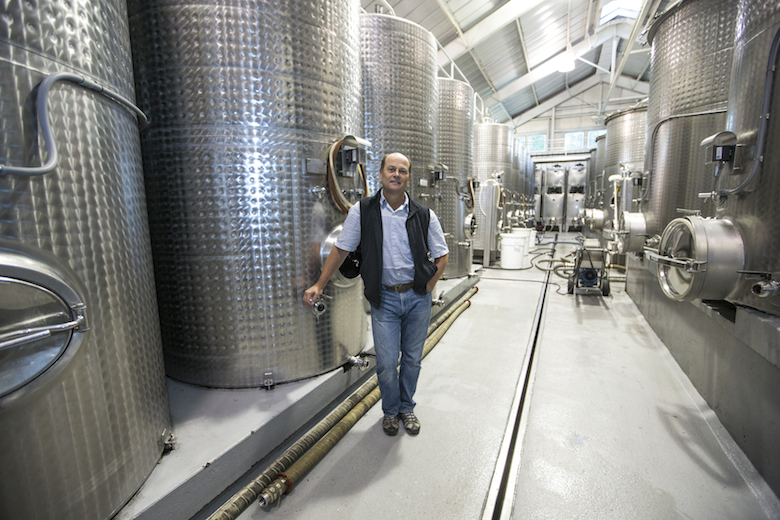 The T’Jara wines are a project born of passion and are not someone’s day job. Only the best fruit is used; the rest is sold. Reserves are made only in exceptional years. The idea since the first vintage in 2007 is to make wines that the Hearns and Beitlers like to drink and that are also the best wines they can possibly make. “I think we’ve entered the top tier of Long Island wines with the 2010s,” Hearn says.

When crafting T’Jara wines, Hearn likes to taste, blend, play around with the percentages and taste some more. Pure varietals are, in his opinion, a device of early marketing, when American mass-produced wine was still before its time. Hyping 100 percent varietals effectively set California wines apart from European wines, “but it’s not the best approach for everyone,” Hearn says, tactfully.

The 2010 Cabernet Franc contains 16 percent merlot, 6 percent malbec and 2 percent cab sauvignon. All the grapes are his, except the malbec, which comes from Anderson Vineyard in Southold. “I like to add something that can have a major impact in small percentages,” he says. The finish is slightly longer than one would expect, and that’s due to the blend, he adds. “On its own, cab franc has very little finish, so the blending balances that.” 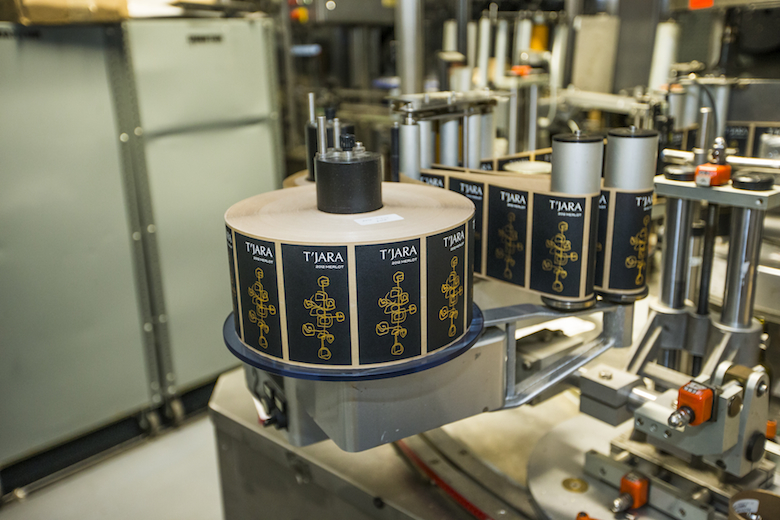 We open the 2010 T’Jara Merlot, which, for those who like to know these things, is from plantings of clones 1, 81 and 3. This merlot includes 4 percent cab sauvignon, 2 percent malbec and 2 percent cab franc. It’s full, lush with hints of tobacco-y barrel flavors, yet still fruit-forward—in Hearn’s preferred style—with dark fruit, blueberry, plum and the beginnings of flavors from bottle aging. It has the acidity and structure to make it a great food wine. Conversely, the addition of cab franc lifts the aromas, Hearn says. “I’m very happy with the way this is turning out.”

In this region, merlot performs well. “50 years from now, merlot will still be number one on Long Island,” Hearn says. Next to merlot, cab franc is considered to have the most potential for greatness. But, as Hearn says, it’s not easy to grow. Like sangiovese, pinot noir and other reds with an ancient and venerable lineage, it requires much care and attention. This is why you don’t see a whole lot of cab franc out there on wine-shop shelves.

“It’s a rarity,” he says. “You can’t bastardize it, or mass market it. You will never see a Yellow Tail cab franc.”

Hearn is Australian, so the infamous yellow-footed rock wallaby (no, it’s not a kangaroo) comes bounding into conversation with some regularity. The evolution, since about 2000, of Australia’s largest-by-volume wine is interesting, though. The hugely successful, branded and marketed beast thundered onto the American winescape and spawned a population explosion of easy-drinking “critter labels.” Size-wise, at 1,000 cases per year compared to Yellow Tail’s 12 million, T’Jara is a mere flea on the wallaby’s tail. 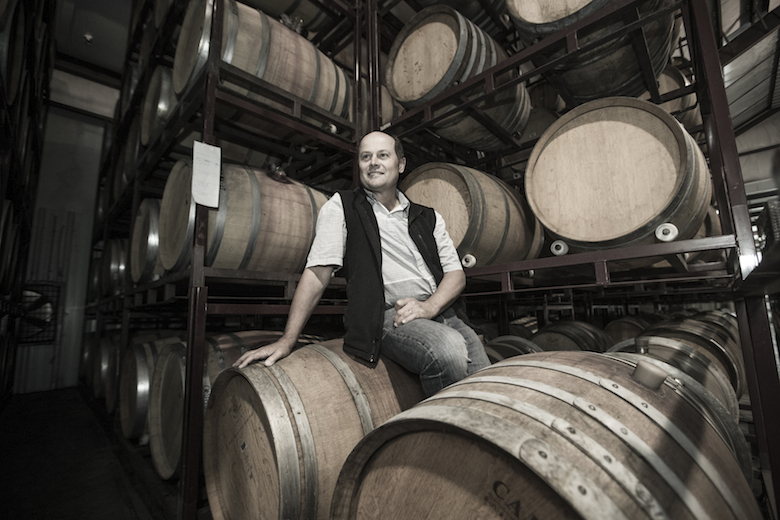 “We’ll eventually max out at about 3,000 cases,” says Hearn. “We’re not in a rush to get there.” In quality, though, T’Jara clearly whomps Yellow Tail hands down, so with good-natured Aussie aplomb, Hearn acknowledges the wallaby and sends it off to the mass-market outback where it belongs.

As for T’Jara, it’s an aboriginal word meaning “where I am from” (kind of the same concept as “terroir”), and the label and capsule have striking, squig- gly, abstract art by Dinamomilano Bruno Stucchi, an Italian design shop Hearn knows through friends. The wine also has a screw cap. “A Russell Hearn wine will never have a cork,” he says, laughing.

Australia pioneered the use of screw caps, developed by a French company, back in the 1960s, and in fact many Aussie wines used them though the ’70s. But once those wines reached Great Britain’s shores, the traditionalists wanted nothing to do with this new-fangled, presumed inferior device. Cork was the only respectable closure for a wine, as everyone knew perfectly well except, apparently, that wild bunch of upstarts in the Antipodes. So the Aussies stopped using them. Hearn remembers when he worked at Houghton wines in Australia in the ’80s, the screw cap machine sat dusty and unused. Screw caps were reintroduced in the ’90s, and now the majority of Australian and New Zealand wines use them. The screw caps come in two types: one has a disc-shaped insert made of white plastic that “breathes,” while another, made of tin, does not. So the white cap is used for reds that should be aged in the bottle, and the tin for whites and roses that should stay fresh.

Hearn recalls a wine conference in 2000, when Penfolds poured two wines and asked everyone to guess how old they were. The first wine was a little orange, going past its peak; the second was still bright and seemed much younger. Turns out they were both from 1968; the first wine was in cork and the second in a screw cap. It was a compelling demonstration, Hearn says.

We’ll have to taste these T’Jara wines again 30 years from now to see if the screw caps keep these pampered Mattituck grapes in good shape.

FIND OUT MORE Learn about the evolution of wine under screw caps on Long Island.