How fast can you open a dozen oysters? The winner at Greenport’s maritime festival did it in … 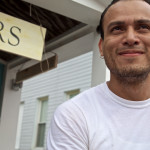 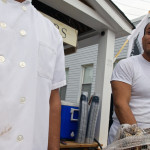 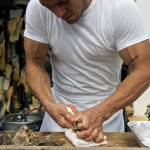 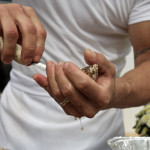 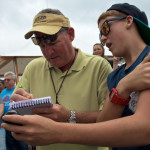 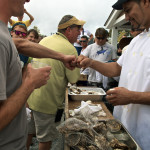 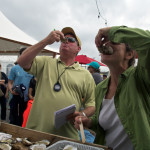 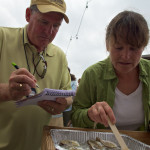 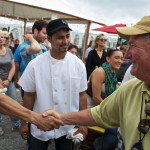 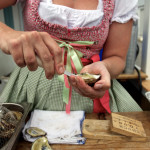 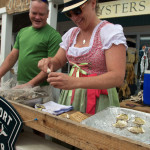 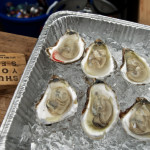 Competitive shucking, like any contest, is not without it's dangers. Shuckers in all categories can suffer nicks and cuts. 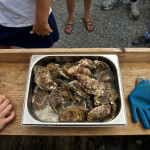 After a heat to determine the fastest Shucker.

All photos by David Korchin

Though this year was the 25th anniversary of the Maritime Festival in Greenport Village, it was the first to include an event that many hope will become an annual tradition.

As local vendors set-up their booths in the late summer sun that Saturday morning, a crowd was gathering outside the old bait and tackle shop through Bootleg Alley where the Old Creek Oyster Market recently set up shop, teaching tourists and locals how to shuck the bivalved mollusks. The first annual Shuck-Off contest took place in front of the market that morning, something co-owner Ian Wile had been looking forward to after his first summer spent instructing oyster-opening beside his son, Jackson.

The contest was separated into professional and amateur divisions with pros competing to open a dozen oysters while amateurs raced to open six. All contestants received commercial-grade shucking knives from R. Murphy Knives, which sponsored the event; winners received a premium package from the knife company.

The winner of the professional division was Alan Martinez of Claudio’s Clam Bar with a winning time of 1:11, though penalties bumped it up to 1:27, followed (in order) by Bill Blanchard of Peconic Bay Prime Oysters, Tony Avila of Claudio’s Clam Bar and Matt Ketcham of Peconic Gold Oysters. Martinez is currently ranked number three in the nation for speedy oyster shucking. The winner among the amateur entrants was John Hopkins of Connecticut with a respectable 1:32.

According to co-owner Rosalie Rung, amateur participants included “customers who have honed their skills over the summer, such as Shawna Macnamara, who gained some extra points for ‘flare’ by arriving dressed in a German dirndl outfit, and Lexi, who had never shucked an oyster until about two months ago.” Ms. Rung said she and her family were “thrilled” by the opportunity to host the event in sync with the maritime festival celebration. “We had a great turnout with many people arriving specifically for the contest,” she said.