My kids, Miranda and Toby, love these crayons. They’re big and chunky, come in bright colors, are shaped like lizards and alligators and smell like honey. 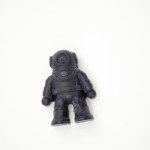 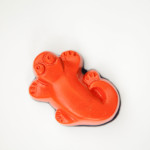 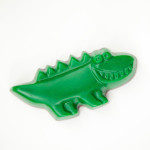 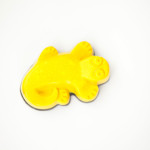 My kids, Miranda and Toby, love these crayons. They’re big and chunky, come in bright colors, are shaped like lizards and alligators and smell like honey. We’re on a play date with Laura Klahre, a friend of ours who is a beekeeper and now, through new programs she has developed, she is an environmental educator as well. Actually, Klahre tells the kids, the bees really make the crayons, as they are fashioned from beeswax gathered from more than 100 hives that she tends on the North Fork for her artisanal wildflower honey company, Blossom Meadow.

“These crayons are made by little female bees,” she tells the kids. “Only female honeybees make beeswax; the males have other important jobs.”

She shows them some live bees buzzing around honeycombs in a small, enclosed demonstration hive and the netted hat and other equipment she uses to tend the real hives at the farms and orchards. The kids are fascinated; they bombard Klahre with questions and start using the cute, two-toned crayons to draw bees and hives. The crayons, it turns out, are a great way to engage even the littlest kids in learning about how important bees are in nature, and why they should be appreciated. Klahre is thrilled.

The main point she wants to make to kids, says Klahre, is that pollinators are responsible for the continued regeneration of our forests and meadows and essential for the crops that end up as food on our plates each day. Yet bee populations have declined drastically due to environmental factors including disease, pollution, pesticide use and loss of habitat. Some of this stuff is a little over the kids’ heads, and Klahre doesn’t dwell on the negatives, but it’s interesting to see just how much they take in. More than you would expect. And of course all kids are excited just to see the real, live bees.

Klahre remembers being a bee-obsessed kid. She used to take her mother’s sewing thread, tie a leash to a bumblebee and watch it for hours. She has always known that she wanted to work in conservation, and after getting her bachelor’s and master’s degrees in marine sciences, she worked as an oceanographer, then for the state Department of Environmental Conservation, then the Peconic Estuary Program and the Nature Conservancy here on Long Island before starting Blossom Meadow. Last year’s honey production was small, but her number of hives is growing. And because people are now calling her to remove bees that try to nest in the eaves of their houses, she is rescuing these nuisance hives and relocating them.

The crayons weren’t originally part of Klahre’s plans, though. The idea came in a dream, she says. It took about a year to source the nontoxic pigments she wanted, find the right molds to make animal shapes easy for little hands to grasp and fine-tune the blend of ingredients.

“The bees are my heart and my source of inspiration,” she says.

Blossom Meadow crayons, other bee products and milkweed seeds can be found at Klahre’s website at blossommeadow.com and at the Blossom Meadow and Coffee Pot Cellars tasting room on the Main Road in Cutchogue.