As the wife of a clammer, I am perpetually on the lookout for clam recipes. I have perfected several over the years: Long Island clam chowder, white clam sauce and baked clams, in particular. • Photograph by Doug Young 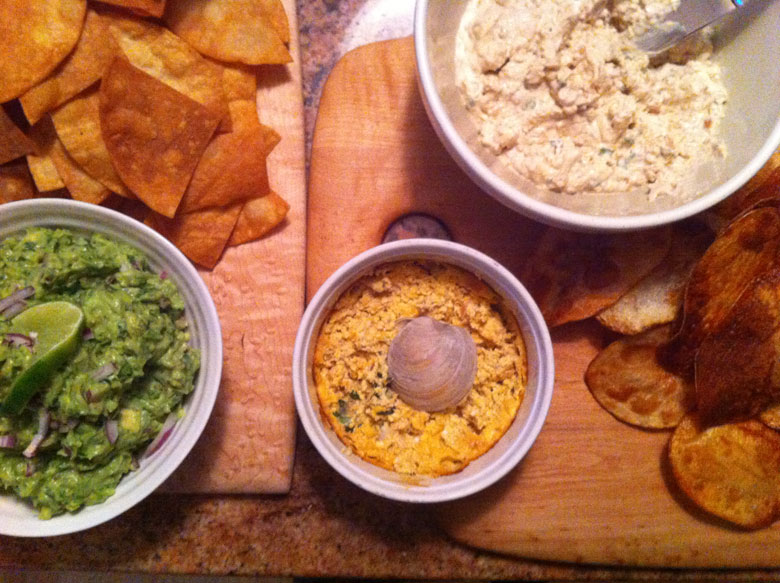 Last February, as Super Bowl VLXII approached, I came home one day and discovered the clammer himself in the kitchen, working on a bit of recipe testing. The year before that (Super Bowl VLXI), his Buffalo Baked Clams scored a huge victory with our group of friends. Could he possibly top that? Yes, and he scored big time with his Buffalo Clam Dip, which will be making a repeat appearance at our Super Bowl VLXIII huddle.

Directions
Preheat oven to 350 degrees.
Scrub clams and place in large pot with about 10 oz of beer (reserve 2 tablespoons of beer for later). On medium heat, cover the pot and steam open the clams. This will take about 15 minutes. Do not over-cook the clams, as they will toughen. Once clams have steamed open, remove them from their shells (excluding the tough connector muscle) and discard shells. Coarsely chops the clams, along with about 1/3 cup of the clam liquor (save the remaining clam liquor to use in seafood soups, stews & chowders).
In large bowl, combine cream cheese, chopped onions, lemon juice, hot sauce, Worcestershire & 2 tablespoons of Port Jeff’s Tripel H beer. Fold in chopped clams. Pour into shallow baking dish and bake until brown and bubbly, approximately 20 minutes.
Serve with crackers, bagel chips or whatever. Enjoy!

To make some Latin-inspired Super Bowl treats check out what Natalia de Cuba Romero’s got on her stove.