A German Holiday Stollen by Way of Long Island 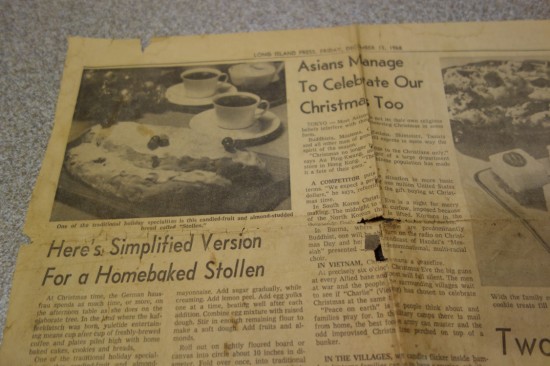 We always thought the homemade stollen Aunt Greta brought each Christmas was a recipe from the old country. That was until I convinced my mom’s German aunt to teach me how to bake the rich holiday yeast bread, bejeweled with candied fruit and nuts. It was then she handed me a clipping from the food page of the Long Island Press, dated Friday, December 13, 1968. It contained a recipe for Old Time Stollen, which we used to guide the baking lesson.

At Christmas time, the German hausfrau spends as much time, or more, on the afternoon table as she does on the elaborate tree. In the land where the kaffeeklatsch was born, yuletide entertainment means cup after cup of freshly brewed coffee, and plates piled high with home baked cakes, cookies and breads. One of the traditional holiday specialties is this candied-fruit and almond-studded bread called Stollen. It is as much a part of the festive kaffeeklatsch as the coffee itself.

I suspect that like most of us who live vicariously by clipping recipes, our immigrant Aunt Greta saw something in the Old Time Stollen recipe that transported her back to the yuletide traditions of her childhood, and she wanted to share a taste of those memories with family members on Long Island. When she eventually stopped baking, I took on the tradition, and she vigorously approved in her stern German accent. Now, each year just before Christmas, I prepare two loaves of Aunt Greta’s stolen—one for my mom, and one for our family’s Christmas Day celebration. I can still picture Aunt Greta unwrapping the colorful, yeasty loaf, and instructing us to enjoy it with “just a dab of sweet butter.” 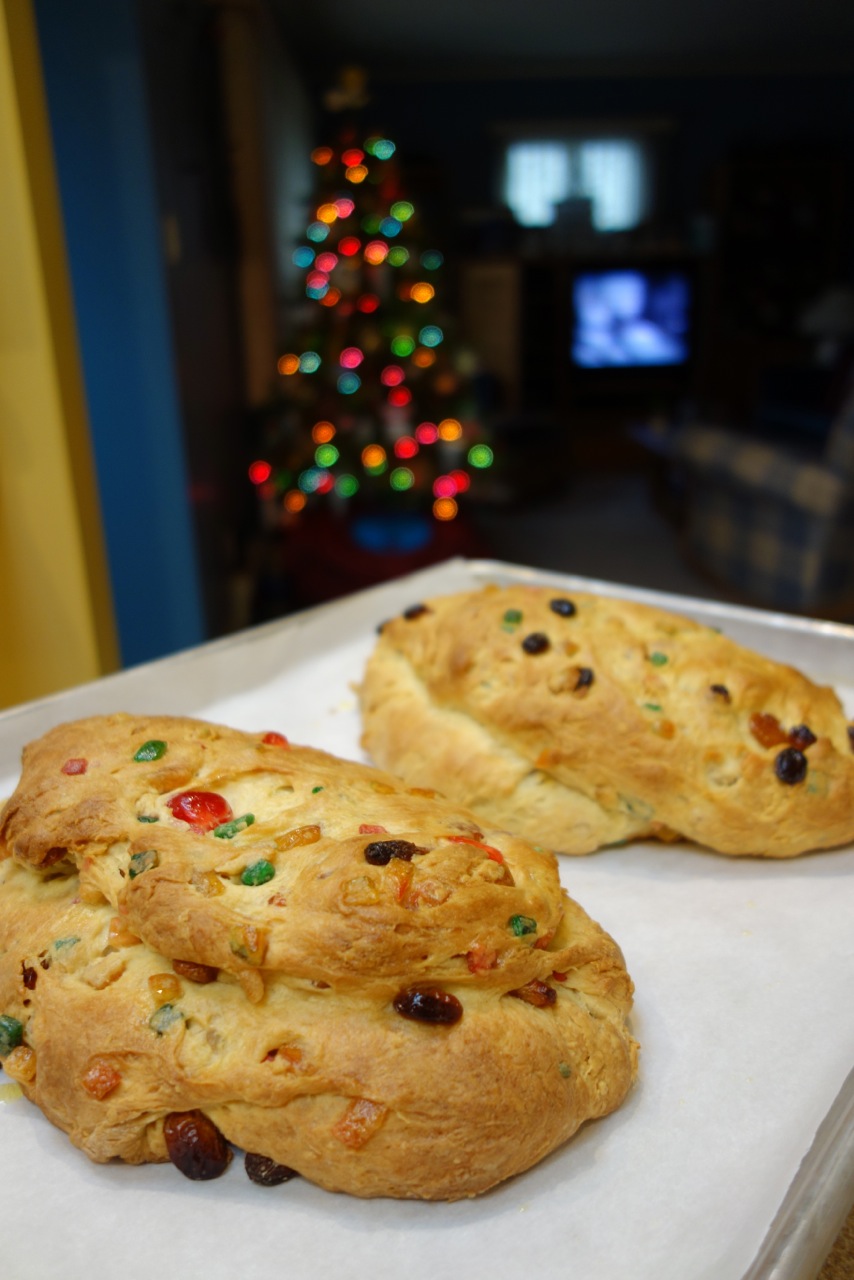 Scald milk; cool to lukewarm. Dissolve yeast in warm water. Add to lukewarm milk.  Sift 1 ½ cups flour with salt; stir in. Cover. Let rise in warm place until doubled. Cream butter to consistency of mayonnaise. Add sugar gradually, while creaming;  add lemon/orange peel.  Add egg yolks one at a time, beating well after each addition. Combine egg mixture with raised dough. Stir in enough remaining flour to make a soft dough. Add fruits and almonds. Roll out on a lightly floured board or canvas into a circle about 10 inches in diameter. Fold over once into traditional pocketbook shape. Place on greased baking sheet. Cover and let rise until doubled. Bake at 350F until golden brown 35-40 minutes. Brush with melted butter. Cool on rack. Before serving, sprinkle with confectioners sugar.