Processing birds leads us back to history and takes us to the future. 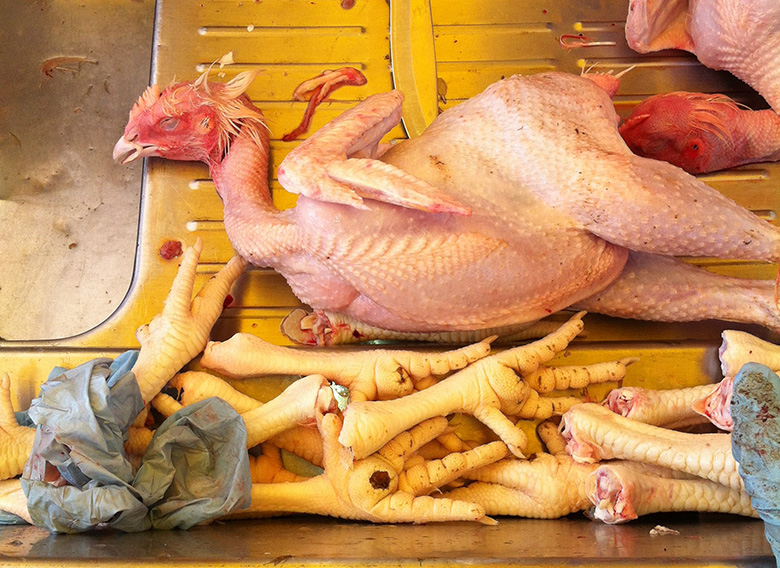 My initial encounter with the birds had come several weeks earlier, while they were still chicks. The farm I work for, Amber Waves, had been considering constructing mobile chicken tractors so we could get our birds out on pasture and let them fertilize the soil. This would also allow them to scratch through the dirt and find insects and other organic matter to eat, thus improving the taste of their eggs and cutting down on feed costs. In order to get ideas, we drove to the property on Town Lane in Amagansett that we share with several other local farmers.

After making our way through the fallow fields recently acquired through the Peconic Land Trust, we came upon several mobile chicken units belonging to Sunset Beach Farm that were designed to hold anywhere from 20 to 50 birds apiece. I was instantly drawn to the housing that contained the young “broilers,” which I knew were going to be processed in the coming weeks.

Broilers differ from laying hens because breeders enhance the characteristics consumers desire when purchasing chicken, such as broad breasts and large thighs. As chicks, they can be mangy looking, though—many were missing a good deal of their feathers, and yet, they were somehow still quite endearing. Perhaps it was their youth, or their naïveté. A colleague at Sunset Beach Farm, who routinely cares for the birds, noted that they were “not the smartest chickens they’d come across.” Indeed, several of them died prematurely due to the cold spring nights, unable to figure out how to get inside the open coop door. Others fell victim to foxes, raccoons, illness and even suffocation by their cohorts. All said and done, 50 were whittled down to 33 as natural selection followed its course.

The trajectory of agriculture on Long Island has run largely parallel to the rest of the East Coast’s for the past few centuries; after many decades of incredibly complex crop rotations and cornucopious harvests, many Long Island farms have become beholden to conventional potato and corn farming. Examples of the kind of destruction such irreverence for natural cycles can have on the ecosystem include soil thoroughly depleted of nutrients and compromised pest resistance. In fact, decades of monoculture allowed the Colorado potato beetle to thrive so completely that eastern Long Island remains the only place in the country where the bugs have developed the capacity for flight, rendering them especially capable of obliterating any crop in the nightshade family, especially potatoes.

Fortunately there has been a resurgence of smaller, more diversified farms that seek to establish the food independence of the East End. The owners of Amber Waves Farm are especially keen on this concept and are investigating the viability of growing various types of wheat that can be milled into flour, thus tremendously expanding the possibilities for entirely local food. This year our farm is also growing several varieties of corn for polenta, as well as expanding into dry beans. The desire to restore the entirety of the East End foodshed and diminish our need to outsource production is both a noble ambition and a serious undertaking.

Inherent in this desire for food security—achieved in part through food independence—is raising animals for consumption. The acquisition of a trial run of meat birds by Sunset Beach Farm exemplifies this aspiration. Polyculture was making a comeback, and I wanted to experience it firsthand.

My fellow apprentice, Emma, and I arrived at John Wagner and Karin Bellemare’s Sunset Beach Farm in North Haven on a Monday afternoon. The date and time of the slaughter had been postponed several times, mostly because the birds were considered to be on the small side, still in need of more fattening. When we got there we were informed that the scalder, which must be kept at 140 degrees Fahrenheit, was hovering around 130 degrees and that we’d once again be waiting.

There was a palpable nervousness among the young farmers, most of whom had never harvested anything but vegetables. We discussed the steps involved in the process: pulling the chickens from the back of John’s truck, inserting them into the aluminum kill cones, slitting their throats and draining the blood. Then comes scalding, plucking, eviscerating, cooling, weighing and bagging. We took last looks through the instructional books on hand and watched YouTube videos as we tried to mentally prepare. Yet no matter how many cognitive-justification exercises and visualizations you run through, there is an inevitable inability to prepare for the moment until it finally does come.

After what felt like an eternity, the thermometer in the scalder eventually reached the proper temperature and it was “go time.” I was tasked with grabbing the birds from the car and putting them into the kill cones. I probably would have preferred a post-mortem job but scalding and plucking were extremely fast, and I was the least versed in evisceration. So I grabbed my first bird, put it into the cone and watched as John completed the maiden incisions.

The warmth of the birds took me aback as I carried them from the car to the tent. As someone who has cared for laying hens, I have picked up many chickens in the past, but I never experienced such radiant, visceral warmth. People hold living creatures in their hands all the time—be it a pet or a loved one—but the realization of impending death especially attunes one to the presence of life.

Whether by luck or by design, it took awhile for the birds in the back of the cab to realize the danger they were in. The first 15 or so were easy to get a hold of and barely cawed until held upside-down, which supposedly disorients the birds, although if anything it disoriented me as holding them by the legs allowed their wings to flourish.

I admit I was dismayed by how easily my nervousness dissipated once we got past the first few birds. As the initial shock subsided, the process became routine; before long grimaces turned to grins as we became more complacent with our roles in the food system.

With the back of John’s van empty and the cooler full, I left the blood-soaked tent and returned to the serenity of the backwoods of the farm. As my mind drifted back to the world outside of the tent, all I could hear was the soft chirping of songbirds. I envisioned what the East End foodshed must have looked like before the modern agriculture, before man had conceived such systematic ways of acquiring animal protein. I pictured the Shinnecock and Montaukett Indians pursuing waterfowl and turkey and the early Bonackers hunting and trapping small game and deer. As my thoughts wandered, my senses brought me back to the present. I could smell the coals under the grill smoldering, and I knew I was about to enjoy a truly special feast.