Why Are There Seven Days in a Week?

How a scallop delivery answered an age-old question. 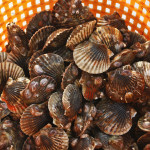 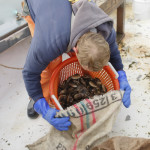 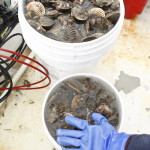 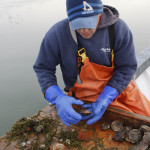 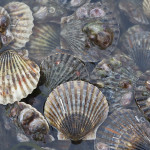 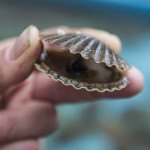 The shell upon which Botticelli’s Venus perches, alas, is not the oyster, that pearl of the table. No, it’s the scallop, the most symmetrical and fascinating of the family of bivalve. She is the prom queen, the movie star, the vamp, the hot chick of shellfish. She’s the Miss America of the sea floor, with her batting blue eyes—thousands of them—and the swoosh of her shells, like the flirt of a woman’s fan, allow her to scoot out of your grasp.

That her harvest would explain one of the mysteries of the universe, would pick at the lock of time itself, is proof of Keats’s axiom that beauty is truth.

Peconic Baymen crack open the dawn in open skiffs and drag their hand-forged steel dredges across the bay, arresting the little girls by the bushel. No mechanical advantage allowed. Forget about electricity. Only a man’s muscled arms are legal. Steel and bicep. And a hemp basket stitched into the steel frame. Hemp is the preferred rope, because it’s better and softer and older. Old-school rope—when men were a different species than they are today.

Oysters can refrigerate for a week or two. Scallops, on the other hand, only last for a day. Both sets of animals are almost two years old when marketed. If not harvested by May, every scallop will die of old age just before its second birthday, a very interesting and beautiful creature. I try to get the one-year scallop bugs I find in my oyster cages to thrive in the creek, but they rarely do. They prefer to be nestled in beds of seaweed; eelgrass drives them wild, and they will procreate copiously if they find such a spot. Sadly, very little eelgrass thrives in the Peconic Bay anymore.

Anyway, the live, wild scallops were a rare, local treat last year in the bistros of New York. Each week Greenport bayman Joe Angevine brings me more. He’s happy to do it. I pay him a premium, and he doesn’t have to shuck them, which is what happens as soon as the burlap sacks of scallops are placed (no bayman throws them) on the culling room floor.

Angevine first arrived on a Monday at noon. The following Monday at noon, after watching him dock for the second time, I had an epiphany and decided I must write Witold.

Witold Rybczynski is a professor of architecture at the University of Pennsylvania and author of many popular books about houses, urban and suburban life and life in general. Twenty years ago he wrote Waiting for the Weekend. I was not an oyster farmer then, rather working in the corporate world; the book leapt into my hands, and I was out the door, reading as I walked along Union Square.

Obviously, the book is about the weekend, but Rybczynski first had to deal with the concept of a week before zooming in on that delicious icing on the cake, so to speak. I enjoyed the book and often bought more of Rybczynski’s titles because they were such engaging reads. However, his discourse about why we have seven days in a week, I found a little unfulfilling.

Rybczynski argues that the reason we have seven days in a week is that there are seven heavenly bodies—excluding the stars and comets—visible to the naked eye. And indeed, in Latin, the days of the week are named for them. But suppose that seven days existed in and of themselves, and the heavenly bodies were simply chosen to differentiate them. For seven surely preceded the weekend. God made the world in seven. The Vikings substituted some of their gods, but kept seven. It’s a lucky number; everyone knows that. I think an astounding number of people in the world believe seven is their own lucky number. What’s the big deal about seven? Why choose that number to segment the longer unit of time, the month?

Rybczynski notes the Egyptians, a riverine culture, had three 10-day weeks in their month. Suppose the Romans, a coastal empire that sailed goods all over the seas, decided on seven days and then had to pull some names out of the clear blue sky.

I e-mailed Rybczynski; like most, he has a website with a “contact me”, and he’s peering out through his node, his IP address, his mailbox, all day for something intriguing to float by, something carried in by the tide.

His reply came instantly and showed what fascinating creatures we humans are, what noble works, what masters, however inept, of our domain.

Rybczynski wrote, and I am quoting verbatim and en toto, “So interesting about the tides—I had no idea. BTW, how do I go about ordering oysters?”

From my e-mail address, he could tell I was in the oyster business, and his glands secreted the message that he may get a nice treat out of this correspondence. Indeed, we quickly hammered out a fair trade: two books for three-dozen oysters. Obviously, he was slightly ahead, but he was the world famous professor and writer, and I was just a humble oyster poor boy. I threw in a French oyster knife to make his experience complete.

My mind-numbing revelation quickly slipped through his facile brain. This insight into civilization, trade, human thinking, time itself was shelved for the next meal.

For days before writing Rybczynski, I marveled at this eureka into human evolution, the awakening of the mind, the ordering of the flow of the universe.

And it was all because Joe Angevine wanted my premium for his scallops and did not want to shuck them as he had done his entire 60 years of existence on the East End.

Angevine’s boat is bigger than mine, and the entrance to Widow’s Hole is relatively shallow. So the first Monday, arriving at exactly noon and exactly low tide, he had to tilt his big 225-horse Mercury and putt in slowly, lest his propeller strike the cobbles and sand at the shallow bar of the creek. The next Monday, exactly at noon, I was waiting on my dock for Angevine’s arrival. He called ahead to ask about the entrance. I glanced at the bay cresting the breakwater, waves and backwash colliding into each other like they only do at high tide.

Seven days, I suddenly realized, is the amount of time between high and low tide.

I had to count out Angevine’s scallops into lots of 100 and pay him. Distracted by my unproven thesis, I twice lost count and, embarrassed, had to start over in front of Angevine and his mate. Once the scallops were stowed, I quickly returned inside and searched my desk for the ever-present tide chart. Every bayman has a half dozen of them: tacked by the door, crammed in a corner of his boat cabin—his Rhode Island outhouse—or on his desk, if he has a desk. Picking any day and traversing to the seventh day past it, I could see my theory proven: seven days, to the hour, is the time between high tide and low tide on any spot on the planet. Almost clockwork.

There is indeed something heavenly about the number seven.

It divides the new moon from the half and the half from the full. It is a full exhale of the Earth, a karmic ohm to the moon, a cosmic pulse that touches us, while bathing the Earth, in our quest to the next weekend, the next rest from whatever our toils have been. It’s the span between installments of the Sunday New York Times for god’s sake!

Most days I awake before sunrise. Like any bayman, when I look at the water, I instantly note the tide. Angevine is out there in the Peconic somewhere, scraping the bottom of the Peconic for scallops. Rybczynski is awake on his node. We exchange greetings about the smallness of the world and point each other to interesting things to read. I sense he’s moved on about why there are seven days in a week, but I’ll send him some oysters, scallops and Champagne for Christmas.

For seven surely preceded the weekend. God made the world in seven. The Vikings substituted some of their gods, but kept seven. It’s a lucky number; everyone knows that.

She is the prom queen, the movie star, the vamp, the hot chick of shellfish. She’s the Miss America of the sea floor, with her batting blue eyes.