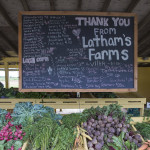 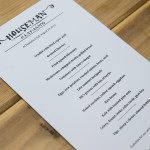 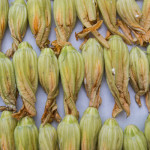 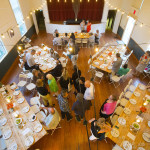 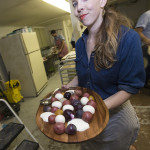 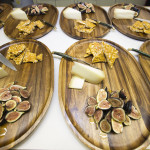 This summer Ned Baldwin initiated a food frenzy on the North Fork. In early June, the Seattle-born chef launched a pop-up restaurant in the tiny hamlet of Orient, where he’s spent the last nine years cooking at home for family and friends. Houseman at Latham’s was originally conceived as a series of fortnightly dinners to be held at Latham’s, a nearby farm, but local politics got in the way. The event moved to Poquatuck Hall, which has a working galley, electricity and adequate dining space. Around the block is Baldwin’s tricked-out home kitchen, complete with a Traulson fridge and six-burner Viking range, which served as Houseman’s unofficial HQ.

Baldwin discovered the pleasures of traditional, everyday food called husmannskost or “house owners fare,” while traveling through Norway. Ten years later, over Pappy Van Winkle bourbon and a Sunday roast, Baldwin and architect Louis Yoh, hatched the idea for a series of communal meals named for the concept and inspired by Scandy food. The notion of community is not new to the restaurant world nor to the North Fork, and like church suppers of yore, potluck dinners in Orient have become central to the social scene. “It’s been hard to impress people in the community who know good food,” says Yoh, while contemplating the concept of a prix-fixe dinner. Yoh designed the five wide-planked tables that accommodated the 70-plus guests who paid $95 each and were encouraged to bring their own beverage, be it liquor or wine.

Cooking wasn’t always in Baldwin’s blood. He did a 180 while enrolled in the MFA program at Yale after eating at Lampreia, a now defunct restaurant in Seattle. “I was surrounded by people who were shelling out real money for work that chef Scott Carsberg made that day,” he says. “They weren’t hanging it on the wall. They were putting it in their bodies.” The immediate satisfaction one could derive from cooking versus generating art stuck with Baldwin. So he began a journey from sculpture to learning his way around restaurant kitchens like Craft before landing a job as line-cook at Prune. Baldwin’s mentor and former boss, Gabrielle Hamilton, is known for her gritty and unpretentious style. “No foam and no ‘conceptual’ or ‘intellectual’ food,” the chef has been quoted as saying. After spending five years at her stove, most recently as chef de cuisine, Baldwin has clearly followed in Hamilton’s footsteps.

The Houseman menus incorporated a cornucopia of local ingredients, including duck from Crescent Farm and fresh seaweed foraged from Oyster Ponds. Each of the six dinners featured a central ingredient: lamb, duck, shellfish, pork, fish or vegetables. Although spring had morphed into summer, the inaugural meal was lamb featuring skewered tongue and heart. July’s lineup highlighted duck served five ways: liver mousse, prosciutto, hearts, legs and smoked breasts. “It was a good challenge to take an ingredient that’s associated with colder months and prepare it in a way that makes sense in summer,” says Baldwin. A shellfish dinner of mussels, oysters, lobsters, shrimp and clams was followed by pork in early August. Headcheese terrine drizzled with sauce gribiche—an herbaceous mix of marjoram, mint, parsley and jungle tarragon from Bay View Farm Market in Aquebogue—was trailed by a hefty pork shoulder roast for diners to carve by their side. Next up, fish in many guises; the final meal was a send-up to the veg.

“I cook food that makes sense to eat in the place you’re eating it,” says the jovial chef, adding, “sometimes the act of cooking seasonally accurate food in the city feels academic.” The multi-course vegetable menu included fresh crudité, fried squash blossoms and a baked gratin of zucchini, yellow squash, eggplant—with dahlias for the table—all picked that day. The Farm in Southold was a constant, and for the final dinner it supplied heirloom tomatoes like Cherokee purple, Aunt Ruby German green, striped Germans, Brandywine, Black Krim, Nepal and Green Zebras. “I bought them for their color, ripeness and smell, not the name,” insists Baldwin. Tender baby lettuces—bronze mignonette, Parris Island Cos, butter crunch, and Forellenschluss—grown for every meal by KK Haspel of the Farm, “were all lovingly babied and shaded by tents,” says Haspel.

Pickled eggs were showcased on three different menus including the last where wood platters dotted with eggs, new potatoes, roasted red onions and beets mingled with a heap of housemade aioli. “Eggs are just about my favorite thing to cook,” says Baldwin, who created a seven-minute pickled version, less acidic but saltier than the typical egg. The vegetable menu gave Baldwin the opportunity to explore the value of meat in relationship to other things on the plate. “That menu was the most interesting and the most difficult,” he says. “I’m a lusty meat eater, and it’s hard for me to conceive of a meal with no meat.”

The gatherings attracted a mix of locals and bold-faced names from the art, food and fashion worlds including Adam Rappaport, editor of Bon Appétit, who appeared on the last night. “There were rumors floating around that both Debbie Harry and David Tanis were coming to the second dinner. I got distracted by that and then neither of them came,” says Baldwin. From then on he made a point of ignoring the guest list to focus on the tasks at hand. At each meal, Prune alums headed to Orient to help prep, cook and serve.

“I can’t shake the feeling that the North Fork could use a casual restaurant that serves [and defines] the great food of the region,” says the chef. This fall the search begins for a permanent home for Houseman in New York City. Though the plans aren’t grand. “All I want is a neighborhood restaurant where we make enough money to pay our staff and pay the bills,” he says, adding, “so we can open the doors night after night, and I can keep cooking.”

The notion of community is not new to the restaurant world nor to the North Fork, and like church suppers of yore, potluck dinners in Orient have become central to the social scene.

“I cook food that makes sense to eat in the place you’re eating it. Sometimes the act of cooking seasonally accurate food in the city feels academic.”