From school gardens to snails, and from screw caps to stouts, a passion for food and drink is what unites this community. 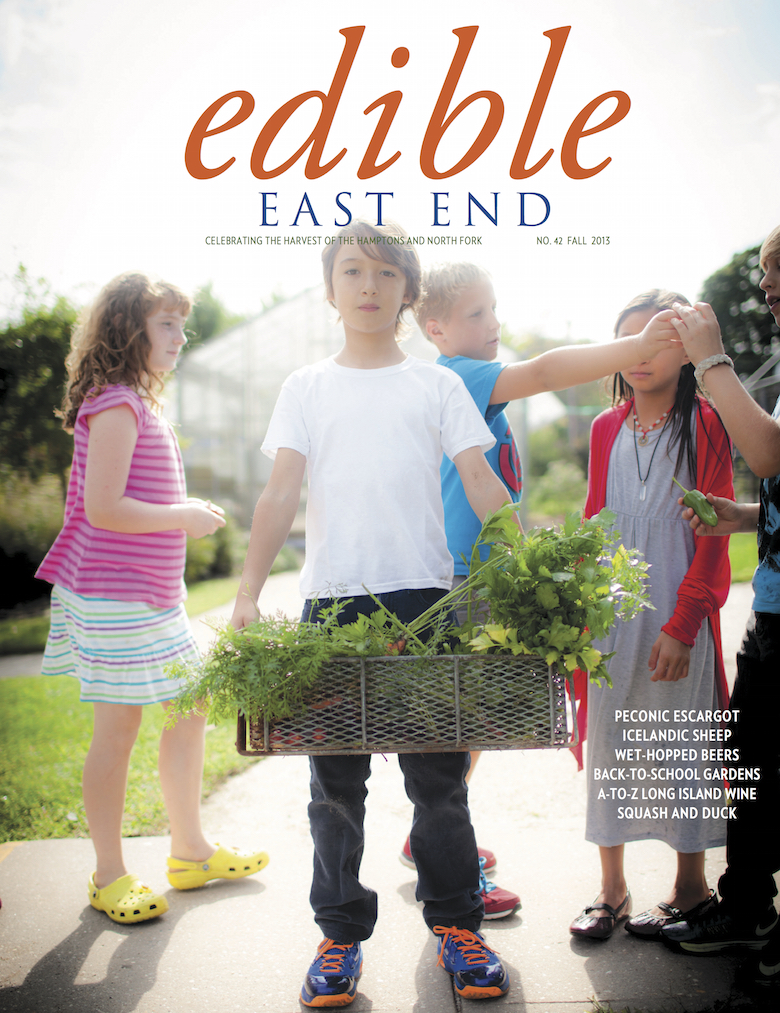 Last week, I sat down to a lunch of stir-fried veggie rice and baked tofu at the Hayground School in Bridgehampton. The meal was served family style to nearly 100 students, ages 3 to 13. Even more impressive, the meal was planned, prepped, cooked, served and cleaned up by the rotating squad from the student body who happened to be on lunch duty—or in their “culinary arts” session, in more technical terms. The kale came from the school’s own garden. The broccoli, eggplant and string beans came from a farm up the road. Teachers challenged students to try new things. Students challenged each other. “You’re not going to believe this, but there was eggplant in the rice,” announced culinary arts teacher Arjun Achuthan before the tables were excused. Eggplant had been a hard sell the week before in eggplant parm. In contrast the double-baked potatoes and Greek salad with beans served the day before was a resounding hit. “One convert a day is our goal,” said Achuthan.

As we describe in this back-to-school issue, Hayground is not alone. From Cutchogue to Calverton, nearly 25 schools on the East End have planted veggie patches; many are erecting greenhouses and chicken coops, building compost piles, setting goals to reduce food waste, even dipping into food politics—all with the goal of not only graduating healthy eaters but inspiring an enthusiasm and curiosity for food.

We smile when we see this passion growing in our classrooms, but a similar passion drives our food-and-drink community. You hear it from Greenport oysterman Mike Osinski, who glimpses the mysteries of the universe in his daily tilling of the waters. Or the vintners at Paumanok, SuHru, T’Jara and other wineries leading a crusade to close local wines with screw caps rather than corks. In the stamina of Tom Schaudel, the “defacto Long Island chef” who’s been slinging creative combinations of clams, corn and cauliflower for more than four decades. New farmers, like former financier Frank Trentacoste of Bhumi Farms in Amagansett, sometimes find farming a “land of hurt” but love when the spinach sells out.

Chef Taylor Knapp has tested the waters for a snail farm in Cutchogue and hopes to be delivering vacuum-packed critters to kitchens in the region and beyond. Carissa Waechter, a baker who swoons for farmers, is milling her own Long Island-grown flour and planning a 100 percent farmer-sourced loaf for hardcore bread lovers. In our crowd-sourced, A-to-Z list of wines to commemorate 40 years on Long Island wine country, you’ll glimpse the unique devotion that each winemaker pours into the bottle. And an orgy of three farms and four breweries just made wet-hopped beers—“an ephemeral pint of fresh”—that is only viable because the bloom of breweries piqued farmer interest in small-scale hop growing.

That’s how it’s supposed to work, says Waters Crest winemaker Jim Waters, sipping his 2008 Campania Rossa, a marvelous red made from a less-than-perfect vintage. “One
success is everyone’s success.”