The joy of dining in a farm field under a big moon. 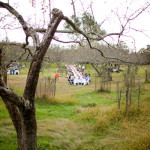 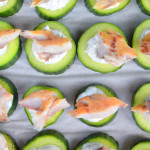 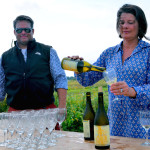 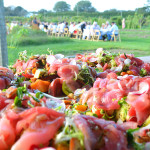 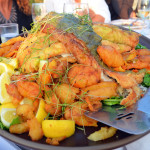 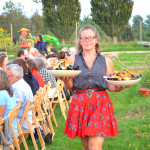 You dip down Deep Lane and park in a grassy area with row crops just beyond. Kick down a dirt trail to reveal multiple tables by the farm stand, one with oysters being shucked, another with Channing Daughters wine being poured. A truck with a portable pizza oven is parked, and Bryan Futterman of Foody’s and Joe Realmuto of Nick & Toni’s are making fresh pies with local veggies, mushrooms and cheese. You stop, mingle, indulge and then keep walking the dirt road over a knoll, and in front of you is an apple orchard with a white-clothed table set for 175. It is breathtaking. There are paper lanterns strewn from the trees and a stage for a band to play. Flowers and pickled vegetables from the farm adorn the table. It is magical. You have found yourself “at the common table” at Quail Hill Farm in Amagansett.

Over the last decade or so, we have found ourselves sitting at these crazy long tables in the middle of a field or farm or park more than two dozen times. These are bucolic, romantic and celebratory dinners that bring together local chefs, farms, wineries, fishermen and others to highlight, honor and praise the bounty of a specific community. We are lucky, our community attracts and supports these dinners often. We have participated in these feasts all over Long Island as well as the metro area. From EECO Farm in East Hampton to Queens Farm in New York City, Satur Farms in Cutchogue to a park on the Lower East Side. Each event is special, but the one described above stands out again and again. It has become our favorite event of the summer, and this year marked the 10th anniversary of the At the Common Table dinner at Quail Hill.

It must be said that much of the credit for these inspired fetes goes to Jim Denevan and his band of merry pranksters that put on the Outstanding in the Field dinners all over North America and now Europe. Channing Daughters participated in our first OITF in 2002 with the great chef Michael Anthony when he ran the kitchen at Stone Barns in Pocantico Hills.

As we all descended on the table, we were treated with a local feast to die for, prepared by Jason Weiner of Almond, Joe and Bryan as well as Laura Donnelly and Jeff Schwarz. A barrage of food hit the tables: warm duck salad with beets, sumac, almonds and grilled peaches (Jason); steamed mussels with potatoes and saffron (Joe); striped bass over tabbouleh (Joe); charred lacinato kale salad (Jeff); baby heirloom tomato salad (Jeff); twice-cooked fingerling potatoes with smoked paprika aioli (Jeff); salsa verde (Jason); roasted pepper salad (Joe); vegan tagine (Bryan); and rice pudding (Laura). It was, in the best way, intoxicating.

What makes this dinner so special is that it is truly a locals’ event. Often the guests come from far and wide, but At The Common Table is only open to Quail Hill CSA members. It is also a benefit for the cherished local organization the Peconic Land Trust, which celebrated its 30th anniversary this year and without which Quail Hill and many local farms would not exist. The community feel is confirmed each year when Scott Chaskey, our fearless farm leader, climbs the orchard ladder and recites poetry. The year, Realmuto climbed the ladder to add a few verses about the new community-supported fishery, Dock to Dish, which supplied the striped bass moments before it was cooked by the brigade. A brilliant moon rose over the farm, a band played music in the orchard, wine flowed and the magic of breaking bread together, eating and indulging in our community was life affirming.

To find out for yourself, sit in a field and eat, pour wine and cheer with someone you have never met, watch the sun set over the crops that provided the fresh food on your plate, celebrate the local bounty wherever you find yourself. In this fast world there are few and far between truly slow food moments like these.

James Christopher Tracy is the winemaker and a partner at Channing Daughters Winery in Bridgehampton.