A family of four stakes a claim with an Icelandic sheep farm. 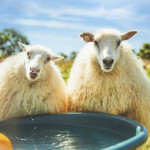 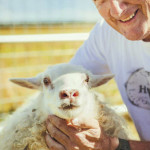 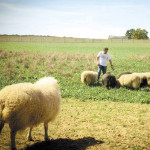 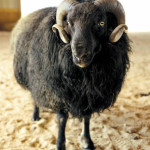 Your second child is born. Dark-haired, screaming. There are so many things you want for him. A doctor? A lawyer? A happy, good person? What about sheep whisperer? Did you ever look at a newborn and think: I’m going to turn this boy into a sheep whisperer?

Don’t worry, you don’t have to. Tom Geppel and his wife, Carol Festa, have already done it for you. Their son Max, eight, is the one with the soft touch and softer voice at 8 Hands Farm, their Icelandic sheep farm in Cutchogue, where a movie fed a nascent idea that turned into a major lifestyle change, an educational journey and another reason the East End is a food destination for visitors and inhabitants alike.

“The whole premise has to do with our food system,” says Geppel, who for the moment is keeping his day job as an accountant. “Farms and farmers are disappearing, food is being trucked in 1,000 miles.”

Geppel awoke to this fact after seeing Food, Inc., the 2008 movie featuring Joel Salatin of Polyface Farm. “It was the first time I really looked at the food industry, and he’s the kind of guy who really makes you think ‘I can do this.’”

Anyone who has heard Salatin speak or read one of his books can relate. I once heard him talk and went away believing that the stretches of land bordering the Long Island Expressway could help to solve hunger, diminish food’s carbon footprint, clean the air and lessen unemployment. I could see it.

But Geppel and Festa did it. Residents of the North Fork since 1994, the couple bought farmland in Cutchogue from the Peconic Land Trust in 2011. They wanted a farm, something that would occupy their children and instill a work ethic while being profitable and sustainable. After some deliberation, they thought, “Why not sheep?”

“I was thinking about the usefulness of the animal,” says Geppel, “and sheep are useful, triple purpose. You get wool, meat and milk. And this can depend on the breed itself; some are dual purpose.” A little research led them to Icelandic sheep. “I like the story behind them,” he says, “which says the Vikings brought them to Iceland making them the purest breed and more than 1,200 years old.” It didn’t hurt that the sheep are pretty, he added, as well as manageable. “They’re not cows.”

“The idea all along was twofold,” he says. “Education, to teach others and my family where their food comes from. And, second, to really show you can have a sustainable farm—there are people who are willing to pay for quality. And at least not to lose money.”

The experiment progresses. Currently the family has 28 acres on the Cutchogue farm and has rented another 22 where the sheep can graze. They’ve invested in a sparkling tractor, which Geppel used to clear the land. Festa’s father, an Italian immigrant with a green thumb, has commandeered the two acres set aside for a “kitchen” garden that, by next summer, the family hopes, will produce enough to stock a farm stand.

And then there’s the sheep. Icelandic sheep rarely have single births. Twins and triplets are par for the course, so herd numbers can increase exponentially. The family started with 13 sheep bought from two different breeders in Virginia and Maine. Last year they bred 16 and got 28; this year they’re looking to breed 25 and get in the high 40s.

Here’s where you look at your first child and wonder if you hadn’t bought a farm if she would have found her calling as a sheep breeder. Olivia, 13, can walk among the herd and see what color wool will result from the breeding of any particular ewe or ram. Part of the knowledge comes from her membership in 4-H, where she has been taught to show sheep. But, her parents say, her appetite for reading about the sheep is filling in knowledge gaps they didn’t know they had. She is an Icelandic sheep historian, knows how to deworm, thin hooves and the best diet for cheese and meat. “She’s got a good sense for color genes,” says her mother.

Which matters when selling wool. The sheep are sheared twice a year by a 68-year-old man who comes down from Vermont, says Geppel. By his account, Icelandic sheep aren’t as docile as others, so he had to stay the night. Volunteers quickly gathered—word travels fast in the fiber community—to pick through the fleece and sort for sale. Some would buy an entire fleece, says Geppel, while others would mix the wool from sheep of different ages to get the texture they wanted.

As far as meat production, the family has one guaranteed customer: Gerry Hayden of the North Fork Table & Inn in Southold. He buys all the premium cuts, the loin roasts and the racks of ribs. The rest Geppel made into kabobs and shanks and ground meat. It’s sold by word of mouth and at the farmers market behind the restaurant. Like other meat producers on the East End, Geppel and Festa have to leave the island for butchering and processing, because we lack a USDA-licensed slaughterhouse. The cuts are frozen or vacuum-packed; Geppel sees them for sale next to tomatoes and wool at the planned farm stand.

For the most part, he says, the sheep take care of themselves. But every once in awhile they need some help. “I never thought of having to stick my hand in to help deliver a lamb,” he says. “But when a ewe needs you…you’ve got to be there to watch, and it’s messy.” Olivia says she can recognize the sheep by their “baahs,” and that they all have different personalities, which earns them names. But the children understand when it’s time to slaughter, says Geppel. “The sheep are not pets. They have to earn their keep like the rest of us.”

It may have taken only an octet of arms to begin 8 Hands Farm in Cutchogue, but that number has been multiplied many times over to produce the family agri-venture’s first event—a family-style feast to raise funds for the fight against A.L.S.—which will be held on Cox Lane this Columbus Day weekend.

The paterfamilias of 8 Hands Farm, Tom Geppel, said he and wife, Carol Festa, found kindred spirits in Gerry Hayden and Claudia Fleming of the North Fork Table & Inn after the culinary couple sought the local farmers out in search of meat from their herd of Icelandic sheep.

A shared passion for knowing one’s food by knowing one’s farmer became the basis for the friendship behind Geppel’s agreement to speed up the renovation of 8 Hands Farm and host the fund-raiser, which will include a dinner prepared by more than 10 of the East End’s finest chefs and an auction emceed by Tom Colicchio.

Hayden, who was diagnosed with A.L.S. last year, hopes the event will yield $75,000 to benefit national re- search of the disease, as well as patient care through the Greater New York chapter of the A.L.S. Association, including his own.

“It’s debilitating,” Geppel says of Lou Gehrig’s disease, which has been systematically robbing Hayden of his ability to do all he loves and does best in the kitchen.

Icelandic sheep rarely have single births. Twins and triplets are par for the course, so herd numbers can increase exponentially.