The matrimony of farmer and brewer births once-a-year brews. 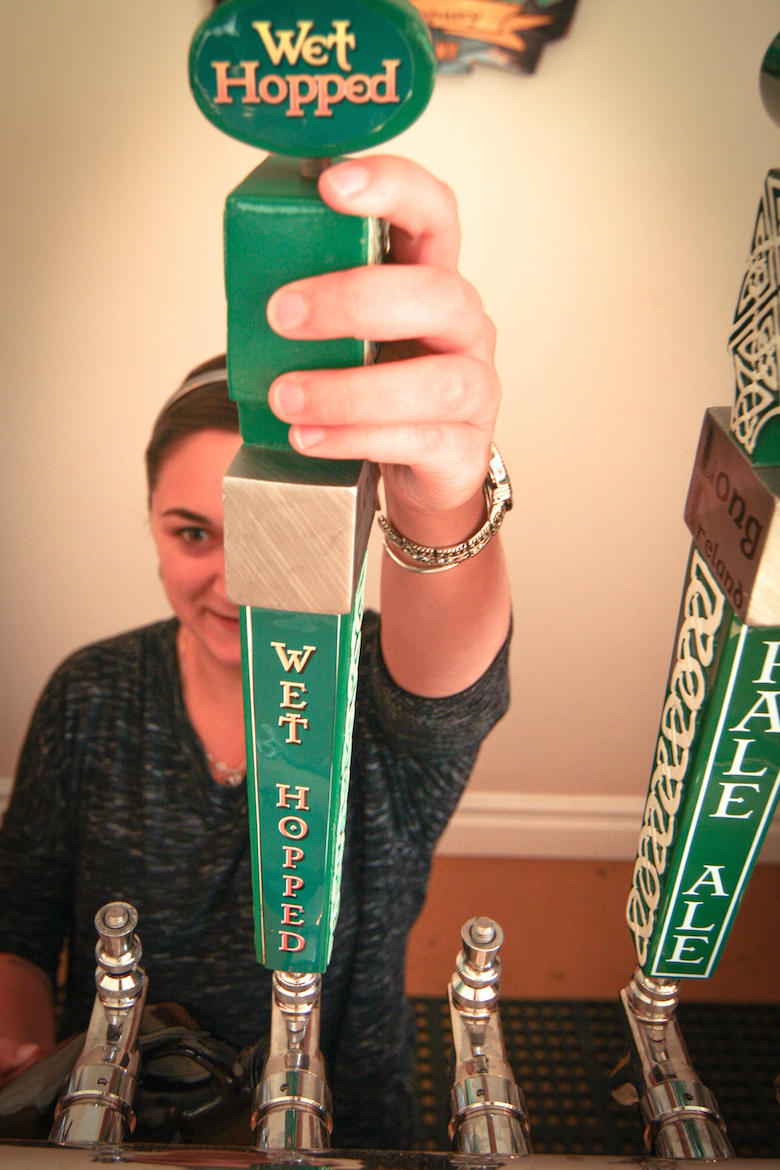 Hops are a basic component of beer. The sky-climbing perennial is usually dried, which enables storage and year-round use, but its annual harvest presents a unique opportunity for brewers to use a super-fresh version. These undried greens, or wet hops, are only optimal immediately following harvest, traditionally during August and September. This limited window of usability has held back Long Island-based brewers, who were without a local hop-cultivating source. Well. Until now.

“The emergence of hop farms on Long Island and the need to brew with wet hops within 24 hours of their harvest makes these beers hyper-local by necessity,” says Greg Doroski, brewer at Greenport Harbor Brewing Company. “The recent explosion of craft beer on Long Island has made small-scale hop farming economically viable, but farmers need the continued support of local brewers, and vice versa.”

There is a beer-induced buzz on Long Island. The surge of local breweries has heightened a demand for local ingredients, and some farmers have responded with hops. This matrimony has birthed a crop of wet-hopped beers in 2013, providing consumers with an ephemeral pint of fresh.

It’s a celebration of our terroir, our artisans and, essentially, us.

The trellis-towering section of Condzella’s Farm is Condzella Hops, launched by John Condzella in 2011. A fourth-generationer on his family’s 20-acre farm, Condzella harvested 800 pounds in 2013. The gather was efficiently performed with the German-manufactured Wolf WHE 170 Hopfen Pflückmaschine, a hop-plucking apparatus bought using Kickstarter. It replaced Condzella’s previous, and tedious, method of handpicking. “Getting the machine physically here and operational was a real challenge that I spent all my summer on,” says Condzella. ”Seeing it run the way it does and knowing that harvesting will never be an issue again was worth all the trouble, though.”

After experimenting with small hops crops during residential stints in California, Washington and Hawaii, Andrew Tralka and Jaclyn Van Bourgondien returned to New York and planted one acre on a family-owned parcel in 2012. “We started homebrewing in 2006 and have gotten more and more involved and intrigued by all that goes into creating a delicious beer,” says Van Bourgondien. The couple harvested 200 pounds in 2013, which were used in new beers by breweries in Connecticut and New Hampshire. Bay Shore’s Great South Bay Brewery also grabbed Farm to Pint’s hops for recent batches of Field 5 Golden IPA and Massive IPA.

Justin Wesnofske, a third-generation tiller of his family’s 50-acre farm, also works with Greenport Harbor Brewing Company. He planted “about one-fourth of an acre” of hop rhizomes in 2011 because “it was a perfect way to tie in my farming background with my passion for great craft beer.” He harvested 60 pounds in 2013.

Greenport Harbor Brewing Company released a wet-hopped blonde ale in 2010, but the 30-barrel batch of Wet Hop Harbor Ale is a new beer and an opportunity to present a different version of Harbor Ale, the brewery’s flagship. Harbor Ale is a “moderately hoppy pale ale with a dry finish, due to the presence of crystal wheat malt,” says brewer Doroski. The switch to a trio of wet-hop varieties, including Cascade from a resident of Cutchogue, presents a “delicate grassy aroma and fresh flavor more noticeable by keeping the grain bill the same.”

An additional 10 pounds of wet Condzella Hops-grown Cascade were used in the latest batch of Port Jeff Brewing Company’s Fresh Hop Ale, which debuted in 2012. The increase of hops, combined with a “more mature and oily cone,” says Michael Philbrick, owner and brewmaster, ”creates a more aromatic and pungent beer.” Philbrick prefers an “extra-light grain bill of pilsner malt and some specialty malt for color” to showcase the hops’ ”floral, grassy, herbal” characteristics. Port Jeff created one 14-barrel batch of Fresh Hop Ale.

*These farms harvested the most hops for commercial use in 2013.

**These beers were brewed with wet hops birthed on Long Island. Availability varies.

Long Ireland Brewing Company in Riverhead is selling their Wet Hopped Pale Ale by the growler at the brewery and by the bottle.

Hops are a basic component of beer. The sky-climbing perennial is usually dried, which enables storage and year-round use, but its annual harvest presents a unique opportunity for brewers to use a super-fresh version.