Q & A With Bob Gammon of Woodside Orchards

When shadows begin to stretch and the word “crisp” begins to describe the air, there’s one thing that comes to everyone’s mind: apple season. As a native North Forker, I have always looked forward to the fall months: Krupski’s pumpkin patch, Harbes’ roasted corn, Briermere’s fruit pies. 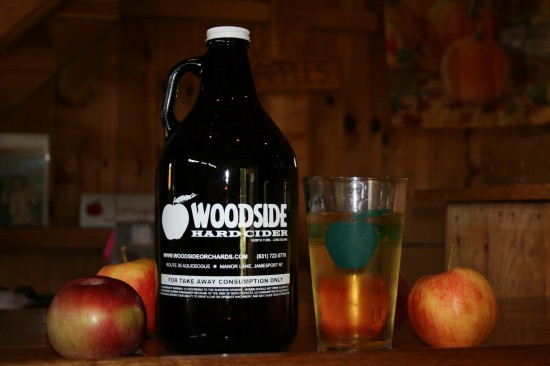 When shadows begin to stretch and the word “crisp” begins to describe the air, there’s one thing that comes to everyone’s mind: apple season. As a native North Forker, I have always looked forward to the fall months: Krupski’s pumpkin patch, Harbes’ roasted corn, Briermere’s fruit pies. However, apples seem to steal the spotlight year after year. Anyone from the North Fork knows Woodside Orchards is the place to go for fresh apple cider, u-pick apples and cider doughnuts. While driving east on the popular North Fork Wine Trail, I noticed a small barn off Route 25 in Aquebogue with a Woodside Orchard sign out front; underneath it read two of my favorite words: hard cider.

The Gammon Brothers, Bob and Scott, debuted their hard cider in 2012 along with their usual fresh apple doughnuts, apple butters and fruit pies. This May, however, they opened their hard cider tasting stand for business. Being the apple lover that I am, and a loyal Woodside Orchard customer, I decided to stop and pick Bob’s brain.

How has business been since you opened the cider tastings in May?
It’s been very good. The reception has exceeded our expectations. We’ve had days where our refills have exceeded sales. All four ciders at the end of the month seem to sell within 4 percent of each other. It’s full speed ahead.

The flavors right now are traditional cider, traditional sweet, apple raspberry and apple cinnamon. Do you plan to introduce any new flavors?
The goal is to have four to five stable products and then do a limited release of different things. Sometime between Halloween and Thanksgiving we’re hoping to release a ginger apple as well as a cherry apple.

You use all natural ingredients, so can you explain a bit of the cider making process?
It’s about a four- to six-week process. We grow the apples here in Aquebogue and Jamesport. The cider mill is in Jamesport where we turn the apples into juice. We bring it over here and we do the fermenting in tanks here. We pitch the yeast, let it go, depending on what we’re trying to accomplish, starting sugar levels will vary, sweeter apples for additional sweetness. We try to keep all the ciders around 6.5 percent alcohol by volume. Anything over 7 percent we have to call it an apple wine, so we try to keep it just under that threshold.

With grapes dominating the North Fork, what are some of the challenges you face out here on the East End with apples?
When you’re in business, everything seems to be a challenge. It’s working out for us though, our timing is good. Cider is trending now from a national standpoint. Samuel Adams has Angry Orchard, Heineken has Strongbow, so there’s a market for it. We are on the wine trail, but it works out well for us. There seems to be one or two people in the party that aren’t into wines. The cider is between a beer and a wine. People are intrigued.

Do you have any competition out here?
Not so much. I’m sure in a few years there will be. We grow our product here; we’re basically apples and raspberries. We pitch a domestic yeast, no additives, no preservatives.

So where would you like to be in the next three years?
I’d like to find where the sweet spot as a whole is, and try to stay within that. Next year, we would like to reassess where we are and how we got to where we are and game plan from there. I envision picking up a limited number of restaurants, supply a few local and maybe a few up west. We have had a few distributors talk to us, but we’re just not there yet. Apples are only available for a limited period of time, so turning out the product can be a challenge. We either need more tank space or more space, period.

So tell me about these tastings.
For $6 you get 16-ounce tastes of each cider, and you can keep the glass. The growlers are selling quickly. Right now we have 64-ounce growlers for $16 and refills for $13. We’re also going to have half growlers, which are 32 ounces and will be around $9, $8 for refills.

I love the logo. At first, I didn’t notice the leaf on the stem of the apple was Long Island, very clever.

People seem to like our logo. If we get into Manhattan, we have the big apple at the end of Long Island, so it all kind of fits.

Taking in the quaint space and North Fork décor, the apple scents, cookies, pies and doughnuts, I found myself quickly returning to the bar for more refills. I’m looking forward to limited editions and new releases, perhaps even a pairing menu in the future.

If you’re planninge a day trip out east, try something a little different on the wine trail, or just enjoy some local scenery this apple season, make sure to stop at Woodside Orchards in Aquebogue and visit the Gammon Brothers.
729 Main Road, Aquebogue, NY
631.722.5770
facebook.com/WoodsideOrchards

Jackie Carlson is a recent college graduate with a BA in professional writing. A native East Ender from Southold, she enjoys writing about restaurants, wineries and breweries from Orient Point to Manhattan, tasting everything in between.