Squid in the Maize: A Story of Creativity

Squid in the maize? This unlikely thought managed to conjure up some culinary magic by two competing chefs at New York Sea Grant’s second annual Chef Seafood Throwdown on August 9 at Grown on Long Island Day. 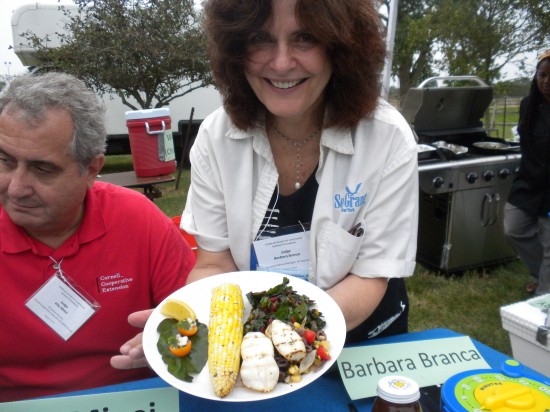 Squid in the maize? This unlikely thought managed to conjure up some culinary magic by two competing chefs at New York Sea Grant’s second annual Chef Seafood Throwdown on August 9 at Grown on Long Island Day at the Suffolk County Farm and Education Center, a day to showcase locally grown produce, fresh caught seafood and artisanal foods and products.

Chef Bhavani Jaroff of Slow Food and host of the iEat Green radio show went grill-to-grill with Chef Okima Wilcox of BlonDees in Huntington to prepare a dish using two mystery ingredients.  The coolers were opened to reveal fresh local squid from Shinnecock Bay and sunshiny ears of sweet corn.

With an hour to cook and plate for the panel of three judges, Wilcox came out the winner with her take on calamari pescatore, edging out Jaroff’s grilled calamari with Mediterranean tapenade. Both chefs brought three of their own ingredients and were supplied with olive oil, garlic and lemons and some cash to spend at the farmers market.

After grilling the squid, Wilcox prepared a savory balanced sauce of fresh plum and yellow tomatoes, garlic, basil, lemon and pink salt. But the addition of her own smoked Spanish paprika and smoked local bluefish pate (from the Little Fish Store in Hampton Bays, which also donated the squid), added depth and creaminess to the sauce that adhered to the rings of tender calamari. The corn, removed from the cob, was paired with tiny curls of raw mustard greens, giving the dish real pop and crunch. Assistant Suzanne Schmitt had at first cooked the greens, but in a bold move, switched to the raw with inspired results. Rounding out the plate were crostini made from a buttermilk artisanal loaf from North Fork Chocolate Company, a recent success of the Stony Brook University small business incubator.

Jaroff, with assistance from Devin Sheppard, presented perfectly grilled arrowheads of squid with a Mediterranean kick of kalamata olives and a rainbow of vegetables: chard, zucchini and zesty cilantro-stuffed cherry tomatoes. The corn, brushed with olive oil and herbs, was grilled in foil.

It was a close one, but with the play-by-play emceed by on-air host Bonnie Grice of WPPB Southampton, both chefs came out winners.

Barbara A. Branca is the communications manager for New York Sea Grant.