Farmers in Suffolk County are working to improve water quality, reduce fertilizer use and maintain their position as a national leader in farmland conservation. Due to the East End’s shape and proximity to the ocean, access to clean drinking water has always been an issue. In an effort to face this problem, 16 farmers are teaming up with Cornell Cooperative Extension and the American Farmland Trust, the leading nonprofit in farmland conservation. These groups have developed the BMP challenge, which eliminates financial risk for farmers who implement innovative farming practices. In the last year, these farms have already decreased nitrogen use by 20 percent. 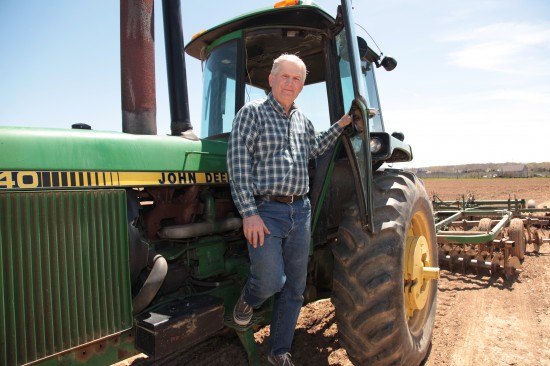 Marty Sidor of North Fork Potato Chips. His family has been farming on the North Fork for more than 100 years, and he calls the controlled-release fertilizer “very user-friendly.”

Farming is a larger contributor to New York’s economy than any other county in the state, even though the number of actively farmed acres in the county has been greatly reduced in recent decades. This success is due, in part, to the farmers’ willingness to adopt innovative practices, work in cooperatives and consider community impact. “Everybody has to do their part as far as nitrogen is concerned. Anything you put in the soil is going to end up in the water if there is too much of it,” says Jennifer Halsey, whose family has been farming on the South Fork for 12 generations.The program offers a glimpse of a potential model for coastal communities across the country that struggle to moderate the flow of nitrogen into their waters. The only necessary ingredient is farmers’ participation.

Left: Jennifer Halsey Dupree with daughter Kay, whose family has farmed on the South Fork since the 1640s. Right: John Halsey with granddaughter Kay.

The Halseys own one of 16 family farms experimenting with new farming practices. These farmers are now testing a controlled-release fertilizer, which isn’t absorbed by dissolving in rainwater. David Haight, of the New York office of the American Farmland Trust, hopes “Suffolk County will once again be a national leader [in the farmland conservation movement] by demonstrating that it’s possible to work with farmers to protect water quality while keeping farms economically viable.”

Phil Schmitt of Schmitt Family Farm. The Schmitts have farmed in the area for 150 years.