The Four Sides of Keith Luce 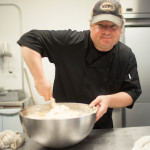 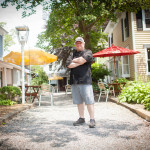 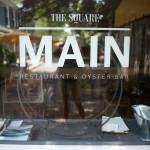 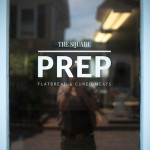 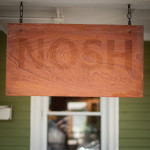 After raising $51,090 for a local-sourced charcuterie program on Kickstarter, Luce expanded his do-it-yourself plans and purchased four buildings in Greenport’s Sterling Square in March with his company, NoFo Hospitality Holding. The complex, at 300 Main Street, immediately inspired him.

“I wasn’t expecting it, but it was the first time I saw past the ideas and saw the finished project,” says Luce. “It spoke to me.”

Opened in May, “The Square” has four components: “Prep,” “Nosh,” “Meet” and “Main.” While each showcases a different side, or piece, of Luce, the four collectively present “everything I’ve ever wanted to do as a chef in one block.”

Prep is Luce’s workstation and playground for culinary experiments. A day’s tasks may include churning gelato for Nosh, curing meats—Luce has already charcuteried pancetta, bacon, lonza and prosciutto and will continue to expand the Kickstarter-originated program—extruding pastas or, during my visit, roasting brined turkeys at varying temperatures for a nostalgic Thanksgiving sandwich. Prep also has a walk-up window menu with artisanal street food, so customers can order the Lucifold, a wood-fired, falafel-like flatbread with guanciale, ricotta, arugula and olive oil, directly from Luce and view the entire preparation. “Even when people were coming to my restaurants during the latter part of my career, I may not have been there all the time. It’s just not feasible in fine dining. There’s nothing more rewarding than crafting something from scratch and handing it to someone.”

If Prep is Luce’s workstation, Nosh is his exhibition, and every piece is created for admiration and consumption. The café’s centerpiece is a display case with Prep-prepared salads, sandwiches, bakery stuffs and 18 flavors of gelato. The latter includes several adult-only flavors, such as Champagne apricot-raspberry and Montmorency cherry merlot. “It’s a place to hang out with a cup of coffee and grab a quick bite to eat,” he says.

Meet opened in July, nearly two months after the Square’s other components. The two-floor space, Luce’s most intimate, is “not only a place to meet friends, but also sommeliers, brewers and others who make your favorite goods.” The higher level sells packaged products, including Luce’s favorite cookbooks, kitchen implements and, eventually, his own line of charcuterie and other items. The lower is a speakeasy-vibed tasting room pouring only New York wines, beer and spirits. “This is the end of the wine trail on Long Island, and everyone has their own niche,” he says. “We wanted to offer more than local, so it’s a good place to end up for something different.” Meet also offers culinary demonstrations.

Luce, aware of the Square’s unorthodox concept and the potential for community apprehension, designed Main as a “traditional restaurant with fun American-style comfort food.” The “fun” is North Fork inspired and includes housemade spaghetti with pancetta, shrimp-lobster corn dogs and, of course, NoFo duck wings. If one prefers some global influence, the former location of North Fork Oyster Company also has a reconstructed raw bar with all five oyster species: Crassostrea virginica, Crassostrea gigas, Crassostrea sikamea, Ostrea conchaphila, and Ostrea edulis. The selection exhibits Luce’s expansive culinary background. “You can get local oysters anywhere on Long Island, but I’ve worked in Europe and the Pacific Northwest and have connections to get them just as fresh. You can strengthen a region by exploring and comparing local to other parts of the world.”