Talk to Me of Tomato

Knowledge is knowing that a tomato is a fruit, wisdom is not putting it in a fruit salad. 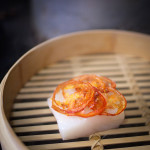 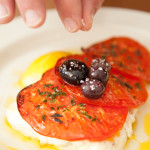 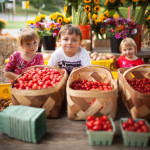 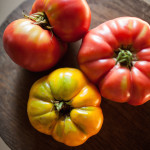 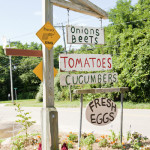 Cooper Farm in Mattituck grows tomatoes, eggplants, peppers, cucumbers, melons, farm eggs and more on the 25 acre farm. Vistors are invited to pick their own or have it picked for you. (July 30, 2011) Photo by Randee Daddona 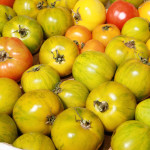 My uncle Murray Bernstein moved his family from Long Island to California in 1958. When family visited them the following July, the car reeked of ripe beefsteak tomatoes from my father’s garden. The one thing Uncle Murray most missed was a “luscious Long Island tomato.”

Beefsteaks are too thin-skinned to be delivered commercially, but they, or their relatives and descendents, can be found at farm stands all summer. At the end of the season, unripened, they make the best fried green tomatoes.

There may be more commercial tomato products and brands on your supermarket shelves than any other item, from sauces to juice, soups to ketchup. This popular fruit—yes, it is a fruit even though it’s thought of as a vegetable—contains lots of lycopene, a powerful antioxidant. It’s acidic enough to be canned like a fruit: no bothering with a waterbath, and you can snack on the pear-shape and grape-size babies, well, like grapes!

All varieties of tomatoes, the kind commercially grown for shipping, the tiny ones that squirt sweetly across your tongue when you bite down, the “antique” or “heritage” oddly shaped and striped in rainbow colors fruits, the elongated plummy pomi d’oro (Roma) used predominantly for sauce—around 7,500 types in all—need a long growing season in sweet soil and full sun. A word to the wise: don’t even try to compare pale, bland winter tomatoes, even if they come on the vine, with those picked ripe from the field or your backyard.

If you don’t have access to a nearby farm stand, grow your own tomatoes in a tub or pot or trough on your front stoop or deck. Once thought to be poisonous, thus inedible, when they were introduced around the world after the Spanish colonized America, tomatoes are still decorative, but you can eat the display!

Joan Bernstein lives in East Moriches and likes to recall the tomatoes of her youth.