Snappers: Eat or Be Eaten

The author teaches his son to get the blues.

The author teaches his son to get the blues. 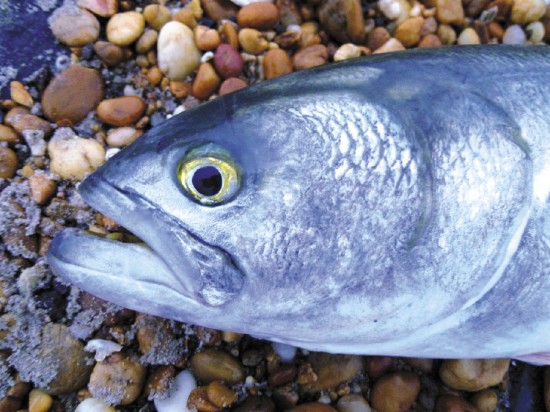 Bluefish eat everything. They keep on eating everything their whole lives. And then at some point something eats them. Getting a child involved in this drama is how you teach a kid to fish in New York State’s saltwater.

Which is what I resolved to do last summer. Word had come in that schools of juvenile bluefish, also known as snappers, were just reaching Reynolds Channel, a narrow strip of water running between Long Beach and the mainland portion of Long Island. I put my five-year-old son, Luke, in the back seat of my beat-up Honda Civic and next to him put his friend, the slightly older and more experienced Felix.

As various complaints came from the back seat over the length of time it was taking to get to Long Beach’s Magnolia Pier, I considered how long it had taken the snappers. Bluefish begin their lives off North Carolina, where they hatch in immense numbers in two separate spawning events—about a million eggs per female in either the spring or summer spawn. For 20 days the larvae bounce around the edge of the continental shelf, feeding on copepods and other microscopic creatures and in turn being fed upon by pretty much anything that is just a little bit bigger than they are.

After many of the original millions have been eaten, the survivors begin the process of “recruitment,” as fisheries biologists call it—the assumption of size and physical characteristics that make bluefish pursuable by humans. Their eyes turn cat-eye yellow. Their sides grow sleek and silver; their backs, blue-green. Soon they are riding the Gulf Stream past the Slope Sea, all along the way eating, all along the way getting eaten. When they finally slip into New York estuaries in mid-July, they are ready, actually desperate, to put on as much size as possible so as not to be eaten themselves. Which is the precise moment children like Luke and Felix come upon them.

We arrived at Magnolia in time for the very snapper-y last three hours of the flood tide. And this iconic snapper pier with its nice wood planking and sturdy rail was feeling fishy. Rigging up Luke’s and Felix’s poles was easy. One of the beauties of snapper fishing is its Huck Finn simplicity. A small hook baited with a small fish, usually a spearing or a sand eel, is mostly what’s needed. To spice things up the pursuer of snappers usually adds a bobber—a little colored plastic float affixed to the line 20 to 30 inches above the bait. The snapper is attracted by the flash of the baitfish as it tumbles downthe water column. The kid with the pole is in turn attracted by the twitch of the bobber when the snapper hits the bait below.

As simple as it sounds, snapper fishing has a tricky you’ll-knowit-when-you-got-it aspect. Pull too soon after the snapper’s strike and you’ll end up with half a piece of bait. Too late and you get an empty hook. Felix, the older, more experienced child, got the wrist snap just right and soon boom, boom, boom, three snappers were in the pail.

Tears ensued. It wasn’t fair, my son insisted. He was terrible at snapper fishing. He was the worst snapper fisherman ever. But as his tears dried on my shoulder I saw out of the corner of my eye his bobber plunge and I pulled back on the pole. Luke reeled in successfully and another fisherman was recruited.

By the end of the afternoon the final score was six to two, far short of our legal limit of 10 per person. They ranged in size from a skimpy four inches to a whopping nine.

While bluefish bag limits are now the norm in most states, no regulator has had the guts to establish a size limit. A few years back, state fisheries officers contemplated the action, prompting such an uproar from tackle shop dealers, children and seniors (the primary beneficiaries of the snapper run) that they backed off.

There are also biological justifications for the lack of a minimum size. First, bluefish stocks are generally considered in good shape. Second, as Mark Terceiro of the National Marine Fisheries Service told me, “bluefish grow so fast during the first few years of life and are vulnerable to the inshore recreational fishery for just a few months in the summer and fall that a size limit doesn’t seem to affect overall yield.” In other words get ’em while you can. They’ll be gone tomorrow.

Once we’d brought our catch home, I had to decide on a cooking approach. Snappers, unlike mature bluefish, have good but not overwhelming oil content and are something of a switch hitter in the pan. They can be simply breaded and fried like a white-fleshed fish or accented with more oil and brought into the realm of a fresh sardine.

Since some of our catch was genuinely sardine-like in size I chose a favorite Genoese sardine recipe by Marcela Hazan. I sliced potatoes thinly and set them to roast with garlic, olive oil and parsley at 400 degrees, then turned to the fish. I scaled each side, split them down the middle, and worked my fingers around the edges of the ribs and snapped the spines at either end. Cleaning them this way, I was able to remove the rib cage and produce a largely boneless butterflied fillet (the skin is edible). I then marinated the fillets in more olive oil, garlic and parsley. 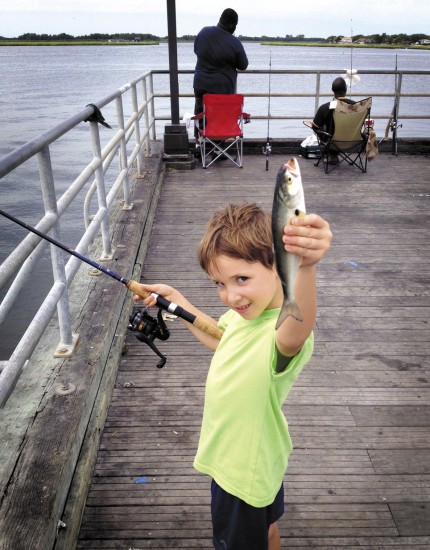 When juvenile bluefish slip into New York estuaries in July, they are desperate to put on as much size as possible—which makes for great fishing.

When the potatoes were cooked through, I laid the fillets on top and cooked for just five more minutes. Soon our snappers, which had crossed the continental shelf, traversed 800 miles of open water, evaded fluke, striped bass, weakfish and hundreds of other predators, were finally eaten.

As for the snappers that had escaped us back at the Magnolia Pier, they would go through another transformation, gaining three to five more inches before departing again for the continental shelf in October. And a year later they would reach their full size, 20 to 30 inches, five to even 10 pounds. At that size they would find a whole new range of things to eat: mackerel, menhaden, entire squid swallowed in a gulp. But they would in turn be feasted upon by giant tuna, swordfish and especially mako sharks, whose diet is 75 percent bluefish. The recent decline of the mako from overfishing and bycatch in the tuna fishery may be one reason the bluefish stock is in such good shape.

It is a fish-eat-fish world out there in the big blue ocean. Luckily for us, for a brief few months, we and our children get to step in between the links of the marine food chain and take a few bites for our ourselves.