’Tis the season of pendulous muskmelons, bruise-prone tomatoes, over-ripe plums. These sun-soaked treasures are never sweeter or juicier than now, when farmers pull them from sun-soaked fields that prod plants to swell fruit. 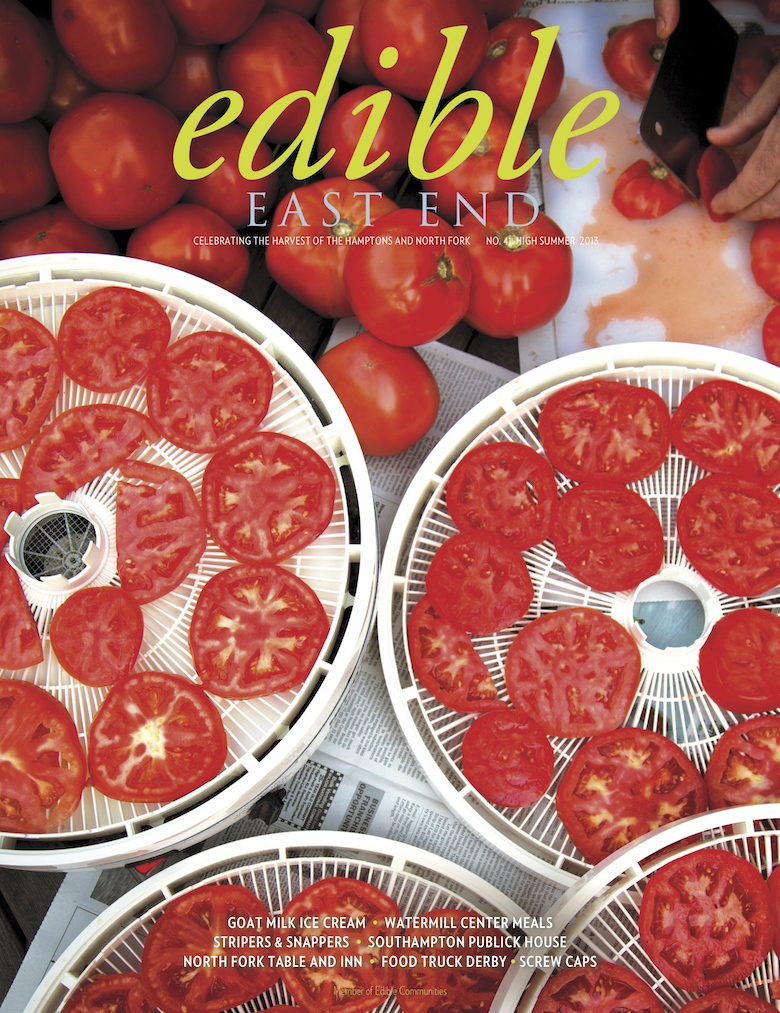 ’Tis the season of pendulous muskmelons, bruise-prone tomatoes, over-ripe plums. These sun-soaked treasures are never sweeter or juicier than now, when farmers pull them from sun-soaked fields that prod plants to swell fruit.

Naturally, this photosynthetic bonus provokes a frenzy of activity. On farms, in home kitchens, on Main Street, we rise early and stay up late. Moriches cook Joan Bernstein urges us to fill our breakfasts with tomato egg pancakes, our lunches with tomato sandwiches and our evenings with sauce-simmering and slice-drying that captures the “luscious Long Island tomato.” We consider eating watermelon all day. We adopt a goat so we can make more ice cream.

The fleeting opportunity is enthralling. But also exhausting. After all, eating too many tomatoes will make your cheeks pucker. “It is more of a struggle than a pastoral cornucopia,” writes Marilee Foster, who maneuvers irrigation hoses to save crops from drought and marvels at “how miraculous and tentative every bite actually is.”

At the North Fork Table and Inn in Southold, we glimpse a “screen door being worked pretty hard,” as chefs ferry sides of McCall Ranch beef, baskets of KK Haspel’s greens and cases of the Old Field Vineyards in and out, in a “parade of deliveries” that continues until dinnertime. The next town over, in Greenport, the peripatetic chef Keith Luce is packing it in with a four-part experiment in food processing, merchandising, communing and serving. At the Watermill Center, an expanded focus on food culture enhances cross-cultural collaboration. “All of the planting, gardening and weeding we’ve done ourselves,” says Robert Wilson of a new rooftop garden. “If you make a table, it has a different feel than if you buy it.”

On land or at sea, food often comes in floods, rather than a steady drip. Oysterman Mike Osinski makes a bargain that yields him a bumper crop of Plum Gut bass. “For a brief few months,” Paul Greenberg writes, “ we and our children get to step in between the links of the marine food chain and take a few bites for ourselves.”

Some things never go out of season, like Long Island wines—increasingly poured on tables in London, Sydney and Beijing—and Southampton Publick House suds, which are popping up everywhere as this longest active-running brewery on Long Island evolves with a new brewer.

And if you keep your eyes peeled along roadways, farm margins and wetlands, by early August, you’ll spot the prehistoric crimson cones of the sumac tree, which yield a thirst-quenching tea. But cut them while you can. By late summer, thunderheads will have washed out their color and flavor. And you’ll have to wait for next year.