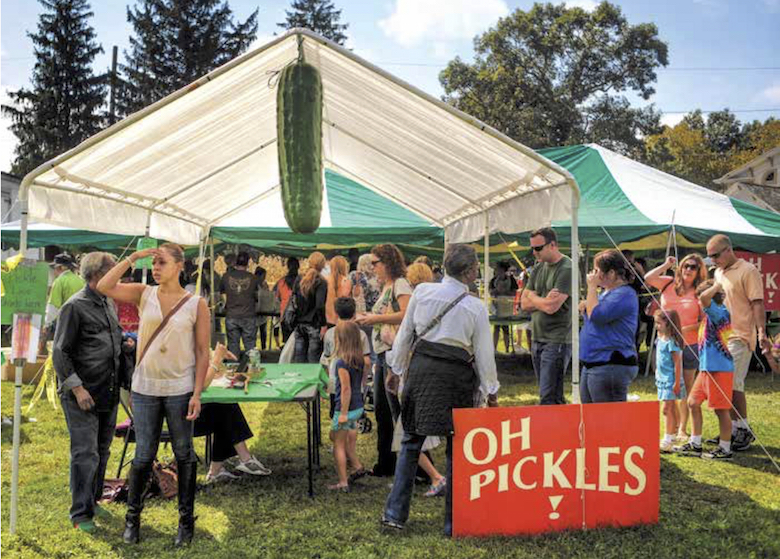 The Greenlawn-Centerport Historical Association was founded 40 years ago. For the past 34 years they have been sponsoring the ever-popular Pickle Festival, which hit record numbers last year when 5,000 people came out to buy and taste pickles.

Why pickles, you may ask? Greenlawn was abundant with cucumber and cabbage farms, and one of the largest pickle works, operated by Alart and McGuire, was built in Greenlawn Village back in the 1870s. Before the Long Island Rail Road was extended through Greenlawn in 1868, farmers had to cart their produce to Hicksville or further west. Once the railroad was built, several processing plants were constructed along the tracks in Greenlawn. Farmers would pick the cucumbers by hand from mid-July through late August. The cucumbers would be counted and stored in large wooden barrels, which were then loaded into wagons and brought to the pickle works. At the plant, the cukes were put through various brining processes depending on whether they were to be made into dill pickles, sweet pickles, sour pickles or other varieties. The pickles were then shipped in heavy wooden casks to New York City and Brooklyn. By the early 1900s, farmers were paid between $1.50 and $2.75 per thousand.

Alexander Gardiner, whose property was located on Park Avenue near Lake Road, was known as one of Greenlawn’s Pickle Pioneers. Born in 1835, Gardiner saw the advantage of growing pickling cucumbers as a cash crop, so he built several buildings on his property and rented space to several pickle processors.

Then there was Samuel Ballton, who was known as the Pickle King of Greenlawn. Ballton was born a slave in 1838 on a plantation in Westmoreland, Virginia. It is said that he and his wife walked 50 miles in 14 hours to Fredericksburg and freedom. In 1873 they arrived in Greenlawn, and Samuel became a farmer with Charles D. Smith. Later, he sharecropped on the Gardiner farm where he became a highly successful grower of cucumbers and cabbages. Ballton earned his title as “Greenlawn Pickle King” after he raised 1,500,000 pickling cucumbers in one season.

Samuel Ballton began to buy land in Greenlawn, where he built houses and then sold them for a small profit. Some of the houses he built are still standing in Greenlawn today.

Russell Brush was another prominent pickle farmer in his day, and the Brush family name is well known in Greenlawn.

Growing cucumbers was quite a lot of work back in the day. To prepare the fields for planting, manure would be put down, and then the fields were plowed and harrowed. Furrows were smoothed, and rows were marked for the plants. Carrying a cloth bag over his shoulder, the farmer would drop about six seeds in a little hole that he made with his foot. The seeds were planted approximately 2½ feet apart. Once the plants came up, they had to be cultivated every few days by farmer and horse. A single horse would pull the cultivator as the farmer put the reins around his back and held the handles. It was very important to make sure the cultivator didn’t take out the plants. The farmer and the horse would spend an entire day walking up and down the fields.

Unfortunately by the 1920s, a disease known as “white pickle” afflicted Long Island cucumber crops. The cucumbers would grow to about 2½ inches in length, and then they would turn white and become very hard. There was absolutely nothing the farmers could do. No remedy could be found. The farmers were forced to stop planting cucumbers, and Greenlawn’s prosperous pickle industry came to an end. The processing plants remained open and continued to make sauerkraut from the cabbage crops, but by the 1930s it was discontinued and the processing plants were left abandoned.

Thanks to the Greenlawn-Centerport Historical Association, the memory and history of this important industry lives on in their annual Pickle Festival.

This year’s event will take place at the Gardiner Farm on Park Avenue on Saturday, September 21, 2013, from 11:00 a.m. to 4:00 p.m. Rain date, Sunday, September 22. Allen’s Pickle Works in Glen Cove supply the pickles for the festival. Pickles will be available for tasting and purchasing. Ten pails of pickles were offered at the first festival 34 years ago, and the pickle purveyors had hoped enough people would come and taste them. Now, all these years later, 120 pails of pickles are needed for the great number of people who attend.

Besides pickles, there are homemade jams, jellies, farm-grown vegetables and baked goods available for purchase, as well as hot dogs and roasted corn. A cheese vendor and smoked meat vendor will also be setting up tents. There’s food and fun for the whole family. Roam the grounds of the historic farm, see chickens and ducks, and buy Pickle Festival T-shirts. Children can enjoy the corn maze and take part in digging up potatoes in the Gardiner field. New for this year, children will be able to ride the old Lollypop Farm train, built circa 1952, which has recently been restored and will be set up on the Gardiner property.

A $5.00 donation gets you into the festival and also gives you membership in the Greenlawn-Centerport Historical Association until December 31. Children are admitted free. This event is the association’s biggest fund-raiser. Money raised goes to the upkeep of various historical properties owned by the Greenlawn-Centerport Historical Association including the Suydam House, located in Centerport, which was built sometime between 1710 and 1730.

So come out and support this wonderful and tasty event while keeping a bit of Greenlawn’s history alive.

This story first appeared in the Summer issue of Edible Long Island. Find more at ediblelongisland.com.