One of the most storied restaurants in the Shinnecock Canal is Brewster’s Seafood Market and Restaurant on the west side. 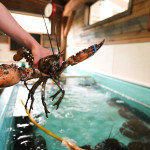 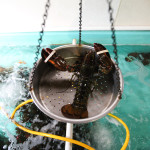 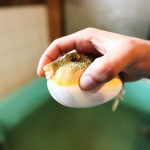 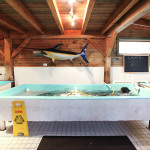 The Shinnecock Canal is a busy place. Boat traffic, traffic traffic and seafood restaurants hugging the shores of the waterway that opens the Peconic Bay into the Atlantic Ocean. One of the most storied is Brewster’s Seafood Market and Restaurant on the west side. It has been there for 35 years and was taken over by Russell Moran three and a half years ago. The former chef, a native Long islander, upgraded the store and expanded the restaurant, which is open for lunch and dinner seven days a week.

“We’re known for our lobster and steamers,” says Moran, pointing out that his store has the only live-feed seawater tank on Long Island. All the shellfish is kept there prior to sale or cooking. The benefit is sandless steamers. Such tanks are hard to get permits for, and Moran considers himself lucky that the tank came with the store.

On staff is manager and fishmonger Michael Glass, who is responsible for cutting and weighing all the fish, which Moran buys from local fishermen and wholesalers like Gosman’s and Mastic Seafood.

Like other areas of the food business, fish markets are responding to the demands of an ever-more educated public, which wants to know as much as possible about what they’re eating. Moran says people ask if the fish is local or farm raised and want to know how and when it was caught. Customers are also asking for more unusual fish—beyond the crowd-pleasing flounder. Brewster’s has fresh blowfish every day, which Moran says is plentiful this year.

Moran also notes a change in the fish in local waters. “Someone caught a salmon in the canal the other day,” he says. “And there are more octopus, more weakfish and tons of bluefish.”

Octopus has yet to show up on his menu but the breadth of fish dishes is extensive. For waitress Debbie Bates from Riverhead the thing to get are the fish tacos, which come with a corn avocado salsa. She also says the Monday through Thursday special of two pound and a quarter lobsters with corn on the cob and a baked potato for $26 really crowds the parking lot. Pair that with some ice cold local beer on tap and you’ve got the makings of a meal. In addition, Brewster’s has one of the few licenses for a smoking facility on Long Island. They use a cold-smoking process which turns bluefish, eel, cod, catfish, salmon, scallops and tuna into hors d’oeuvres and main dishes that rival traditionally smoked meats like pork. They’re kid friendly too. Staff members will supervise while children pet lobsters and watch eels swim in the salt water tank.

Moran also runs a catering business and is working with Dock to Dish, a new community fishery out of Montauk, which will soon be selling smoked bluefish that will be produced at Brewster’s. This doesn’t leave him much time to go fishing himself. “I love to fish,” he says. Kind of like the cobbler’s kids who have no shoes.