Another Way to Eat Bay Scallops

Turns out you can cook scallops just like clams and mussels, whole in the shell. 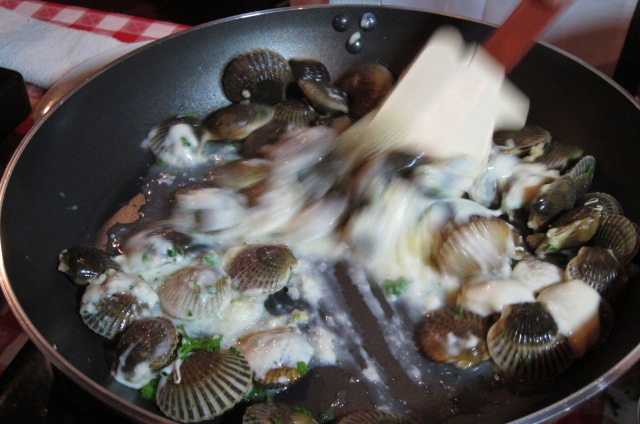 In July, with little splash in the media, the New York State DEC changed three regulations that will alter how we can eat our prized Peconic Bay scallops. “But how could that be,” you ask. “We’ve been eating those sweet adductor muscles shucked and seared for…ever!”

Turns out you can cook scallops just like clams and mussels, whole in the shell. And you can do that within their first year of life. So with this change, an entirely new shellfish product can enter the market: in-shell scallops.

Such is the way of the DEC, says Gregg Rivara, an aquaculture specialist at Cornell Cooperative Extension, who in his 26 years on the job has witnessed elected officials and DEC commissioners come and go, while members of shellfish cooperatives, including his wife, Karen, tried to change the rules.

Now he says, “It’s the only commercially viable bivalve shellfish that can be grown to market size in one season.” This eliminates losses from overwintering and reduces exposure to algae blooms. All of which should mean additional supply of this delectable seafood whose wild populations have started to rebound in recent years.

In November Rivara held a launch party at Grand Central Oyster Bar to introduce four oyster farmers who will add in-shell scallops to their stock, including Tom Cornell of Cornell Oysters in Southold. Cornell says the scallops are cultivated using the same method as the oysters, and that he expects to sell mostly to restaurants at $0.40 a piece wholesale. “All these years we’ve just been eating the muscle, throwing out the good stuff,” he says. “There’s more to it than that.”