Happy Ducks, Obsolete Root Cellars, and Other Signs of the Warmest January on Record 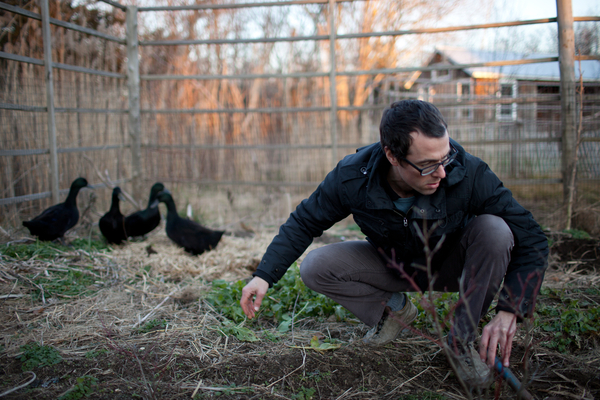 Our ducks have been plenty happy that their kiddie pool pond hasn’t frozen over and that they can still grub for worms in the soft soil.

I’ve been thumbing through the short, final chapters of Joan Gussow’s most recent book, Growing, Older. They’re humorous even if the themes include dying, lifelong regrets, sea level rise and climate change. The later geological preoccupations are shared by both Gussow and I—we both garden in floodprone areas—and the balmy, 60-degree afternoons this past weekend reminded me that the future-oriented predictions of climate scientists seem more and more to have arrived in the here and now.

It will be another couple of weeks before global weather watchers, like NOAA, release their monthly data, but my money says we’re on track for another warmest winter on record. On a Saturday morning seal-spotting walk to Oyster Pond in Montauk, we overhead a veteran hiker remark that he had never seen so many t-shirted folks on the trail at the end of January, traditionally the coldest time of the year. For our post-hike lunch at Hampton Chutney Company in Amagansett, we got to enjoy our lassi and dosas, on the outdoor picnic tables sans outwear (a very un-wintery thing to do). We bumped into Scott Chaskey, who was coming from a pick-up day at Quail Hill Farm, and who noted that the ground has yet to freeze at Quail Hill and the root cellar, packed with goodies for CSA members, wasn’t as cold as he’d like it to be. Had he known, he might not have pulled all the carrots and parsnips and beets in a rush just before the New Year.

But how could we know? At the annual Food Almanac event put on by Food Systems Network NYC, the panelists offered a number of likely and hopeful predictions. Thomas Forster said that New York City would continue to lead the world in urban-rural alliances to reverse climate change and other global challenges. American Farmland Trust’s David Haight predicted that the loss of farmland might come to a halt—it has slowed dramatically in the last five years–and begin to reverse this year. And Print restaurant’s pastry chef Heather Carlucci-Rodriguez, who also founded Chefs for the Marcellus, said 2012 would see the rise of chefs and restaurant workers as major opponents to fracking in Upstate New York: If there’s no clean water, then there’s no restaurant business, Carlucci suggested, noting that businesses ranging from the Park Slope Coop to Ommegang Brewery are considering quitting Upstate if fracking goes forward.

Cheryl Rogowski shared reflections from her family farm in Orange County, noting this time last year, the farm was under a yard of snow, and just a few months ago, post Hurricane Irene, the farm was under 8 feet of water. After cleaning up and digging out, Rogowski’s attention turned to what she called “weather management.” She has relocated her greenhouses and other important structures to the highest ground on the farm and is redoubling her efforts to extend her growing season and build the supply of vegetables she can sell year-round. “This has turned from a story of destruction to one of resilience,” Greenmarket director Michael Hurwitz recently told when he reflected on Greenmarket growers, some of whom lost 80 percent of their crop. (Resilience and adapatability—in the face of climate change and other challenges–are also themes of this week’s PASA conference, where I’m speaking on Friday.)

Climate change deniers are always suggesting endless silver linings to a warming planet. Although it’s likely that with longer growing seasons will also come weeds, pests and other threats once held in check by winter. Still, on my own homestead, our coldframes are as abundant as ever, and I wish I’d sown a cover crop of kale, tatsoi and other hardy greens over our whole garden. Our oyster cages still hang from the dock, with little threat of being iced in. The warm weather has been particularly friendly to our latest agricultural addition—four jet-black Cayuga ducks. Ducks have no problem with frigid weather: our breed was first domesticated around Lake Cayuga way up north. But as anyone who knows anything about ducks can tell you, they love water—splashing in it, diving under it and guzzling large quantities. On the handful of days when the mercury dipped into the 20s and 30s, the ducks emerged from their pen in the morning to stare wistfully at their kiddie pool pond frozen over. Their water dispenser–and our outdoor hose bib–had also frozen, so we toted a bucket of tepid water from the kitchen sink and filled a dog bowl for them. Better-prepared farmers would have installed an ingenious device called a frost-proof yard hydrant, which looks like an old fashioned water pump. The valve that controls the flow of water is buried below the frost line, so after you’re done dispensing water, the water falls back below this valve, keeping the above ground portion from freezing and bursting. It’s the next big farm investment we’re budgeting for, although I wonder if–like snow tires, cross-country skiis and other cold-season paraphernalia–we will need them less and less.

Or as Gussow might say in one of her endearing messages–part meteorlogical report, part philosophical reflection–she records on her answering machine: “You’ve reached the river front home of Joan Gussow. It’s a balmy 60 degrees in late January. Climate change is here. I hope we’re prepared.”