Congrats to Chef Jason Weiner, Who Cooks on Two Islands and Was Winner of Last Week’s Latke Cook-Off 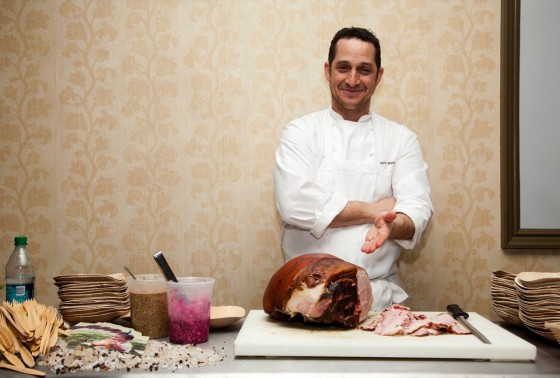 Congratulations to chef Jason Weiner of Almond restaurant–there’s one in Bridgehampton in Long Island and on East 22nd Street–who won last week’s Edible Brooklyn/Great Performances latke fest and cook-off at the Brooklyn Academy of Music. We’re especially pleased that Weiner’s latke, a last-minute entry, was topped with smoked bluefish caught by one of his Long Island staffers, and that it was mama Weiner’s recipe: An Edible-minded creation if there ever was one. The bluefish/potato combo would have made the baymen in Peter Matthiessen’s Men’s Lives proud.

On top of that, his table display included a bag of Long Island potatoes, with which all the latkes at the event (there were 17 entries) were prepared. (We drove the Foster Farm spuds into the city ourselves.) Weiner’s actually impressed us at Edible events before–a few of you may recall his Red Wattle ham, shown above, and his beer and cassoulet dinner, both from parties we threw last year. Those were both delicious, though probably not appropriate Hanukah fare.