Joe and Alexandra Macari and their bottles brimming with biodiversity. 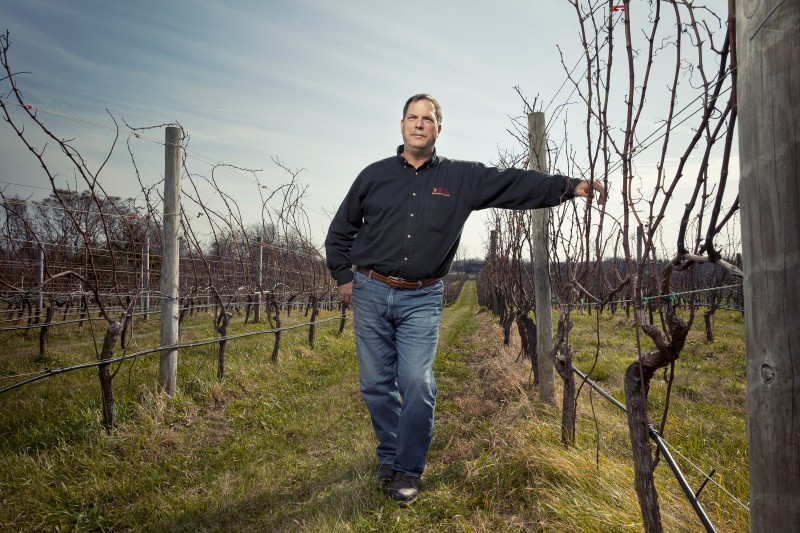 Bring up a word like “organic” around Joe and Alexandra Macari, and you won’t get the reaction that you think you might get from the couple behind this 16-year-old producer known by many for their organic-leaning approach to farming; in fact, it kind of feels like the “O” word around their 450 or so acres. Not because they don’t believe in these principles of farming, or because they aren’t very, very good stewards of the land—they do and they are. Very much so. It’s just that as far as the Macaris are concerned, the only thing you can reliably stick a label on is a bottle; outside of that, words are just words. The real stuff is in the soil.

“I think it [can be] a marketing tool to get people to buy things,” says Alexandra, when we talk about the countrywide embrace of organics in everything from meat to cleaning products to wine. “We know what’s in the bottle is right; I see the biodiversity in our vineyards.”

Since they started the winery with Joe’s parents—Joe Sr. and Katherine—in 1995, the Macaris have embraced the principles of biodynamics—the farming ideals developed by Austrian philosopher Rudolf Steiner in the 1920s. And while Steiner’s theories may be better known for their unconventional, seemingly loopy methods (head-scratchers like the iconic manure-filled buried cow horns and astrologically based planting schedules), their greater good is firmly rooted in a practical, holistic, all-encompassing view of the land and all that surrounds it. It’s about keeping and maintaining a healthy environment; something the Macaris are more than just a little passionate about.

“It’s a year-round business,” says Joe one autumn afternoon just around harvest time on a tour we take across the vast acreage Macari holds. This year, the wet, unpredictable season that was 2011 was hard on every farmer, and Joe is quick to point out some of the problems in the vineyard—browning leaves here, rot there, which is the big reason he says that going for organic certification in the Northeast is challenging. “A year like this? It’s tough,” he
says, shaking his head. “It’s blood and sweat and tears.” (And, as it so happens, Red Hook Winery, the three-year-old urban winemaking project owned by the cross-country force of Napa’s Abe Schoener and Robert Foley, New York’s Mark Snyder and Max Loubiere, and Michael Cinque rounding things out in Amagansett, Long Island, who purchase their fruit from Macari, nodded to Joe’s toil by christening their chardonnay “Joe’s Tears.”)

“Joe really takes it hard,” says Alexandra about plants that aren’t happy. “We try to cheer him up, and tell him, ‘It’s going to be great!’ but he’s pretty hard on himself if the vineyard isn’t happy.”

If you wound back a couple of decades, creating planting schedules based on the stars and planets in the sky isn’t exactly where the couple thought they’d be. Not by a longshot. Alexandra was an IVF nurse at Lenox Hill hospital—a job she thoroughly loved and still speaks passionately about; Joe was a property manager and real estate developer based in Jackson Heights, Queens. But 40 or so years ago, Joe Sr. bought more than 500 acres of potato farmland, renting the plots to local farmers and introducing Joe Jr. to the wide-open spaces and salty charms of the North Fork. After he and Alexandra met and married, they began to spend summers here, renting a house and stopping in at the now-defunct Mattituck Hills Winery for some casual swirling and sipping fun, buying a few bottles here and there to take back home. Little did they know they’d end up owning that very piece of property—where the North Road tasting room sits today—and its now well-established merlot vines.

By the early ’90s, it got harder and harder to leave the weekends behind, and Joe and Alexandra decided to move out to Mattituck full time. At first, Joe commuted back and forth while Alexandra was busy raising their then three children, with a fourth soon on the way. Joe Sr. had been keeping an eye on the burgeoning wine industry, and approached his son and daughter-in-law about giving a winery a go. They started with an ambitious 60 planted acres in 1995 on the land his dad bought all those years ago. “We thought we were too big!” laughs Alexandra. A couple of years later, they planted 40 more. And while they learned from their mistakes and successes (“Now we’ve learned that lower yields make for better-tasting fruit,” says Alexandra), they also learned that farming is a very imperfect, beautiful, frustrating occupation, but one in which the choices you make affect more than the ultimate life of the plants.

A conversation with a potato-farming friend clued Joe into the notion that many of the chemicals used in farming sprays were related to those used to create the Vietnam warfare herbicide Agent Orange—from that early point, he knew that this wasn’t what he wanted to work with, and he began to study the tenets of ecological and biodynamic farming.

“I’ve known the Macaris’ wines pretty much since they started,” says Chris Miller, wine director at the Living Room at the Maidstone Arms in East Hampton, whose list focuses on sustainably minded producers. “I look for family-owned wineries,” he says. “Places where [the owner’s] children play there. You especially find this in Europe where domaine owners plan on passing the property to their offspring, so they take care of land in a better manner; take it to a higher level. And the Macaris have done that.”

In fact, in the Macaris’ measured approach to chemical use, Miller finds some old-world precedent. “It’s what Europeans call lutte raisonnée,” says Miller. “What it means is if you’re in a region where it’s difficult or dangerous to the health of the vineyard to be 100 percent biodynamic and organic”—like in Long Island’s prevailing damp conditions, for instance—“you do the best you can and kill-off [pests and fungus] in the most gentle manner that you can so you don’t lose your vineyard. Macari is doing a wonderful job of this.”

Today, the Macaris have 200 acres under vine—which include merlot, cabernet franc, cabernet sauvignon, pinot noir, syrah, petit verdot, malbec, chardonnay, sauvignon blanc, and viognier—and from the get-go they eschewed chemical nitrogen in favor of a soil enrichment program fed from nutrient-balancing “teas” (a sort of
liquid soil booster that Alexandra coaxes from a mix of nettles and compost) and offerings from the mountain-high compost pile made up of leaves, vegetables, horse manure, and fish heads, tails and bones. They encourage the natural insect population and native area plants for cover crops. Joe has planted around 200 of those manure-filled horns around the property to jibe with Steiner’s soil and plant vitality program. And while Joe readily admits to the need to spray for things like powdery mildew, especially in years as particularly uncooperative on the East End as 2011, he never uses chemical fertilizers or insecticides. “There are a lot of things that are wrong between the cosmos and the earth; we need to fix it. And I know I’m both part of the problem and the solution, but that’s my struggle.”

The rest of the 450 acres, which include a second tasting room and its surrounding property in Cutchogue on the North Road that they acquired in 2008, are filled with a treasure of biodiversity. As lovely at the North Fork is, the beauty of their property is still something to behold, and riding around it feels a bit like you’ve entered another romantic world. Maybe the Loire Valley or perhaps even some gently hilly countryside in Virginia. But no, it’s just lovely Long Island, allowed to flourish and grow under good stewardship: There are wetlands, woods of birch and locust, thickets of cattails, goldenrod and wildflowers, and, if you go far enough, a cliff that overlooks the rolling waters of the Sound. Sequestered in large, open pens around the property are grazing longhorn cattle, rabbits, pigs, goats, turkeys and chickens. There are 70 beehives tucked into funny square houses that look like an oddball sort of outdoor filing cabinet system in three different spots scattered around the property. There are 30 acres of corn for feed; there’s an enormous greenhouse where they grow a mind-boggling amount of peppers, multiple kinds of tomatoes, eggplant, lettuce, herbs, nettles and a fig tree, too, nodding to Joe’s Frosinone, Italy-born grandparents.

With all the changing, thriving, growing life cycles on in the vineyard, there have been changes indoors at the winery, too. In July 2010, Paola Valverde of Chile, Macari’s main winemaker for seven years, left. In her place easily slipped Kelly Urbanik, a name you might know from her years spent at Bedell Cellars and Corey Creek Vineyard. A native of St. Helena in the heart of Napa, California, Urbanik fell hard for the East Coast, and the way she came to Macari was about as natural as it gets. She met Joe and Alexandra’s daughter, Gabriella, on a beach volleyball team, striking up a friendship in 2006 that would lead her eventually to the Macaris’ door.

Urbanik is a patient, observing and thoughtful kind of winemaker; laid-back and trusting of the good fruit Joe cultivates, with a desire for wines that really show a sense of the blocks in which they are planted, and the expression of the vintage from which they came. Her imprint tends toward wines that are the best possible expression of themselves; incredibly aromatic and much less manipulated, and some early tastings prove extremely promising. We barrel-tasted through a few of her reds from the 2010 vintage—a floral, elegant, plushy cabernet franc from a plot near Bergen Road; another from older vines full of pretty, ripe plum and blackberry notes with none of the abrasive greenness that cab franc can sometimes have; an expressive, intense, vibrant merlot from the vines that stretch out behind the Mattituck tasting room, all rich, juicy black cherries, blackberries and tobacco that already was such a journey on the palate at this young point in its life.

There are other recent changes, too, to keep up with their 17,000-case-a-year production. Around the same time Kelly arrived, the Macaris added a new barrel cellar, a new private dining room for special parties with a great little tricked-out kitchen down the hall, as well as a bright new windowed tasting area with doors leading to a patio that looks out upon the vines of Block C, the original merlot acreage. There’s the second tasting room, too, on Route 25, with a pretty copper-topped bar that the Macaris acquired from a nearby restaurant. And around the main tasting room in Mattituck are flags from other nations, representing the homelands of some of their 40 or so employees (and nodding to Alexandra’s Argentine family background).

“Wine has no borders,” offers Joe. “We don’t sit around drinking our own wine every night. If you don’t get out and try the wines and food of other places, how can you judge your own?”

But like any vineyard owner, he does of course judge his own, starting at the ground level. Because, really, it all amounts to a hill of badly grown beans to them if the land isn’t any good. “The soil is alive,” he says. “It’s hard farming, but doing things this way revitalizes it; it connects to everything.”