A Group of Farmers

The local chapter of the American Farm Bureau celebrates 100 years of advising and helping those who work the land. 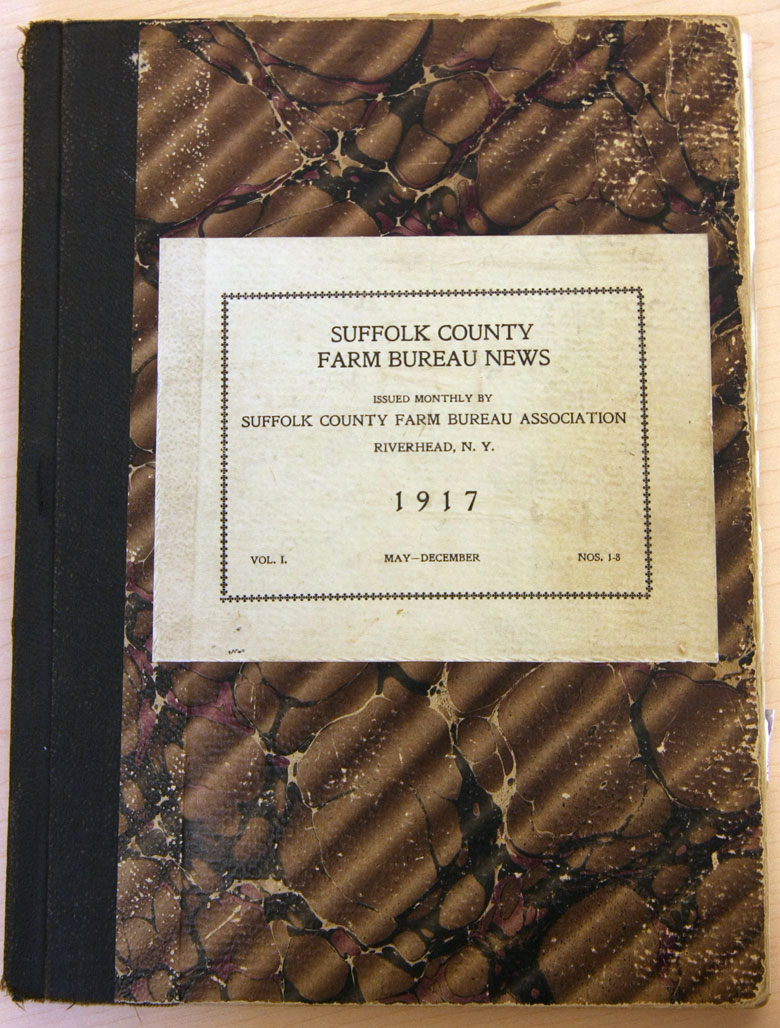 The 2007 Census of Agriculture reports there are 585 farms in Suffolk County. And while the number of farms continues to decline, the decline has slowed dramatically. Moreover, the number of acres tilled has crept up 1 percent—from 34,127 in 2002 (the census is conducted every five years) to 34,444 in 2007. The average farm has also gotten bigger—from 52 to 59 acres, while the average value of products sold per farm has jumped by 34 per- cent—from $309,035 to $415,270, with a total of $242,933,000 for the county, making Suffolk County the number one agricultural producer out of New York’s 61 counties.

The trend — a recent uptick in farming — is expected to continue; Long Island farmers are adapting and learning how to get more out of their land, despite the constant threats of development, taxes and shifting food markets. Agriculture has a future on the East End.

This isn’t an accident. It’s a concerted effort, not only by the farmers themselves with the support of a resurgent local-food movement, but also by one of the more powerful lobbying groups out there: farm bureaus.

The Long Island Farm Bureau is part of the New York Farm Bureau and in turn the American Farm Bureau, the largest advocacy organization in the world, which, like many big things, started small. Its inception dates back a century ago, when Binghamton Chamber of Commerce members observed abandoned farms, a tenuous food supply and the unease in Europe leading up to the first World War, and decided farmers could benefit from their own chamber.

So on March 20, 1911, the first county agent set up his bureau in the Binghamton Chamber. He patrolled the county in a horse and buggy, hoping to accomplish his office’s objective:

“To undertake propaganda work in the agricultural district…to make an agricultural survey of the territory, study the farmers’ problems, find their solution by the study of the practices of successful farmers, study the relation of the types of farming to local conditions of soil, climate, markets, etc., demonstrate systems of farming used by successful farmers of the districts, and conduct demonstrations with farmers, do educational work through the media of institutes, etc., advising with farmers individually and otherwise as to the best methods, crops, cropping systems, stock labor, tools, and other equipment.”

In the early days, what we now know as Cornell Cooperative Extension—the arm of the agricultural university that provides farm communities with information, advice and assistance—was part of the farm bureau, supplying the educational services under the aegis of the State College of Agriculture. (The federal Smith-Lever Act of 1914 would establish cooperative extensions nationwide as an addition to the land-grant universities already in existence.) Together they were mandated to teach agriculture and engineering, in order for the pub- lic to keep pace with the Industrial Revolution.

In due time, nearly all the counties in New York State had their own farm bureaus, and in 1917 the New York State Federation of County Farm Bureaus was created. The same year, the Suffolk Farm Bureau Association was formed (the much denser Nassau County already had a bureau) and started printing its monthly newsletter out of a Riverhead office. Membership cost a dollar for the year.

In 1955 Cornell Cooperative Extension and the county farm bureau split from each other, so the bureau could focus on policy and lobbying, and the extensions could focus on education and research. As farming shifted from Nassau to Suffolk, the two county bureaus merged to become the Long Island Farm Bureau.

More importantly, at the time of the split, “the leaders [of the Nassau and Suffolk bureaus] thought it was absolutely necessary, because of geography, that they had their own staff person,” says Gergela.

Around the country, farm bureaus have regional offices but are usually controlled by the state organization. In contrast, Long Island’s farm bureau pays and controls its own staff, giving it a unique standing within the state.

“We’re considered a regional farm bureau and a regional office,” says Gergela, “which makes us totally independent financially and separate.”

Gergela suspects the early organizers didn’t want their staff or agenda to be controlled by distant upstate decision-makers whose agriculture concerns are quite different than those on maritime Long Island. “It was a matter of control,” says Gergela, but the distinction also means a much higher profile for the Long Island Farm Bureau today, in the state and nationwide. “We are respected,” he says. “We can have opinions distinct from the state. And we’re included in big decision making.”

As one can see from the intentions outlined in 1911, the mission of Cornell extension and the farm bureau hasn’t changed much in the last century. Executive directors are still looking after a farmer’s main objective: selling what their land produces at a fair price.

And, not surprisingly, many of the same issues are still banging around, as evidenced by the articles in the early newsletters: what seed to plant, how to keep pests in check, how to work with the government and work with neighbors.

In 1919, Suffolk County changed the name of its newsletter to Suffolk County Farm and Home Bureau News. Now the ladies got a few pages for their home economics studies. Not surprisingly, again, much of what was topical wouldn’t be out of place in today’s news. One article states that children do better in school with hot nutritious lunches and that fresh air is good for them.

Aside from archives, reaching back into the history of the farm bureau is easy, as members and staff tend to stay on for many years.

Fred Perrin, director of member relations and membership marketing for the New York State Bureau, almost can’t remember how long he’s been in Albany. A former worker on a dairy farm, Perrin has been with the bureau for 34 years, starting in 1977 when the big issue of the day was the possibility of a nuclear power plant in Jamesport and Long Island Lighting Company’s plan to establish its transmission corridor right through prime farmland. And even back then, says Perrin, the questions of taxes and land preservation received as much attention as they do today.

Perrin’s dedication stems from his history with farming, some- thing he shares with some of the East End’s elected officials. State Senator Ken LaValle, who has been in Albany for 35 years, celebrat- ed his first birthday on his grandparents’ poultry farm, and Representative Tim Bishop’s family farm, where he helped grow potatoes as a child, is now part of Ira Rennert’s estate in Sagaponack. LaValle credits Gergela with much of the local farm bureau’s recent success.

“He came in at a time when things were changing in the world of agriculture,” says LaValle. “Joe is largely responsible for ensuring that the ag community has a seat at the table when it comes to government and public discussion on issues that effect the ag community.”

At the state level, the farm bureau works to keep money coming in for purchase of development right programs, which started in the 1970s, and to protect farmers with agricultural districts that supersede local laws.

At the federal level, Bishop says he’s been working with the Long Island Farm Bureau on immigration and farm workers and what he considers the potential of disaster if all farmers must run their workers through the E-Verify system.

In his tenure, Gergela says he’s seen land preserved by the purchase of development rights, the takeoff of the wine industry and now the impact the local food movement is having on farming out here. Given, he says, the value of the land and the number of people with the means to purchase tracts for development or their own homes, it’s still a marvel that farming remains a viable business on the East End.

One way to do this is to get the greater community involved. The Long Island Farm Bureau offers memberships for those who farm, and those who support the bureau’s “ideals and efforts and want to help preserve and protect our rural way of life.” Although farmer members ultimately decide what public policy issues the bureau will address, non-farmer members, which include landscapers, nursery operators, restaurant owners, grocers and farm supply companies, as well as citizens and homeowners, have become an essential source of farm-bureau funding, as well as an important swaying factor for elected officials. (In response to these demographic shifts, the farm bureau also concentrates on getting young people into farming, as the average age of a farm operator in Suffolk County is 56 years old.)

Beyond the fact that Long Island is one of the few bureaus in the nation with its own office and staff, Gergela notes two other important distinctions. Within New York State, “we’re the barometer of things to come,” he says. “Things that happen on Long Island generally take about 10 years to happen in Hudson Valley or upstate or any parts of the state. We’ve always been the leaders and the hotbed in agriculture.”

Gergela adds Long Island was one of the first places where aldicarb, the active substance in the pesticide Temik, was found in groundwater in the 1970s, a discovery that ultimately lead to new science and national legislation on pesticide use.

Second, in contrast to most other farm bureaus in the state, Long Island agricultural industry spans not just traditional farming, but also the state’s largest landscaping and nursery industry and the state’s working waterfront. Whereas upstate counties might be dominated by dairy farms, Long Island Farm Bureau’s perspective answers to a wider swath of growers.

“According to the state, we have roughly 600 farmers and 4,500 members. A good part of that is the landscape industry. Horticulture is half of our industry, acreage-wise, now,” says Gergela.
There are an estimated 250 greenhouse operations on Long Island, making up 60 percent of the state’s nursery industry—a reality that has pushed the farm bureau to push zoning laws to be inclusive of green- houses and other agricultural buildings.

The fact that Long Island’s farmer membership also includes fishers and fish farmers has broadened its mandate. Several years ago, when energy companies were proposing a natural gas storage facility in the Long Island Sound, an outcry from bureau member Karen Rivara and other Long Island Sound and Peconic Bay oyster growers swayed the bureau’s entire membership. Long Island Farm Bureau lobbied against the facility, and the plan was ultimately abandoned.

As the bureau has seen the limitations of land preservation and of working with grocers and other large buyers, it has invested its efforts in launching farmers markets and a series of “buy local” campaigns. “The local food movement is extremely important to us going forward,” says Gergela. “We feel that the best way to preserve our land is for people to buy local.” (Current bureau acting president Lyle Wells, a vegetable grower in Aquebogue, is in a recent Long Island Farm Bureau ad distributed throughout the region urging consumers to buy local.)

The local bureau’s success, says Gergela, is a direct result of the way a diversity of organizations has managed to work together. The cooperative extension and the bureau have the same goals as far as preservation and pesticide management; the Long Island Wine Council and the bureau often lobby Albany and Washington together; environmental groups, consumer organizations, and elected officials all have an interest in maintaining agriculture, and even the state’s department of conservation and the bureau are partners on many projects.