Edible Exclusive: What They Ate at the First Gay Weddings in Southampton and Manhattan

We shared in the pride people felt a month ago when Governor Cuomo made New York the sixth state, and largest state, to legalize gay marriage. 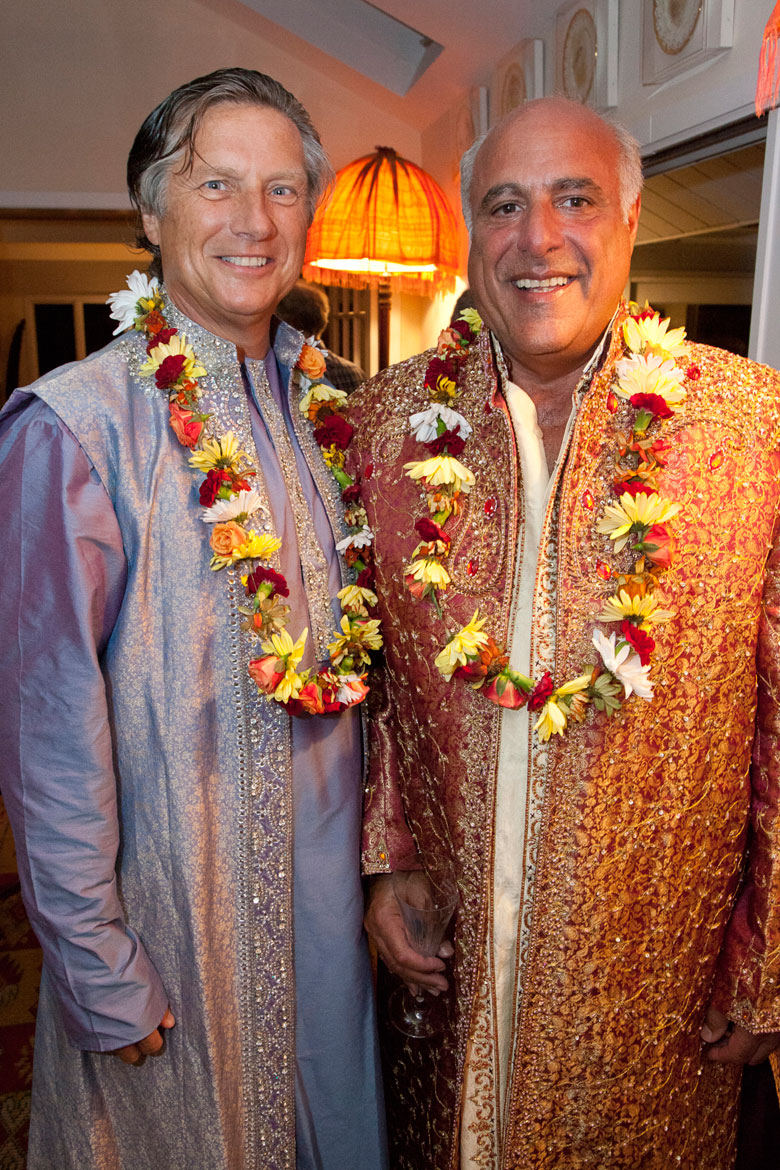 Editor’s Note: We shared in the pride people felt a month ago when Governor Cuomo made New York the sixth state, and largest state, to legalize gay marriage. And, naturally, we were curious about what food would be served at the first weddings sanctioned by this law. At Gracie Mansion, our friends at Great Performances had the priviledge of catering the Sunday-morning wedding officiated by Mayor Bloomberg, complete with Montauk seafood and Long Island wines, Hudson Valley vegetables and local cheeses, poultry and beef, NYC micro-brewed beers, and even bouquets and floral arrangements picked the day before the wedding from the fields of their own Katchkie Farm. (See the full menu here.) We  had the pleasure of attending one of the first gay marriages in Suffolk County, the Southampton town hall ceremony of Alan Ceppos and Frédéric Rambaud, followed by an all-day celebration at their home in Water Mill. Below is a play-by-play account of the incredible locavore-tinged international specialties that were assembled, as chronicled by one of the cooks, Laurel Berger, and photographed by Jenny Gorman. 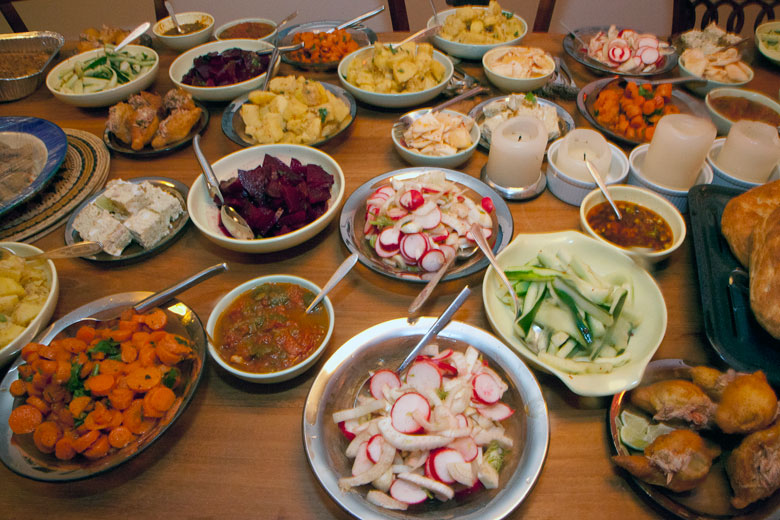 WATER MILL–The East End of Long Island is no outpost of North African culture. If you were to marry here, and if you wanted, say, a Tunisian delicacy like droigts du mariée, or bride’s fingers, at the reception, you might make them yourself (a bad idea) or you could ring Martine Abitbol, a Shelter Island chef reared in Tunisia and France whom I love to cook with.

Alan Ceppos and Frédéric Rambaud, the owners of The Hamptons Honey Company, wisely chose the latter course of action. On July 26, at ten thirty in the morning, the two became the first gay couple to wed in Southampton. Alan, a New Yorker with deep-set eyes in a moon face, and Frédéric, a slender, handsome Frenchman from Senegal, lived together in Paris for ten years, where they developed a taste for the Tunisian cuisine that Martine Abitbol grew up with. Having long enjoyed her food, which draws on the traditions of Tunisia’s Sephardi, Arab, Berber, and Italian communities, Frédéric and Alan engaged Martine to cater a feast for forty-five guests, to be held that evening. 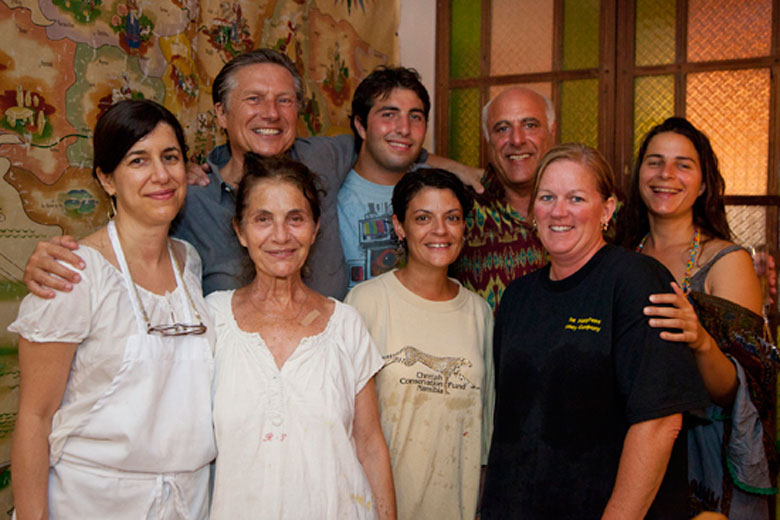 Recruited to help with the preparations, I met Martine and her capable daughter, the chef Anne Apparu, at the couple’s fifteen-acre farm and compound on the afternoon of the dinner. At sunset massive loaves of semolina dough were still rising, platters heaped with lamb awaited the grill, and buckets of summer vegetables had not yet been dealt with for the couscous. And, of course, there were those doigts de la mariée   – sheets of brick, a fragile tissue-thin pastry, filled, in this variation, with minced shrimp flavored with cilantro, lemon, and garlic, and rolled into neat scrolls before being tossed into the deep fryer. Though bride’s fingers are labor-intensive and fiddly – the pastry leaves must be kept moist or they will break apart in your hands — this wouldn’t be a Tunisian wedding without them.

Soon the guests were at the door, arriving from Europe, India, Africa, and the borough of Queens. A few locals filtered in. Checking my sheet pan of digits, some emaciated, others pudgy, I glanced at the clock, which read half past seven. Alan and Frédéric wandered into the kitchen. Dressed in caftans of shimmering silk, they looked like caliphs or extremely prosperous north African merchants. “More hot pepper!” Frédéric mock-commanded after tasting the méchouia, a mash of grilled sweet peppers, tomatoes, onions, tuna, capers, and preserved lemons. “But not too much, we don’t want the tastebuds overexcited.” Martine, who is small and agile, was a picture of serenity, as if it had not crossed her mind that unless all the elements of this meal came together snappety-snap, we’d be responsible for the first gay divorce in the Hamptons. 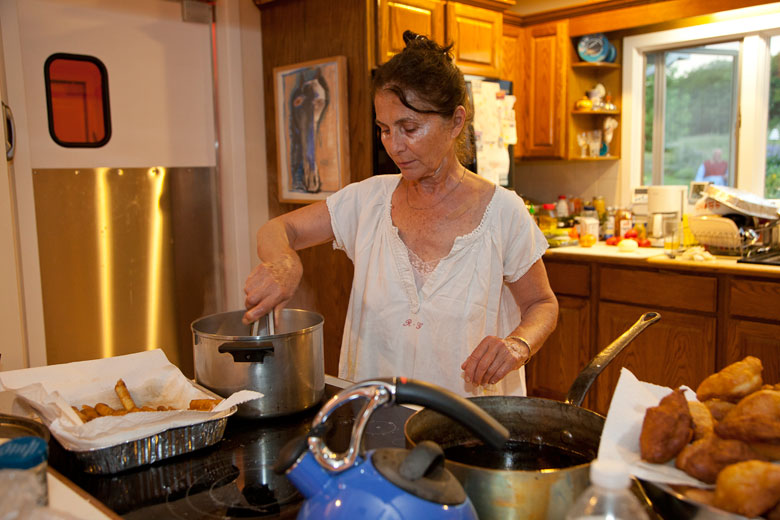 For a moment, I’d forgotten that she comes from a long line of brilliant cooks who are always in control. (I once witnessed her octagenarian mother bang out, chez Martine, an elaborate dinner for ten featuring pkaila, a Jewish-Tunisian wedding stew of beef and greens. Later Madame remarked that she had completed the most onerous bit the day before, at her Paris apartment. That an elderly woman managed to smuggle a suspicious jar of a dark, viscous substance — spinach paste  —  past airport security officials is a feat as impressive as it is worrisome.)

“Allez les enfants,” Martine murmured. “Un dernier effort et c’est fini.” And then she told Anne to take the minina from the fridge and prepare it for serving. Part frittata, part terrine, enriched with hard-cooked eggs and chicken, minina, eaten cold, is a Jewish Tunisian dish served at weddings and celebrations. (In the past, calves’ brains were a common addition, but Martine says that almost no one includes them anymore.) You bake the mixture in a cake pan until firm, slosh on a ladle of chicken broth, and cool it in the fridge. Some describe minina as a casserole but they’re wrong; with its custardy texture, it’s closer to a flan.

According to The Encyclopedia of Jewish Food, minina used to be prepared in a skillet. Once the top was set, the assembly was inverted on to a plate and eased back into the skillet to cook the other side — just like a Spanish potato omelette. This makes me wonder if Jewish exiles from Spain might not have brought the dish to Tunisia. How else to account for that mellifluous name with its ancient Castilian ring?

Anyway, when the wedding party arrives, you whip out the pan, cut the minina into cubes and have the servant offer it to the guests with small wedges of lemon, complemented by excellent sundry hors d’oeuvres while the cooks proceed calmly with the rest of the feast.

The bride’s fingers dipped in harissa were a triumph. The chicken with preserved lemons and okra was pronounced sublime. All savored the basbousa, a semolina and honey cake meant to evoke the sweetness of life. Perhaps it affected the new couple: at the end of the evening, as Anne made room in the freezer for a tray of leftover lamb couscous next to a stash of good old cherry blintzes, Frédéric happily assured us that neither groom has any plans for a second marriage. 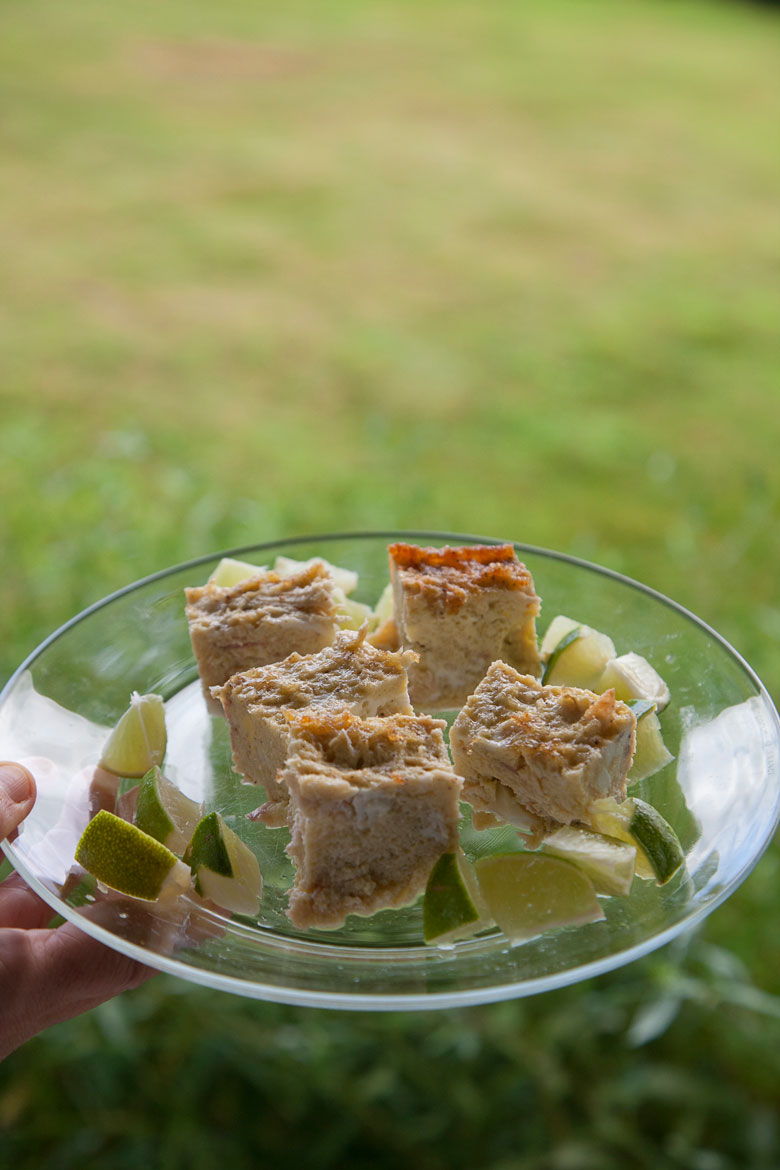 Preheat the oven to 375 degrees. In a stockpot, poach the chicken in homemade chicken stock or salted water for 25-30 minutes, skimming off any impurities that rise to the surface. When the chicken is no longer pink, remove and discard the skin, but leave some fat, which will give the menina flavor.

Pull the meat from the bones and roughly chop it. Combine the chicken with the hard-cooked eggs in a medium-sized bowl. At this point, if you poached the chicken in water, return the bones to the pot and continue cooking them for another hour until you have a good-tasting broth; otherwise, proceed with the recipe.

In a small bowl, moisten the bread with ¼ to ½ cup of stock. Grease a nine-inch cake pan with a generous quantity of olive oil. Warm the pan in the oven. (This operation should only take a minute or two. If the oil begins to smoke, clean the pan and start over). Wring out the bread and add it to the bowl with the chicken and hard-boiled eggs. Tip in the beaten eggs and season the mixture aggressively with sea salt and fresh-cracked black paper, then, wearing oven mitts, pour it into the prepared pan and cover the pan. Bake the minina for 15-20 minutes until firm. When it is done, turn off the oven, and ladle on a half cup of chicken stock, freezing the rest for another use. Return the pan to the unlit oven for another ten minutes or so until most of the stock has been absorbed. Chill the menina in the refrigerator. Serve in cube-sized pieces garnished with small wedges of lemon.