This article appears in High Summer 2011: Issue No. 31 of Edible East End.

A beer bar beckons those from east and west. 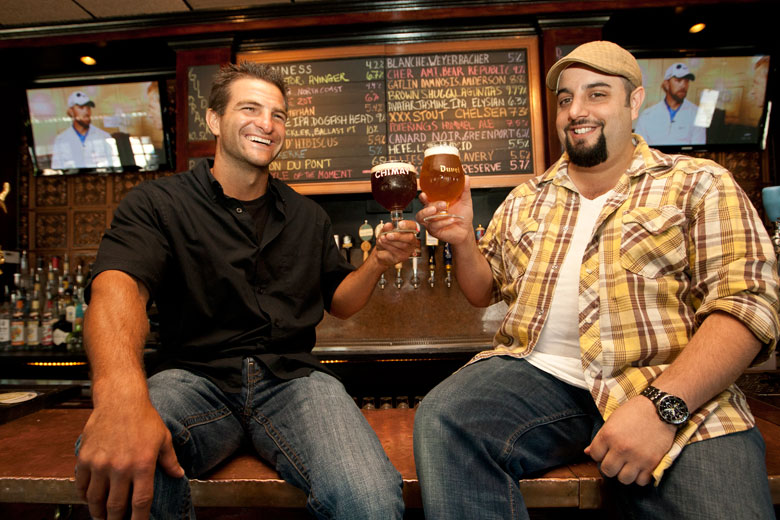 MASSAPEQUA—Amid a mélange of vibrant tin tacker brewery signs, some hexagonal from Trappist monasteries in Belgium, others slim-ovaled with logos of small-batch domestic operations, a white- wood panel stares over the bar at the Good Life in Massapequa Park with the following Abraham Lincoln quote: “Live a good life. And in the end, it’s not the years in a life, it’s the life in the years.”

It is these words that not only serve to encapsulate co-owner Peter Mangouranes’s personal narrative, but also how he hopes the Good Life is experienced by its patrons.

“We want to provide everyone with quality product and service,” says Mangouranes, a Boston, Massachusetts, native who opened the craft bar and pub-amplified eatery with partner Paul Oliva in May of 2010, after parting from ownership of East North- port’s the Lark Pub & Grub. “If after that initial sip or bite, they can sit back and say, ‘This is the good life,’ we know we’ve done right.”

Mangouranes’s emphasis on customer satisfaction via product superiority is nothing foreign to any industry; however, there is an additional piece he feels is integral to a business’s success: commu- nity. “A good business is part of the neighborhood like any person or thing,” explains Mangouranes, who apprenticed under his father, a chef, at the age of 10. “It’s a simple concept, but it’s become a lost art.”

The Good Life uses neighboring butcher Front Street Meats to ensure fresh ground beef for items like their eponymous burger, a rocked terrain of sirloin, Gruyère, crumbled bleu cheese and bacon jam; and regularly pours local craft breweries from their 24-line draft system (Greenport Harbor Brewing Company Hopnami and Barrier Brewing Company Gosilla are recent Long Island taps). They even extend invitations to nearby restaurateurs to col- laborate on their continuing beer dinner series, a marriage of brew and chew hosted on the second Tuesday of every month. 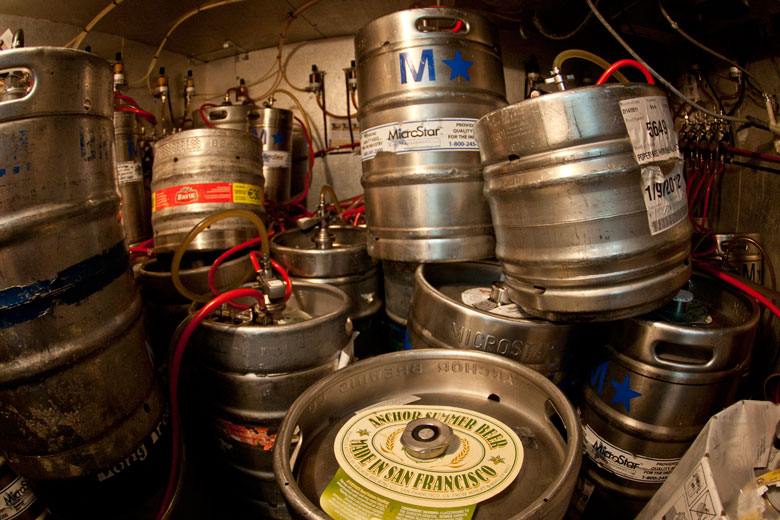 “Pete gave our chef [Derek Linker] carte blanche to pair anything he cared to create with any of the five beers being poured,” says Joshua Kobrin, co-owner of Salumi Wine and Tapas Bar in Massapequa, of the Good Life’s June dinner with Cigar City Brewing Company: five custom dishes, each crafted to accentuate the accompanying Cigar City beer’s flavor profile. Salumi’s creation, an English-style meat pie with pork trotters and beef tongue called “Foot ’n Mouth Pie,” was paired with the Maduro Oatmeal Brown Ale. “Pete’s not just an astute businessman; he’s a true aficionado of food and drink,” Kobrin adds. “For him, the beer dinners are a chance to go off the beaten path, explore, and just create a great dining experience.”

And the public agrees. Since their second dinner in July of 2010 with Founders Brewing Company (the inaugural pairing one month earlier, with Greenport Harbor Brewing Company, was half-comped to “spread the word”), the Good Life has sold out ev- ery 60-seat affair, including craft beer staples Sixpoint Craft Ales, Kuhnhenn Brewing Company and Avery Brewing Company.

For Mangouranes, constructing these multiple-course beer dinners with his chef team is something akin to a slow, organic art installation or music performance. “About three or four weeks prior, we taste the beers and discuss flavor profiles and what it is we want to convey with that specific pairing. We want to know the beer, and then the food, inside and out.” An initial menu may change “up to four or five times,” even minutes before the event. “You don’t really know what the beer will taste like that day, until,well, that day. If it changes, then so should the course. We want to be as prepared as possible for any variables.”

This meticulous work ethic has not only garnered praise from paying customers, but showcased breweries, as well, who have had their portfolios presented to craft-beer enthusiasts in a context that transcends the stand-alone pint or tulip glass.

“Our Massive IPA was served with barbecued hog wings, tobac- co onions, andouille sausage macaroni and cheese, and Good Life slaw,” recalls Rick Sobotka, founder and brewmaster of Great South Bay Brewery. The Bay Shore outfit hosted back-to-back dinners last October, each with its own unique menu. “It was paired perfectly and really opened up the beer. Each meal was a culinary delight.”

“I never like to take the easy way out,” says Mangouranes. “Even with our regular menu, I didn’t want boring pub food. In- stead of potato skins, we have mashed potato wontons. Almost the same, but with a fresh twist.”

Since the Good Life’s birth, Mangouranes has launched the Republic Pub in Farmingdale, an amalgamation of traditional Irish pub and American craft beer bar; and is scouting space for his next project, Chubby Ninja Brewing. The latter, a brewpub that will serve its own house-brewed beer as well as other selected suds, is slated to open sometime in 2012.

“I’ve always wanted to do a brewpub, but with other people’s beer, too,” he says. “I’ve had terrible times at places if I didn’t like their beer. Everyone has their own palate, and I don’t want to alienate that.”

Chubby Ninja included, Mangouranes plans to open “six or seven” more establishments by the age of 40 (he is 36 now), cit- ing his yiayia (Greek for “grandmother”) as the force behind his progressive spirit.

“My yiayia is 93 years old and can feed 14 people in a minute’s notice. Her house is still immaculate. She’s my inspiration.”