This article appears in High Summer 2011: Issue No. 31 of Edible East End.

A couple starts to harvest our region’s most abundant—and flavorful—resource. 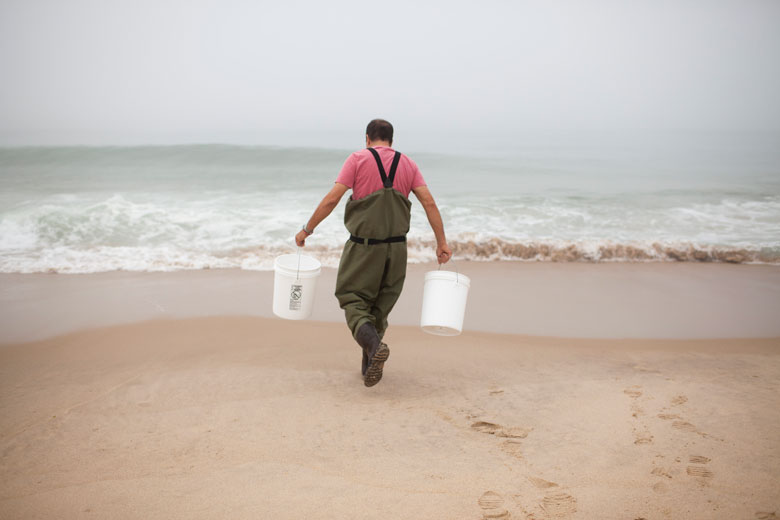 “There’s a way that the East End of Long Island smells,” says Peter Shelsky. “It’s that beachy, oceany, salty smell. This salt really captures that in a jar.” Shelsky, a chef and caterer who has worked at Kurt Gutenbrunner’s Manhattan restaurants and Danny Meyer’s 11 Madison, is referring to the Hampton’s newest small-batch product Amagansett Sea Salt, harvested from ocean waters off the hamlet’s beaches. Tiny, handsome jars of the plain and flavored salt line grace the shelves at the chef’s new shop, Shelsky’s Smoked Fish in Cobble Hill, Brooklyn, which opened in mid-June. 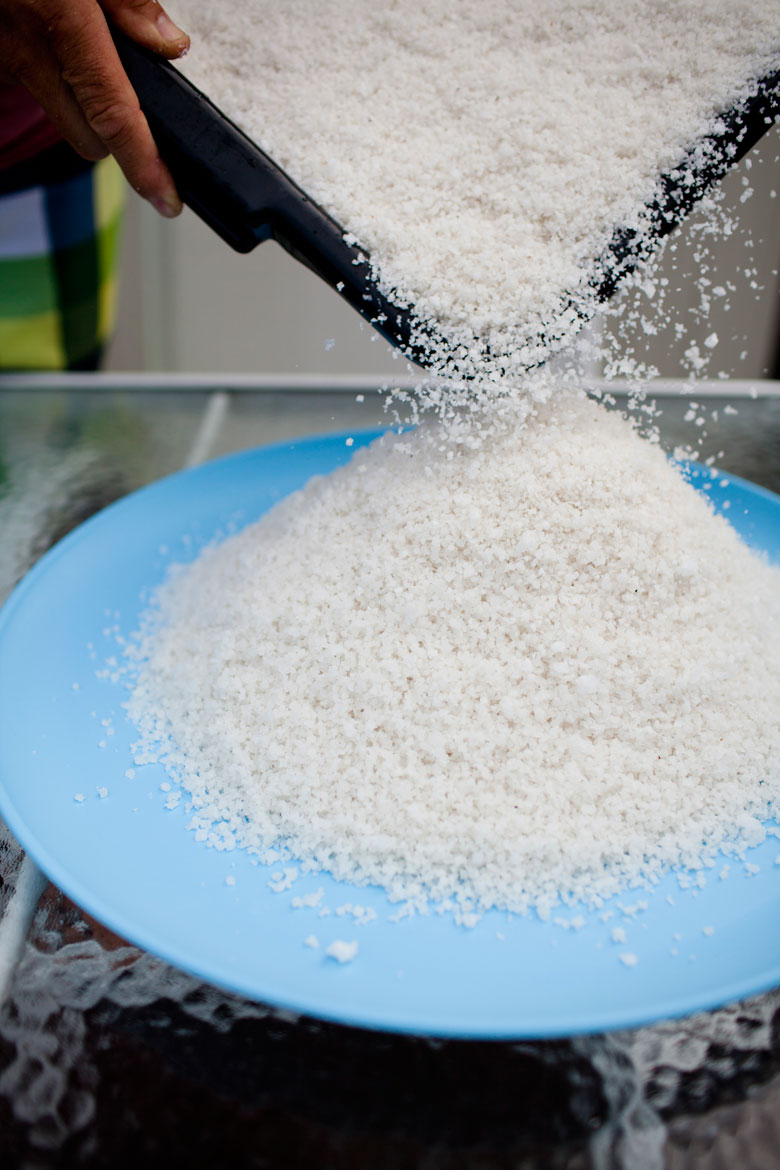 In our food-miles-fixated world, East End chefs are eager to try out a local salt— a product that seems so logical in a maritime region. Some restaurants already have it on the menu—lemon zest on diver scallops crudo at Nick & Toni’s Café in Man- hattan, in salmon carpaccio at Tutto il Giorno in Southampton. Montauk’s South Edison is sprinkling Amagansett Sea Salt on its organic saffron quinoa with a slow poached egg, and its chefs are playing around with several more of the flavored salts. Carissa Waechter of Carissa’s Bread calls it a winner on her leek focaccia, and itches to try a new coffee-flavored salt, which Natalie is testing, on her brownies. “Salty mocha,” she says dreamily. Gramercy Tavern just ordered a pound, says Judelson.

Amagansett’s Seafood proprietor “Irish Mike” O’Rourke ordered eight 24-jar cases (almost wiping out the Judelson’s opening day stock of jars), and now says gift packs of plain, lemon zest and herbes de Provence salt have been flying off his counter as the hostess season heats up. “And the margaritas we had the other night as we closed,” he sighs. “We rimmed the glasses with lime/mint salt. Amazing.” 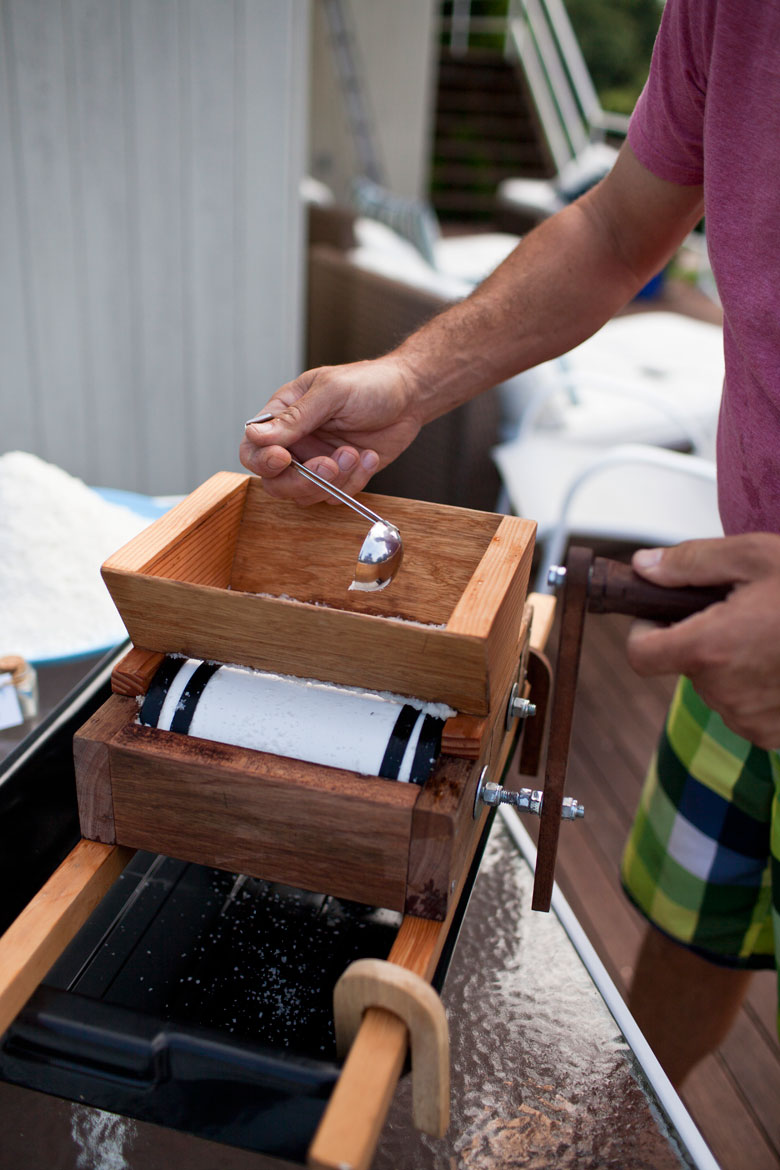 “The lemon zest salt complements fish wonderfully. It’s bright, briny and then mellows to a gentle sweetness. It’s a great hostess gift. Something beauti- ful to put on a table on a dreary day,” says Charlotte Sasso of Stuart’s Seafood, adding, “It’s so important to support our local businesses.”
This salt is never used in cooking, only for finishing. “I rarely use salt in cooking any more. Only put four or five grains of salt on a scallop,” says Nata- lie of grains that are about the size of small panko crumbs. “This jar (1 ounce by weight, 1.7 ounces by volume) will last a year,” she adds.

Can a grain of sea salt be worth such an accolade or price? Far pricier than iodized table salt, sea salt is coveted not just for its brighter, nuanced flavor, but presumed health benefits. Flavor and a more tempered impact on blood pressure derive from the 92 minerals it may contain. These are stripped from common table salt. Aluminum compounds (to prevent caking), corn syrup and iodine are usually added to the sodium salts that remain.

But sea salt’s flavor depends upon the size and shape of the crystal or flake, and upon its handling. It’s as temperamental as a soufflé. The Judelsons work in 100-gallon batches. Steven hauls buckets of water from the ocean, filters out sand and silt through fine-gauge filters and allows water to evaporate in the sunlight at just the right speed with the right amount of wind to yield 15 pounds of salt in two or three weeks.

Short-cut the process by baking in the oven or boiling, allow too much or too little sun, wind or time and it’s ruined, disgusting.

Judelson will only reveal vaguely that the salt is evaporated in “greenhouse-like structures.” A photo on his Web site amagansett- seasalt.com shows a crowded field of humped, white billowing shelters. “It’s too easy to copy.” Once the water evaporates, Steven, a former law- yer (like his wife) who went into real estate before the slump, grinds the salt in a grinder he built, fashioned after a barley grinder for beer hops. 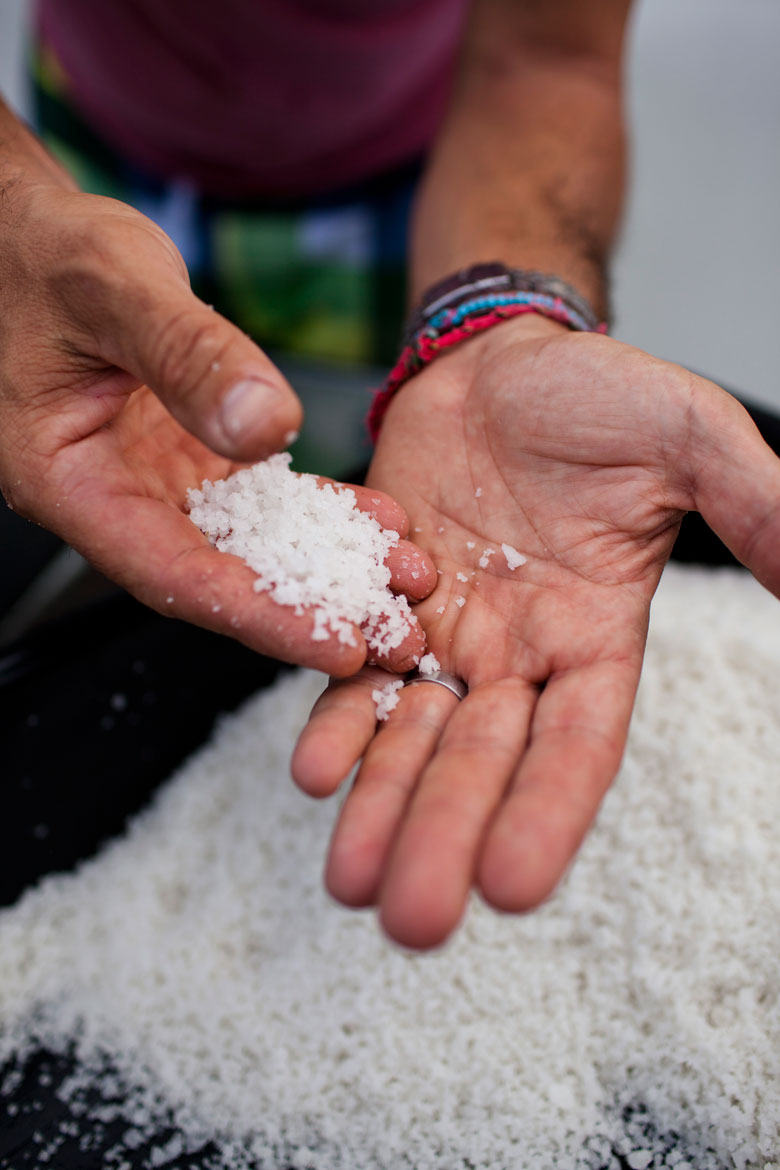 The couple spent two years fine-tuning their formula, though they had made sea salt as a hobby for 15 years. They still hadn’t gotten it quite right by their New Year’s Day launch. The debut salt dried too quickly, too well. It tasted terrible. The couple gave it to friends as a medicinal aid for soaking away aches in the tub. But by May 31 they had 100 pounds of kitchen-grade salt in hand, and may reach a goal of 300 pounds of artisanal salt this year.

They intend to stay small and local, reveling in comments like Shelsky’s: “This is like ocean spray when you lick your lips. Other sea salts never captured that for me, that awesome, fresh ocean taste.” Surfers riding in on super waves know it well. As one tweet to the Judelsons put it, “Savor the Wipe-Out!”