Foragers Unite (and Get the Scoop on Poke, Gingkos and Other Must Tastes) 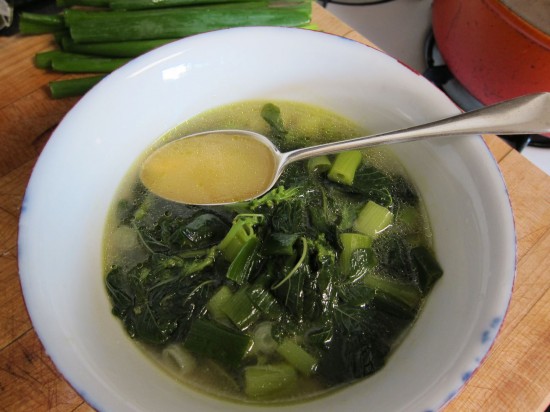 Could a cooling bowl of morog (maw-RAWG, the g is a soft guttural cat-hiss) or wild, edible leaves, help calm city tensions over foragers?

As the New York Times reported this morning, city officials are beginning to crack down on foragers, just as interest in foraging is beginning to crest. (Sister magazine Edible Manhattan‘s writing on the subject was implicated in the trend.) Alarming as this shift may be to anyone who enjoys the occasional wild-gathered food, we feel that foraging, on the whole, is still a great activity to encourage. It brings us into contact with nature, exposes us to forgotten and wild flavors, and may ultimately increase New Yorkers interest in preserving their parks, community gardens and other outdoor spaces that could grow food.

And we’re less concerned about any berry-stained wrist slapping, since Marie Viljoen recently started writing about foraging for us–giving us first-hand access to a growing Urban Foraging archive, augmented by our occasional stories on people like resident-weedeater Wildman Steve Brill, city beekeeping (before it was legal), and chefs who like to collect nuts in Prospect Park.

Of course, we would never advocate or encourage any foraging that is destructive–by overharvesting rare items or picking mushrooms without proper guidance–we feel that picking some incredibly ripe fruit, nibbling on robust weeds and gathering nuts that have fallen on the ground, especially for personal or family use. (Commercial use would be a whole other matter. A few years back, there was a rumor in local fishing circles that a New York City seafood company had commissioned some “fishers” to harvest the spring runs of Peconic Bay herring. Witnesses said they used the highly illegal technique of completely netting off the creek as to collect all the fish in it at that time, leaving the scene with entire pickup truck loads of herring.)

Yes, there are times when even avid foragers should resist. Those perfect sumac buds that are peaking on the Highline right now are just too pretty to clip for tea, and the onlooker-to-tea-drinker ratio would be way prohibitive. Better to duck into Chelsea Market, or sample the official Highline food offerings, like the ice cream sandwiches from Melt Bakery or the always-good, seasonal cuisine from Cleaver Company at the Porch, where wild greens (from Upstate farms) might well be on the menu.

Still, we remain committed advocates for city foraging. And for those of you who wish to stand with us in gleaning defiance, let us know where you like to forage in New York City. Feel free to keep the location and other details anonymous; as occasional rakers of oysters and clams (with a town shellfishing license in hand), we know that there is always some part of foraging that must remain secret.