Farmers Are the New Artists, and They Also Make Great Kimchi 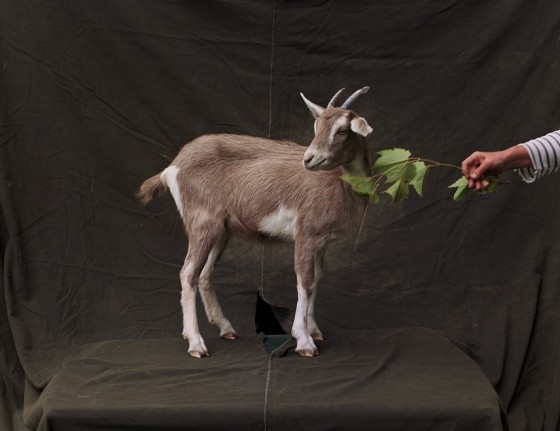 Farmers are really just agricultural artists, working for a balance between animal, land and humans—at least this is the feeling I was left with after one in a series of talks by young farmers/artists at the Gavin Brown enterprise gallery this month.

This session’s host was Art & Agriculture/Old Field Farm, a New Amsterdam Market vendor with a buying club. They supplied pretty packaged raw honey, coffee, pork rilletes and gooseberries among other artisanal food products, laid out amid aromatic basil and colorful portrait paintings by artist Peter Nadin (recently profiled with his cute, pink pigs in a Times magazine piece by Randy Kennedy)—one such piece, a cartoon-like, happy naked dude holding a 6-foot sub. (The scene of our modern renaissance man.)

To be a successful smaller, sustainable farmer these days one must be creative and see the added-value of knowing not only how to grow greens and raise livestock, but also how to make sought-after cheese and pickles and charcuterie. In other words, be an artist. It’s a philosophy, and getting it is the first step, said panelist Severine von Tscharner Fleming of The Greenhorns, a coalition and resource for young farmers with a documentary that opens in Brooklyn on Sunday and a guidebook. Young farmers are a growing but still small part of the population, says von Tscharner Fleming: “That’s why we all know each other,” she joked.

Also on the panel: a perfect example of today’s farmer, Connecticut art and music grads Sara and Brett Budde who moved to Sullivan County to learn how to farm, revive a dying way of life and serve their local community. These days their Majestic Farm houses heritage hogs, lamb, sheep, mushrooms, bees, chickens, goats, an orchard and artists in need of a place to stay or build sculptures. For them, being creative meant building a pit to make old-fashioned kimchi, hosting a duck dinner on the farm to discuss foie gras, and, eventually installing a smoker open to the public so other young food entrepreneurs can test things out and get their smoke-based businesses off the ground.

"One Acre Plot" inspired by Majestic Farm, by Andrea Hill

“Being a farmer here [upstate] is like being an artist in the city,” noted one panelist. An old-timer from the audience raised the thought that, “the old generation doesn’t talk. You artists… can’t stop talking,” implying that small-scale farmers need that cocky voice and experimental ambition. “Where do you see yourselves in five years?” he asked.

“Talking less,” said von Tscharner Fleming. Naturally a whole discussion followed on networking and the Farm Bill—there’ll be a Greenhorn “Possible Posse” recruit on September 3 at the Union Square Greenmarket. Then, 10 minutes later a panelist shouted: “In five years, there will be portable slaughterhouses!”

New-to-farming folks are indeed splashing new flavors onto our tables using the best of old and new concepts to re-imagine what it means to make food and to cater to today’s consumer. But then there’s the rediscovery of the simple jobs and sights and smells that humans used to experience day-in and day-out—”I wake to the sun reflecting off a cow’s hoof,” says von Tscharner Fleming: “I can tell you, it’s good for my mind.”

I left holding a bag of Strongtree heirloom, free-trade, certified organic coffee beans from Honduras—artisanally roasted daily in Hudson, N.Y. and sold through Old Field Farm’s spring/summer buy club or at the Greenwich Village specialty shop, Jeffrey’s Grocery. As I made my way out I heard, “Wait, take a sticker!”

“Eating is an agricultural act,” it read, quoting Wendell Berry. If you want proof, enjoy this squash shot on a Super 8 by the farmer/filmmakers at Old Field Farm, below.

squash from natsuko uchino on Vimeo.