Cherries and chevre? You can keep em. Don’t get me wrong – I love just about every single ingredient at the farmers market year round, and go into a real-food reverie this time of year, eating myself sick on sugar… 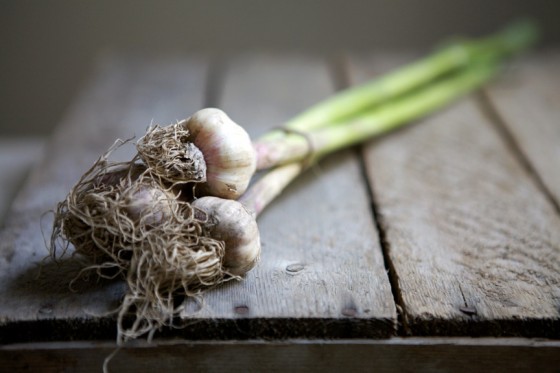 Cherries and chevre? You can keep em. Don’t get me wrong – I love just about every single ingredient at the farmers market year round, and go into a real-food reverie this time of year, eating myself sick on sugar snaps and bok choi. And, yes, I’ll eat my considerable weight in cherries over the next few weeks.

But if I were asked, Lear-like, to choose favorites from my whole family of farmers market foods, the blue ribbon would go to the humble hardneck garlic, especially in late June, which is why we’ve made it one our seven Ingredients of the Week for Eat Drink Local Week.  That’s because of all the locally grown wonders that taste so superior to their inspid supermarket brethren, I find real garlic sits across the greatest gulf from the industrial equivalent.

The garlic I grew up eating is known as softneck, and it’s easy to grow in huge volumes, tended only by tractors. Most of what Americans eat is grown in China. But family growers favor the flavor of hardneck, or topsetting, garlic—even though it’s more work to grow.

The hardneck types produce fewer cloves, fat and a snap to de-skin, all encircling a central stalk.  Each October, farmers who raise the crop spend evenings separating the heads into individual cloves that they plant like daffodils, pointy end up, a few inches below the soil surface. All winter the cloves sleep under the cloak of snow and long before the first day of spring, they send up determined little green shoots, pointing toward the distant sun. (When I farmed in the Catskills, I ate wild dandelion salad with garlic shoots every day for the month of May; it cleaned my blood after many winter roasts.)

For the next three months, the plant looks something like a scallion (its cousin in the alium family) or perhaps like summer corn. By June, the solid stalk has turned tough (hence the name hardneck) but the bulb below is forming cloves and there’s something delectable up top too. Also called topsetting garlic, this type produces a bud up above. If left on the plant it would form tiny burgundy nibs called bulbils which would scatter in the summer wind and live on as little chive-like shoots. But farmers typically snap off the bud before it blooms, harvesting it in the succulent shoot stage and selling it as scapes. They loop around like slithering snakes, and the white-and-green bulb at one end reveals the plant’s place in the lily family. One year, after arranging a bunch in a bud vase on my desk at Fortune magazine, I penned a haiku: They laughed at my scape bouquet but garlic, I know you are a lily.

I buy them buy the bushel each June (they keep a good month or two in the fridge) and chop them into everything. They’re more mild than coves so I add them by the handful to salads, pastas, stir-fries, fish dishes, even eggs. They have a toothsome crunch raw or cooked. One year I pickled them but find they’re best when they’re bright green and fresh.

Around fourth of July, garlic’s been in the womb of the earth for nine months and is ready for harvest. When the top half of the plant turns brown, farmers pull the whole thing, selling some wonderfully fragrant, its cloves alive with oils, and hanging the rest in the barn to “cure,” or dry; they’ll save the best cloves to replant and bring the rest to market each week until it’s all sold out, usually by winter.

If, like, me, you find garlic a reason for living, I urge you to read A Garlic Testament by Stanely Crawford, a New Mexico garlic farmer and beautiful writer who follows the crop from seed to harvest. It’s an especially wonderfully read if your mouth is full of the subject while you feast your eyes on its pages.

Speaking of feasting—in honor of Eat Drink Local Week, our partner restaurants are cooking up special menus starring our Seven Official Ingredients, including g-force.  I’m especially eager to savor the Green Garlic Bread Pudding at Benchmark, Green Garlic Sformato with wild mushrooms at Al Di La, lamb breast with green garlic vinaigrette at Txikito, and lamb burgers on an Orwashers bun with Sauteed Green Garlic with feta sauce at Jimmy’s No 43. See you there.

Never have I felt such pity for vampires.