NOTABLE EDIBLES: Get Your Goat 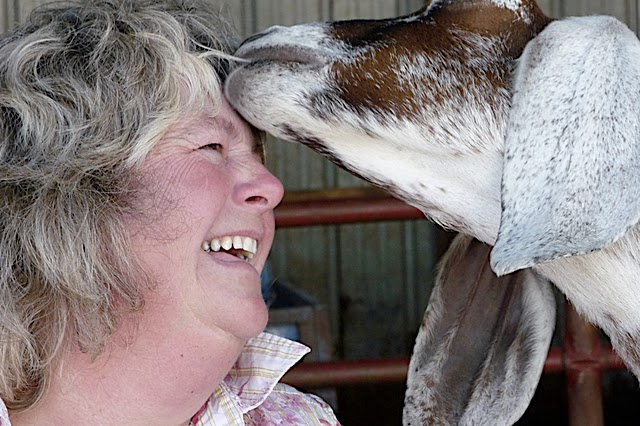 She almost didn’t make the drive, but Lynn Fleming took a deep breath and committed to the eight hours it would take to commute round-trip between Pine Bush, New York, and Bridgehampton for a Slow Food dinner at Almond restaurant. There, a five-course meal featuring the fruit of her farm, Lynnhaven, was on offer for the faithful. It featured goat — lovingly prepared by Almond’s chef, Jason Weiner — in many incarnations.

The soup course was a Scotch broth made with goat stock instead of the usual lamb. This was followed by a goat cheese crostino, then malfatti, a gnocchi made with goat’s milk, spinach and ricotta.  The main course, served family style, was roasted goat, cooked well done with shell bean ragout, arugula pesto and fregola. For dessert a goat yogurt panna cotta was accompanied by strawberries and black pepper. As is the standard for these occasional theme dinners, all the courses were served with Long Island wine.

For Fleming (shown above with one of her keep) it was gratifying to see so many people enjoying what she produces; Weiner also uses her goat at the New York City Almond. But you could tell Fleming wanted to be back on the farm among the animals she says she cannot live without.

Once a horse breeder, Fleming got her first goat in 1989; it was love at first sight. Soon she was running her own farm and breeding goats for show. A fully mechanized dairy was built, and she found an outlet for her cheese and meat at farmers markets three years ago.

Her herd consists of females used for milking, stud goats for breeding and the male kids, which are the ones taken to the slaughter house. “Is it my favorite thing to do?” she asked. “No.  But everything on the farm has a purpose. And I know how they are born, how they live and how they die.”

Cheese and goat meat are available at New York City Greenmarkets, at the farm and through the farm’s Web site, lynnhavennubians.com.  Learn about other Slow Food dinners at slowfoodeastend.org.