DIY: Probiotics by the Glass

My romance with kefir. 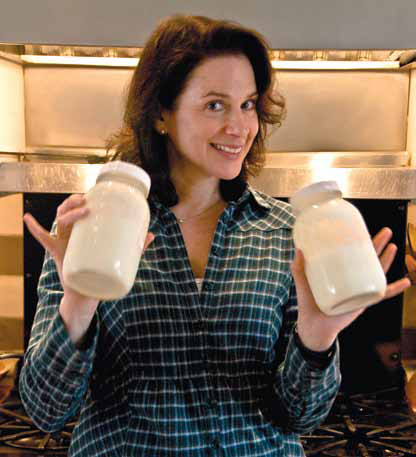 I guess you could say we are foster parents. Late last year, my husband came down with a head cold, and, as a result, we became responsible for the care and nurture of Norman and Yelena, two somewhat curdy, somewhat gelatinous life-forms that spend most of their time in Mason jars on our kitchen counter, covered by small paper bags. Each requires little more than a good cup or two of milk and a daily rinse of water for survival-far less than our human progeny. And what do we get in return? Clear skin, good digestion, much of our calcium requirements, and even relief when dealing with head colds-the rewards of tangy, slightly effervescent kefir by the glass, whenever we want it.

Kefir is a fermented milk drink that hails originally from the Balkans, according to Beatrice Trum Hunter’s aged but useful Fact/Book on Yogurt, Kefir and Other Milk Cultures. Muslims in the region thought the “grains” that produced the drink-actually clumps of bacteria and yeast-would be weakened by exposure to nonbelievers, and so for many years the tricks to preparing the “grains of the Prophet Mohammed” were kept secret. Not until the early 1900s, when kefir was found to be beneficial in the treatment of tuberculosis, did interest in this unusual drink grow more widespread. Kefir aids in digestion, not only by stimulating saliva flow, but also by enhancing friendly flora in the digestive tract.  It can be enjoyed even by those who are lactose intolerant, as the kefir grains actually keep themselves alive by “eating” the milk sugars that can be so difficult to digest. And, like yogurt, kefir is thought to have antibacterial properties, partly because the little organisms in kefir have been demonstrated to help prevent the growth of E.coli and other pathogenic bacteria in the gut.

Back to my husband’s unshakeable head cold. By the time he went to the doctor, he’d been sneezing and coughing for so many days that there was no question he needed antibiotics. He hates them, particularly the way they upset his stomach. In the past, he’s gotten some relief by popping acidophilus pills, so, while he was waiting for his prescription to be filled, I ran over to the grocery store to buy some.  There, in the organic section, I saw something called kefir, a drinkable product that claimed to have even more lactobacillus and other probiotics than yogurt. I bought a bottle, brought it home, and we both-hesitantly-sampled it. I suppose it could be an acquired taste, a little cheesy, a little bubbly, but we both liked it immediately.

Not only did my husband get through 10 days of antibiotics without any stomach distress, but a small patch of eczema on his arm completely cleared up. As for me, my skin had never been brighter; my nails became uncharacteristically strong. Was it the kefir?

I mentioned this possible connection to a friend, also named Susan, who I learned has been maintaining a single kefir culture since 1972, and she vouched for the kefir effect. Susan’s culture was given to her by a friend, and traces its origins to a Nova Scotian priest; she has kept it going wherever she’s lived, in every season of the year, for decades. Susan drinks at least a pint daily. She looks about 20 years younger than she is, and could probably go on a national road tour as a kefir guru.

“Why buy the bottled stuff when you can make it to suit your own tastes? There’s nothing easier,” she assured me. “Grow your own. I’ll bring some grains over next week, and show you how to care for it.”

In the meantime, I got so eager that I committed the ultimate sin. I bought some. You aren’t supposed to do this. In the culture of kefir cultures, the grains should be given away. No one owns these little cauliflower-like florets with the 5,000-year history.  But I had been noodling around on the Internet and saw that you could actually buy kefir grains on Amazon.com; they were about eight bucks plus shipping, and I thought, well, hell, I’ll try it.

Two days later, an envelope arrived from somewhere in Massachusetts, its contents a tiny glassine square with a scant half teaspoon of clean kefir grains sealed inside. Unlike other things that come in tiny glassine envelopes, these were opaque, tapioca-like little curds with a slightly lemony coloring. Following the instructions of the seller, I rinsed the grains in a fine strainer, placed them in a pint Mason jar along with a quarter cup of milk (I used 1% organic), and left them, covered loosely, overnight. The next day I poured the mixture, which hadn’t changed very much, through a fine strainer. I discarded the milk, rinsed the grains, and returned them to the jar with a new quarter cup of milk. I repeated this process for three days, along the way naming my grains Yelena. The milk wasn’t getting thick and tangy, but the grains looked plumper.

I called my kefir guru. “Susan, I need help,” I said. “Yelena isn’t anything like the delicious kefir I’ve been buying in the grocery store. She’s not producing. The kefir is thin, and tastes like slightly sour milk. I’m doing something wrong.”

Susan promised to come over, bringing some of her own grains, and run me through the kefir procedure she’d been using for nearly 40 years. And this was when I learned that kefir raising, like all parenting, has as much to do with responding to the child you have as it does with doing what you think is the right thing. Susan’s kefir, who we named Norman, was nearly beige, each grain separate and plump, his aroma a little like gym shorts that, though completely clean, have endured frequent use. “I don’t rinse the grains anymore,” Susan confided. “I like the taste better this way.”

He was thick, whey separate from curds, and to me he smelled way too intense. But that’s the way Susan likes him. She taught me several things Yelena’s grain mother hadn’t.

1.   The jar used for culturing the kefir needs to develop a nice fermented build-up. When you strain and rinse the grains, you can rinse the jar with a little water to loosen any kefir grains stuck to the bottom or sides, but you don’t want the jar to get too pristine. It should become an environment for growth. After a week, my kefir jars seemed alive even after I’d strained the day’s batch. There was a sense of eagerness when I poured the fresh milk over the rinsed grains, as if the kefir could not wait to begin eating the new milk sugars.

2.   The jars should be covered. Susan uses dark jars, like those that apple juice comes in. I cover mine with paper bags. Susan prefers a full jar with very little air in it, her logic being that air becomes a feeding ground for foreign microbes. I’ve had better luck with roomier jars; I now keep Norman and Yelena in quart jars, but I give them each about 12 ounces of milk daily. This leaves them room to expand and gives me room to shake them. And shake them I do-gently, without burping the lid to release air pressure-because I like the more effervescent kefir this creates.

3.   Susan does not rinse her grains and she ferments for longer than I do. As soon as I see a little whey separation, I strain and store my kefir. I don’t like the tart taste Susan prefers. I have rinsed Norman every morning since I got him, and his color is paler and his flavor more gentle now. The kefir he produces is thick and yogurtlike but the flavor is just slightly tangy. Yelena, who arrived bland, now has bubbly character, as long as I play to her strengths. She’s still too thin for my taste if I strain her in 24 hours, as I do Norman.  She needs a full 48 hours. Also, she is hungrier than he is.  She requires more milk to eat, or she starts to separate early and without interesting flavor. They are children, each with its own personality and needs. And, each, although this is where the child metaphor becomes unpleasantly Swiftian, equally delicious.

4.   When your stash of grains grows too large for you to support-the more grains you have, the more milk they need for survival and thus the more kefir you end up with-you can give them away. Put a half-cup of grains in a little milk and hand it to a lactose-intolerant friend with instructions for kefir nurturing. I just did this last week, and made my friend Katherine very happy.  You can also rinse, air-dry and freeze extra grains with a little powdered dry milk for about two months, or you can eat them or feed them to your pets, for an additional probiotic boost.  What happens if we want to travel, or if we want to slow the growth of our kefir for other reasons? The first thing we’d do is to store the kefir grains in fresh milk, in the refrigerator. This would buy us a week of travel time. And should we need to go longer, we can leave the rinsed grains in filtered water, in the refrigerator, for slightly longer, or so I’m told. At the moment, I don’t want to know.  I’m so happy with my foster family, I’m staying close to home.

Susan Scarf Merrell is a novelist and foodie who writes from her home in Sag Harbor.